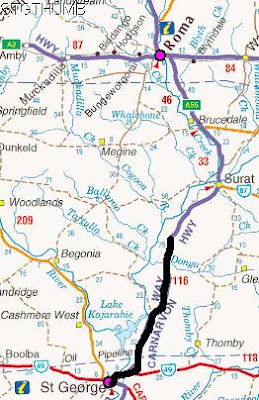 We got a nice early start this morning but unfortunately the wind was up well before us and it was blowing from the west at about 20kph so it was going to be a very strong cross wind for us. But fortunately for us once we turned to go north east to Roma there was alot of trees and shrubs with thick foliage which blocked out the brunt of the cross winds so the going was easier cycling along at around 16-17kph.
Something that wasn't in the camp 5 book were the truck stops along the Carnarvon highway - they are not really great rest areas to stay over night for either a caravan, campervan or tent but one thing they all had were rain water tanks which for us cycling are excellent drinking water sources. So for future reference for us they are at (starting from St George) 10km, 30km, 50km, 78km and then none until Surat.
It wasn't warm today around 17 degrees and cloudy (as per usual!) and I would say it was even colder than 17 with the cold wind blowing so every time we stopped we had to put the layers of clothing back on! the traffic today is very quiet (as it is a Sunday) a few trucks here and there but mostly caravaners but they all seem to pass us at the same time.
The Carnarvon highway shows alot of evidence from flooding and the road is in really good condition except for some places which are in the process of being repaired. 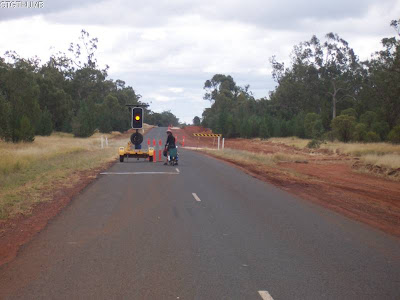 A few times along this road we would come to a traffic light that they have when there are roadworks but since it was a Sunday there wasn't anyone working so both lights at each end of the road works would be flashing amber.
At around the 45km mark we were riding along and next thing you know a 4WD pulls up alongside of us and asks if we would like some apples or mandarins and off course I am absolutely shocked and Neil says okay so they pull up in front of us and next thing I know 4 guys jump out and I think OMG but then I take a closer look and they are all well dressed middle aged men with smiles! They were all wearing kathmandu type clothing, all neat, clean, fit and healthy looking white colar workers! One pulls out a shopping bag full of apples and mandarins so Neil takes 4 mandarins and asks what is their story - they are going to Carnarvon National Park to do a 6 day hike (hence the kathmandu outfits!). So they ask us ours and believe it or not 2 of these men had adult children that had or are currently cycle touring! so we think that is why they stopped. the one that did the most talking has a daughter that is currently cycling along the coast (about 10 days out of Sydney). After they left we were absolutely chuffed that they stopped and gave us some fruit and the mandarins were really nice and sweet to eat! 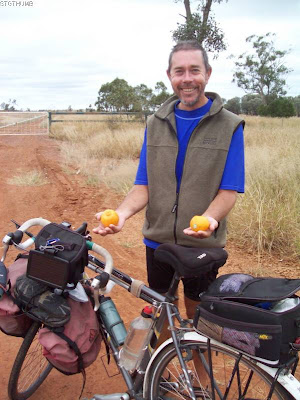 Doesn't Neil have a big cheesy grin!
At around the 70km mark we began looking for bush campsites and up to then there weren't many opportunities as for both sides of the roads the farm fences were pretty close but at the 75km mark the fences were well back and alot more bush camping sites became available. At the 78km water tank mark we topped up our water bottles as we had carried most of our water as we didn't know about the water tanks and we pitched up our tent at the 79km mark as there was a small track leading of the road. 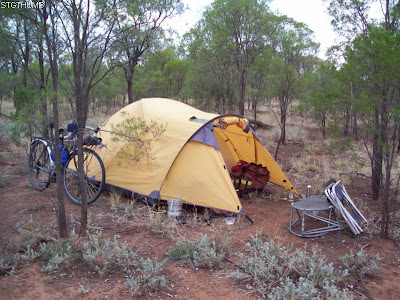 By now I was beginning to get cold from the wind so we set up tent, boiled the water for a cuppa and again for our British baths and then had an early dinner of curried tuna burritos and jumped in the tent to escape the wind!
Posted by Janet O'Brien at 6:01 PM