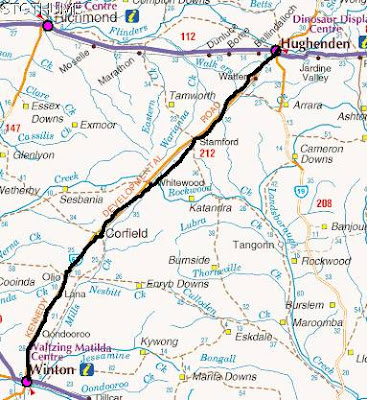 I decided to do this part in one whole blog rather than 3 individual day ones.
We left Winton early Sunday morning and Sunday is generally a good day to ride on the roads as there tends to be less traffic - well there was hardly any traffic on this Kennedy Development road not only on the Sunday but also on the Monday and Tuesday that we were on it! It was great as Neil rode most of the way alongside of me rather than behind me! As for the road well it was a nice road up until just after Corfield or when you changed from the Winton shire to the Flinders shire and then you had to negotiate through the pot holes and broken bits of road - they are doing major roadworks just before Stamford and heading towards Hughenden. One thing that I noticed that was very popular on this road was the use of grids, particularly in the Winton shire on the first day we had 5 of them to cross and then up to the shire boundaries we had another 4 on day 2 ... I hate going over these as you have to stop and get off the bike and gingerly walk over them!
The road is 2 lanes wide and relatively flat but I would say between Winton and Hughenden there were 100's of floodways! Up until about 30km from Hughenden the floodways were easy and very gentle but nearer to Hughenden they became more undulating but okay to cycle. From Winton they are beginning to pull up the railway line that runs alongside the road and on the other side they have dug a trench (started from Hughenden) and are laying the cable for the National broadband network.
Up to the first Telstra communication tower out of Winton the view is very scenic... 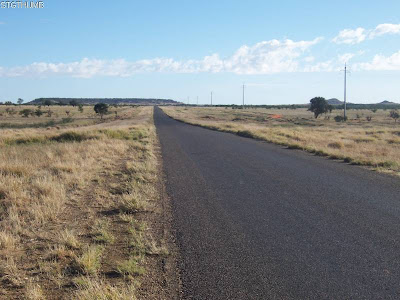 ...and then once over the crest at the top you are confronted with a wide open expanse just like between Longreach and Winton - the road is straight and deviates very little!
Below is a photo of were we have been ... 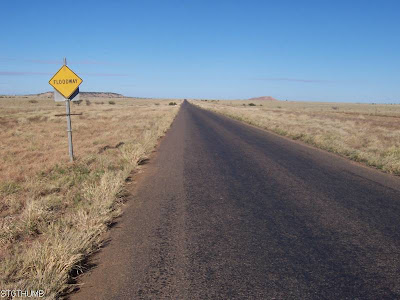 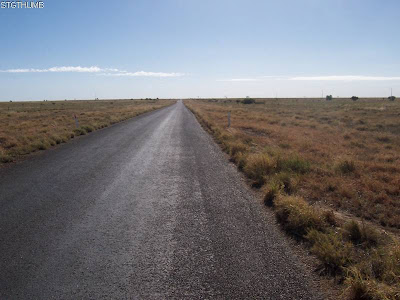 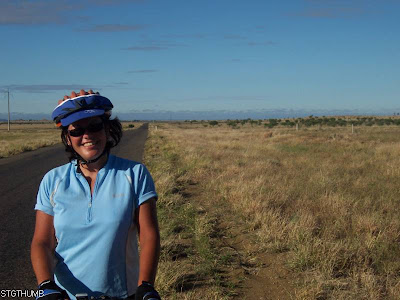 On our first day we did a long day (85km) and it was also a hot day too so we were relieved to get to Corfield Rest Area. 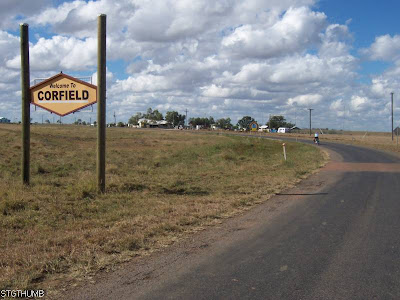 And to our surprise there was a sort of local pub opposite which opened it showers to the travelling public free of charge! Now this shower is just typical for out here in the middle of nowhere - a corrugated tin shack with a concrete floor and a shower head poking through the wall - the plumbing is a slight chip away from the concrete floor near the side of the shower! very rustic but loads of hot water so it was great at the end of the hot day! Corfield rest area is very small and just after we got there there was 5 other caravans that turned up (4 were part of a caravan club from Bendigo), one was already there, and one that came later had to park just outside the rest area so it was a very crowded place! but we got the best spot as we are in the tent and were the only ones that could get there! 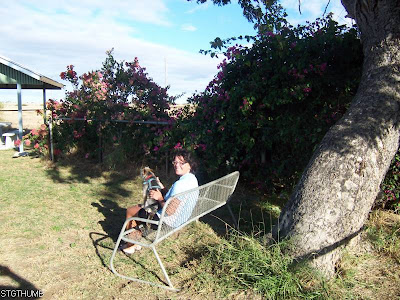 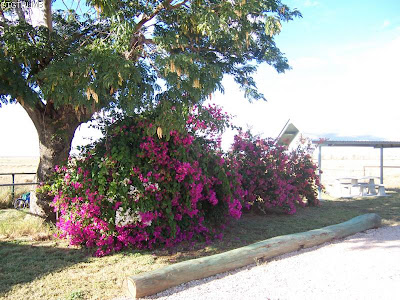 It was behind bouganvillea bushes and under a tree and gave great afternooon shade, there was also this wire seat there that we could use! It is probably the best camp spot we have had this trip whether it is in a caravan park or on the side of the road or in the bush! The only downside to it was the other people in the caravans! I tell you normally we don't mind some people and their very blinkered views but at this spot they all were just obnoxious, opinionated and irritating people and since the rest area was just so small you couldn't escape from them! One guy was just down right rude to Neil when giving his racist, ignorant views on politics, society and life in general when he realised that Neil didn't agree with him on everything he said and basically because the guy couldn't understand why Neil had opposite views to him he just said that Neil had nothing up there in the Library (pointing to his brain) and I just thought oh my god what an ignorant little person he was! Anyway that really upset me and I dwelled on that all night and most of the next day! But that is not all! In the morning while packing up (we had slept in and didn't leave until 9am!) the Bendigo caravaners (the men) decide to be pompous obnoxious prats and basically leaned on the fence making (what they thought were) funny snide comments about the metho bottle we were carrying and how it looked like water and how we maybe drinking that instead of the water and all we could do was just ignore them and continue on packing up - they soon got the message and walked away - I don't know just sometimes you really get sick of the people you meet - hence why we enjoy camping in the bush to escape them! Anyway day 2 while riding we discussed our friends back at the rest area and we're slowly coming to the opinion that there is not much compassion in the people we are meeting and that is very disheartening - back to a previous observation we have noticed that (compared to our last tour 12 years ago) that we don't get offered a cuppa or anything (except for fruit way back just before Roma) not that we expect it but just a little thought or consideration that we may not have all the luxuries. It seems that they are willing to chat to us and make us listen to their views but not offer us water, coffee, tea or biscuits! In fact one thing that really surprises me that they don't even consider that we may not be able to pick up water along the way and to check to see if we need some and offer us any (not that we need any we carry more than enough!) - in the past people have always asked us if we have enough water. Not far from Stamford we did have a white ute with 2 very young women in it pass us, then stop and turn around and come back to us and asked if we were okay for water - we said we were okay and had enough and thanked them profusely for just coming back to check! see and it was the young generation that asked not the older generation that have yet to offer us anything over the past 3 months!
Also just before Stamford we saw something that freaked us out a whopping great fat snake in the middle of the road - it was dead off course! but it was short and about as thick as Neils forearm - and it was freshly killed, we also saw 2 small freshly killed ones just before we got to Corfield the day before so we will have to keep an eye out for them now since we are in a warmer climate!
We got to Stamford mid afternoon and it was hot and in the camp 5 book it says the roadhouse has camping etc. well it doesn't now as the road crews that are repairing the road are staying there in prefabs so there is no room for caravans - there was room for our tent but we opted to pitch next to the tennis courts for a little peace and quiet and paid the roadhouse $5 to use their shower and toilets, then went over to the road crew to ask if we could fill up our empty water bottles from their rain water tank - they said that was okay! 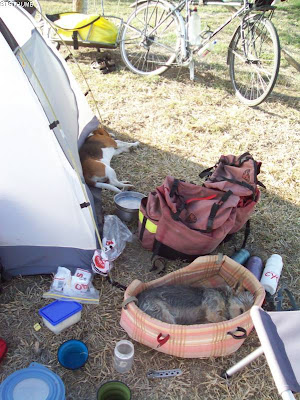 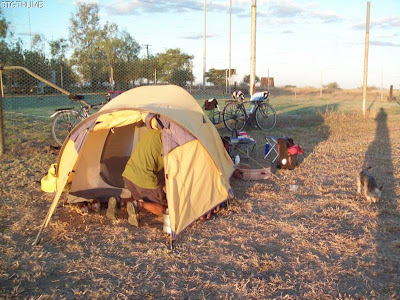 There was a beagle dog at the roadhouse and it decided to stay with us for the afternoon - it was a young girl dog and all it wanted to do was play with Kouta who in the afternoon after cycling all he wanted to do was sleep and got rather aggrevated with the beagle dog when she kept annoying him! So she tried to play as much as possible but decided to join Kouta in sleeping!
The next morning the sun took a while to get to the tent so we were freezing for a while and were ready to start by 8am (a little earlier so that we weren't cycling in the hot afternoon sun too much!) While packing up the Beagle dog came back to play with Kouta and since Kouta was well rested he played with her but after a while she got really rough and he was beginning to snap which just encouraged the Beagle even more to play so we had to put him in the trailer to rescue him!
At 15km we had to stop as for the first time Kouta jumped out of the trailer while cycling along and I was very lucky not to go over as I could hear what sounded like his paws being dragged along the bitumen and I knew instantly what he had done and had to quickly pull over (I almost forgot to unclip by shoes from the cleats too!). We couldn't figure out why he jumped and I looked in the basket and he had done a whoopsie again - he had diarrhea! So we had just passed a water bore 500m back so Neil took the basket back to rinse it out! We continued on cycling and it was slow going as we kept stopping to let Kouta out when he whined thinking he needs to go to the toilet again! he did a few times - we did manage to see these lovely flowers alongside the road and sometimes in the paddocks. 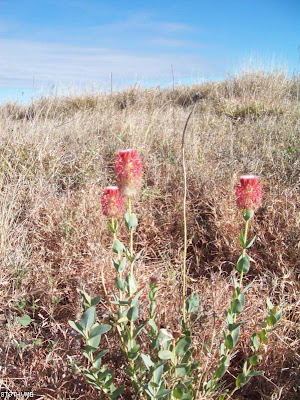 We had a cuppa around the 32km mark and while packing up Neil decided to get up from the ground too quickly and next thing you know he falls flat on his bum in the midst of fainting! crikey between him and Kouta I have 2 sick little puppies with me! It has happened a few times this trip but this is the first time he has fainted - he needs to get up from the ground slower with his blood pressure!
We got to Hughenden and Neil is really excited but he can't explain why! I think it has something to do with that how far along we have come from Melbourne but I am thinking we still are going further north!!! Maybe the fact that we are now in very familiar territory for him as he has been through here alot - and I can only vaguely remember Hughenden but Neil can remember alot even the caravan and that it has become bigger. It is a nice caravan park, full over night, and the camp kitchen is good - bbq, fridge, sink, microwave, tables/chairs, cook top, hot water urn but no toaster!
We will rest here today and will continue on to Charters Towers which is 243km away - not sure if we will do that in 3 or 4 days - 3 days of hard cycling or 4 days of easy cycling! - it depends on the strength of the winds - the prevailing wind is a headwind coming from the east direction so that will be in front of us all the way to Charters Towers
Posted by Janet O'Brien at 11:03 AM