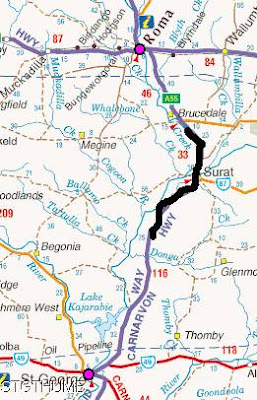 It rained a bit last night but the tent was mostly dry by the time we got up. We did wake up early and got out to face another grey cloudy day! there was no wind to start with and we started around 8.10am. After a hard day yesterday the legs felt a bit heavy this morning while cycling but after a few kms they soon loosened up. Since it was still early the road was really quiet and for the first 1/2 hour I would say it was just us 3 on the road! The wind picked up again at around 9am and was blowing from the south west so it was sort of behind us to Surat.
The 40km to Surat was rolling and with tired legs I had to drop a gear or 2 to get up the small rises but then again the small down hills were ideal as I didn't have to pedal and so I could get up out of the seat!
We took a quick break at a historical marker alongside the road at 17km - if I remember right it was to signify the change over of horses and wagons for the mail run from or to Rosehill - I should have taken a photo so I could remember it right! But at the historical site it gave us a good view of what was ahead and the scenery was really nice it is a pity it is so cloudy! 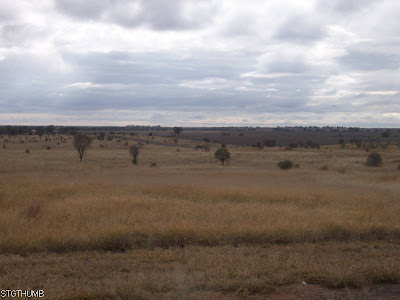 Just before we got to Surat there was a creek called Jones Creek and off course Neil wanted his photo taken with it ... why are there no O'Briens Creeks or Janets Creeks? 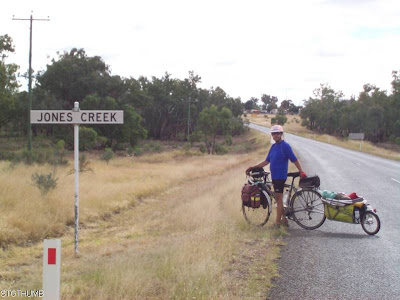 We got to Surat at around 10.45am and stopped at the small park opposite the state school. Neil pointed out that there was public toilet and showers! So we decided to have a shower since we only had a British bath last night and we were both a little grotty and sweaty and since we were going to bush camp again tonight and still not have a shower except for a British bath we thought that when we rock up to Roma tomorrow (2 days without a shower) we might be a little high on the nose! So it felt great to have a hot shower ... even though I did have mine with a very small brown frog! but it didn't worry me! One thing is for sure at St George and at Surat the shower water is really 'soft' and I washed my hair and it has gone all bouncy and soft on me! Since we had a shower (and also wash our cycling clothes while in the shower!) we decided to stay a little longer than usual and boiled up some water for coffee and something to eat and we even managed to wash Kouta!
One thing with Neil and the clothes he has bought along with him - they hardly take up any room but they are at the butt of all my jokes with him .. he has a pair of "mincing" tights (the ones with puma symbols all over them), he even has a pair of "mincing" bike shorts (they were a $5 buy from Dimmeys before they closed in Ringwood) and today he came out with his ... now I am not too sure what to call them ... but I think I will call them his "mincing" ballerina tights!!! 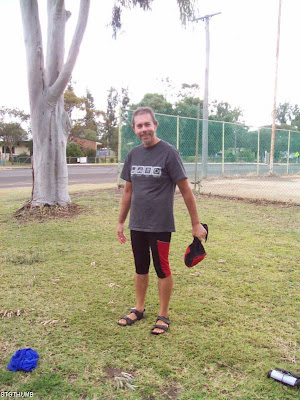 Now Neil informs me that a Japanese cyclist we saw last year had a pair on ... so he thinks that justifies bringing them along ... I inform him that the Japanese guy was bulky enough to fill them out where as Neils pair just hang of him ... why? ... because they were $5 from Dimmeys (again!) and they had strange sizes and even though they were too big for Neil he still bought them because they were $5 and he couldn't pass up that bargain!
We didn't leave until around 12.15 and even then we still had to find somewhere in town to stock up on drinking water and buy a loaf of bread. We finally found the drinking water and a loaf of bakery bread cost us $4.30 !!!
We did pass a strange looking building and Neil had passed through before and took a photo of it and he wanted to take a photo of it again with Kouta and I out front. 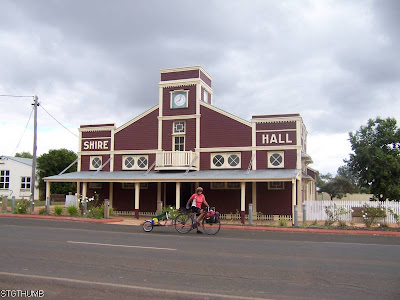 This is not the council building or anything like that (that is around the corner) but I suppose the local hall ... it looks really 'country bumpkin' like or something out of Dukes of Hazzards!
We finally left around 1pm and just north of town was a fishing club area that is a free rest area with toilets (not too sure about a shower) and when we passed there there were heaps of caravans there and by the looks of some with their laundry hanging up on makeshift clotheslines some were there for quite a while! We wanted to continue on for at least another 30km so then tomorrows ride is smaller.
We continued on and 15km north of Surat there was another water tank but we didn't need to fill up with water we already had enough. By now the legs were getting really weary and the road had swung around to a north west direction and believe it or not the wind had also swung around to a west north west direction! So we were relieved to find a nice little bush campsite at about the 69km mark which would leave us about 52km for tomorrow! 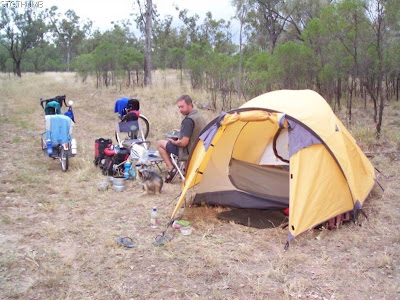 We found a driveway and that lead us to what looks like a stock route as there are cattle hoof marks everywhere and so we are pitched right in the middle behind some shurbs and the road is about 50m away but again it will be a quiet night.
For dinner tonight we had weetbix, apple, dried fruit and nuts and yoghurt and also 4 slices of bread and honey/jam! Lovely - we decided that since I got a 1.2kg weetbix at St George there is no reason why we can't repeat our breakfast at dinner but have a little more (Neil had 5 weetbix and I had 4!) It is a completely nutrutious meal and we will have it again tomorrow for breakfast!
Even Kouta had a double meal - we gave him a meal at lunch and again at dinner ... I think he is becoming like Me ... always hungry even after I have eaten!
Posted by Janet O'Brien at 6:17 PM