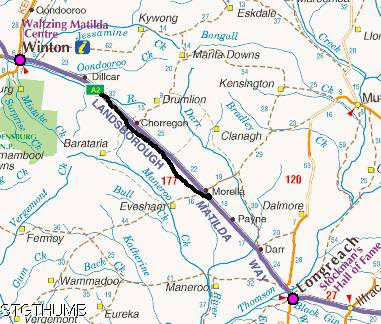 It was warm last night so sleeping was a little broken with waking up hot and sweaty. While packing up this morning an empty cattle train passed by us and tooted! We wondered if there would be any trains throughout the night as the road is following a train line up to Winton ... since it was empty we guessed that it was going to pick up cattle at Winton and come back down ... and we were right as we saw it later on in the day around 1pm going back towards Longreach ... and he tooted at us again - he must have recognised us! Speaking of recognising us ... we are beginning to think that the road trains are the same ones every day! as they are begining to toot at us and wave alot more - so either they are chatting on their radios and telling the other drivers about us or they have a set run and every day they see us!
This morning I saw something that really surprised me, albeit it was dead, and that was a small orange and white striped snake. It was in the shoulder and I looked down and there it was - it was killed that morning as it looked glossy and fresh - so it must have been warming itself on the road and a car ran it over. We haven't seen a snake for a while and thought that we should be seeing them soon as it is very warm up here.
The wind today is yet again a very strong wind coming at us from the side. Again the road is still straight with no bends or turns. It also doesn't have many places to pull off the road to take a break so when the opportunity arose to get off the road and lean the bike against a fence/gate we took it! 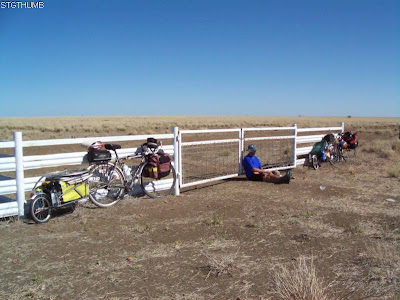 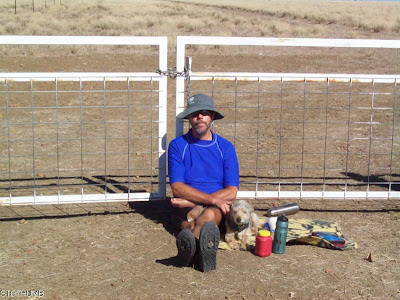 Since Neil is carrying the spare wheel we can't get at our chairs when taking a break so we now sit on Koutas blanket to have a cuppa!
We came across a new rest area that is close to the road and has toilet it was about 115km from Longreach but our next rest stop was still another 20km away so we continued on to Crawford Creek Rest Area (which had a tick in the camp 5 book which means that it is highly recommended!) and the road actually had a bend in it to get to the rest area (but then it curved back to resume its straighness!). 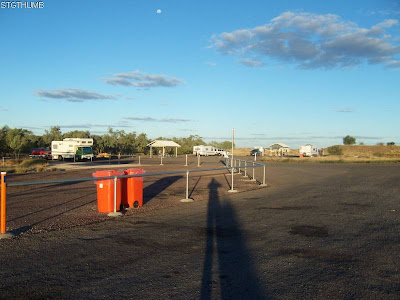 It is a huge rest area and had toilets and bore water (so we could have a British bath again). The council had ashalted the entire area or else it would have been just dust and with the amount of caravaners there last night I can understand why it is important to have it asphalted! At count the next morning (allowing for late comers last night) there were 18 groups in total and we all had ample space! 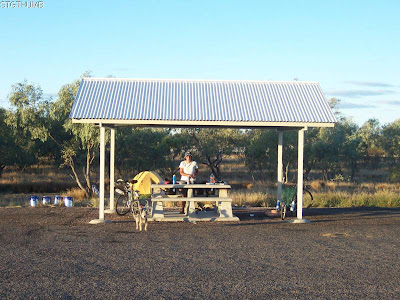 Neil and I even grabbed one of the many sheltered tables there!
In one of the shelters up inside the roof some finch birds had made there nests 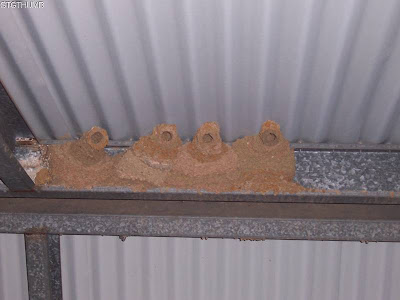 When I went to take a photo I managed to scare one of the birds (unintentionally) so it began to flitter away from the nests so if I had treaded a bit more quietly I may have got it at one of the wee small doors in the nests!
Off course being cyclists and travelling with a dog that sort off attracts a fair bit of attention from passerbys and this evening we had quite a few wanting to chat to us - and off course they all mentioned that Australia now has a new female prime minister and off course everyone has their opinion about her! Even on the ABC radio the whole nights show was talking about what had happened and how she really wasn't elected and how nasty the party had treated Kevin etc ... blah blah blah!!!
Posted by Janet O'Brien at 12:35 PM