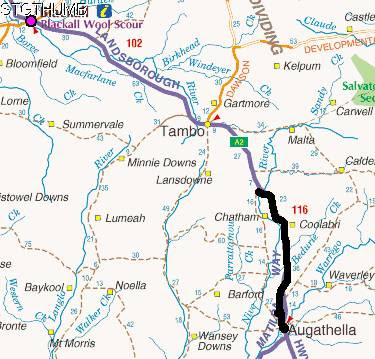 At the end of the last posting we had a series mechanical problem with Neils bike - basically his back wheel had a series of fractures on the rims around some of the spokes - we aren't sure how long it has been like that or how long before the wheel would collapse. Our first response was of all the places to have a problem like that - we are in the middle of no where when it comes to bike shops, at least 400-500km either direction before you come across a bike shop that might have Neils wheel size. So after trying to find our nearest bike shop on the internet and that would be at either Longreach or Emerald we took down their phone numbers and rang them the next morning - the one in Emerald had one in stock and is posting it to the local post office at Barcaldine and we will pick it up there on Tuesday as soon as the post office opens! How lucky is that - that the uncommon wheel is in stock and the guy was happy to post it to Barcaldine for us! So with that problem solved we were able to leave Augathella around 9am - a bit late but there was a tailwind so that would help us along.
Since we have been in Queensland we have had numerous road trains overtake us and I have never managed to get my camera out in time but with a little luck while we were on our first break this morning I managed to take a photo of 2 that passed by! 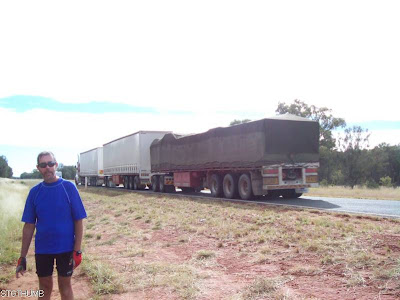 I am suprised this photo came out as they travel along at around 110kph so this came out quite clear and not at all blurry! 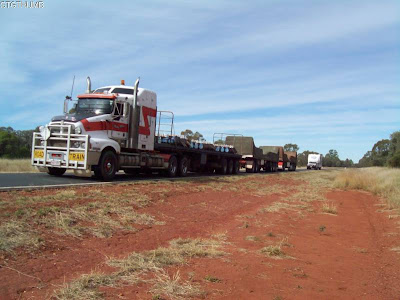 And another! they are longer than 50m as some signs report I would say close to 70m!
At 36km north of Augathella we had our lunch spot at a rest area, not much of a rest area and only has a toilet that was constantly being used! From this point we found that the road was mainly flat (after a small climb out of Augathella) and there wasn't much opportunity for bush camping as the fenceline on both sides of the road was very close to the road but luckily enough just after we crossed over the Nive River there was the old Augathella road and that provided a way to get to a dirt track that led well of the road and into a clearing that is used by others (as there were old campfire places!) so we decided to set up camp there! 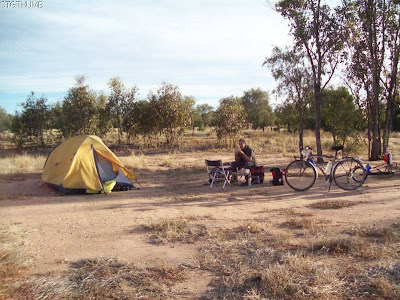 It was a nice spot and we were the only ones there. It was near an old stock route paddock as it had a windmill and when we got there it was spinning and creaking away and I thought once the wind died the creaking would stop - well there was a gentle breeze all last night and it creaked!
We had an early dinner and got to watch the sunset but while waiting for it to set there was no traffic on the road and the 'quiet' was really loud!!! 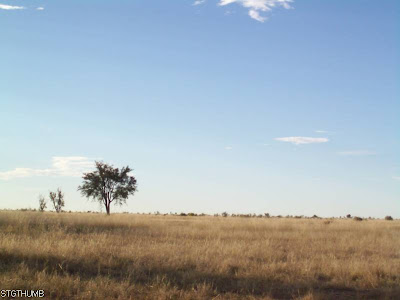 this was our view. Very peaceful isn't it! And below is a photo of Kouta and Neil enjoying the serenity of the early evening before it got too cold! 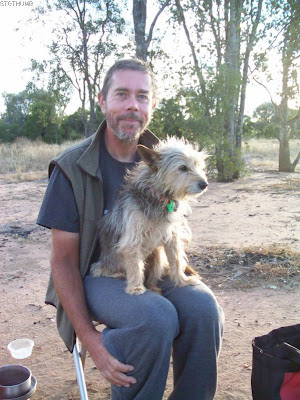 tomorrow is a short day to Tambo.
Posted by Janet O'Brien at 3:48 PM