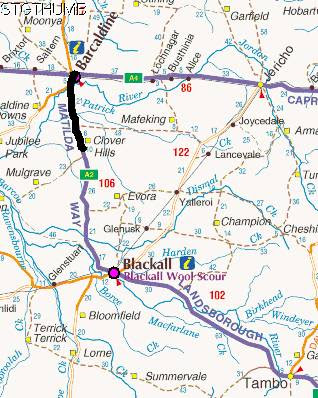 A nice short day today and we had a little sleep in this morning so by the time we got up the sun was over the horizon and it was nice and warm instead of the mandatory freeze while eating brekky! but it was quite a warm night last night. I think Kouta was still tired as when we had brekky he was laying in the sun just waiting for us to be ready!
While cycling along this morning we noticed that the soil has turned back to the red (last night we were camped on black soil) and there was a change in foliage from Gidyea to Eucalyptus scrub ... no I am not an expert ... we passed a sign telling us that!!! 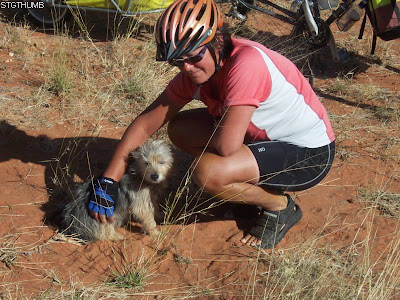 But the soil is a lovely red as you can sort of tell from the photo above which was taken when we took a break this morning. 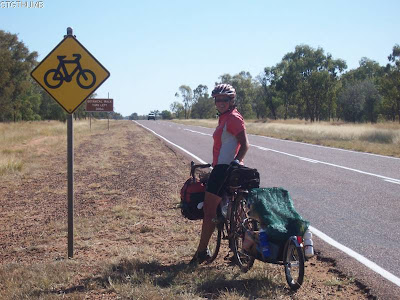 At about 10km from Barcaldine we came across the above bicycle sign ... whenever we come across these bicycle signs we always expect to see locals out riding and training on their bikes ... but we don't so we assume the sign has been put there to warn truckies and caravaners about Neil and I coming along on our bikes!
We got to Barcaldine around 11am and since it is a public holiday everything was closed except for the bakery and pubs. We don't have much food with us just the usual weetbix and dried fruit and nuts, biscuits, fruit cake and 2 packets of cuppa soup ... so we got 2 pies, a sally lun (boston bun) and a loaf of bread. We polished off the 2 pies and ALL the sally lun for lunch and will have the cuppa soup and bread for dinner tonight and we will be at the IGA at 8.05am tomorrow morning! We have nearly run out of Jam and for the past 2 days I have had to monitor Neil when it comes to putting Jam on his bread as he has the "jones" disease of putting at least a huge tablespoon of spread on each piece of bread (a 'snort' instead of a 'sniff' as I put it!) and we end up running out of Jam before we are in a place to get some - so I feel like I am the food monitor sometimes!
Tomorrow we will stay here at Barcaldine but while in town I did come across this sign within the town. 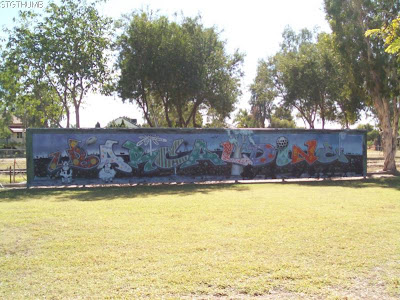 Looking at it I should not have taken it with the sun in the background as you can't really read what it says - anyway it says Barcaldine!
Posted by Janet O'Brien at 2:03 PM