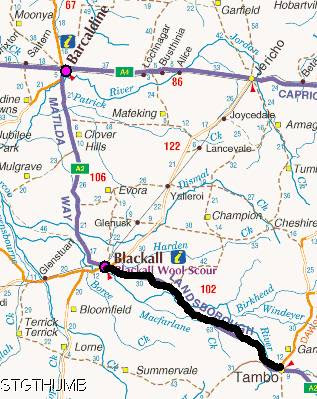 WOO HOOOOOO! yesterday was our first time over the 100km mark and off course our biggest day ... although we didn't plan it that way! In my last post I said that we were going to do a 3 day ride to Barcaldine well it is still a 3 day ride but we unfortunately could not find a place to bush camp last night and our last resort was at the 92km mark at a rest area but that was really close to the road so it wasn't suitable and it was only another 10km to Blackall so we thought we might as well go there for the night and pay for unpowered camping! We had a good tailwind yesterday so the 100km was quite easy to do and this morning the legs are feeling fine. The day started out bitterly cold as everything was in the shade and the toes and fingers didn't want to function properly but once out on the road and in the sun the fingers and toes soon thawed out and the layers were shed. We saw quite a few kangaroos and emus today as there was alot of open plain land and they are easy to spot and we also saw a few Australian bush bustards which are a cross between a goose and a turkey - they are huge (around 100 x 60 with a wingspan of 1.5-2.0meters) and look really cumbersome when they fly as they have to lift a fair bit of weight of the ground to start flying! 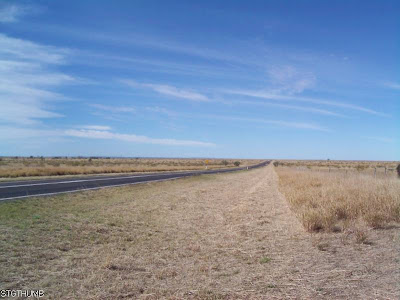 This is a photo taken at around the 80km mark of the road we just cycled. As you can see there are not many trees to hide behind to bush camp! 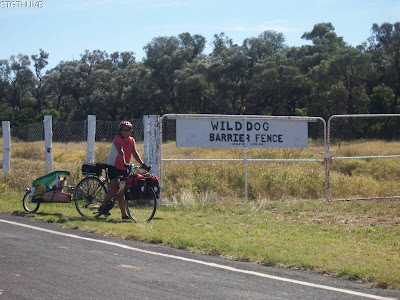 At around 49km we came across a cattle grid running across the highway and a fence running either side and a sign saying this is to keep the wild dogs out - I read somewhere that the fence is not to successful in keeping them out and I am sure it also doubled as a rabbit fence as well. the fence is about 5600km long - a bit like the dingo fence!
Although the road appears flat there is a slight down hill to Blackall as it is 280m above sea level and Tambo was around 400m above sea level so the downhill was gradual.
We have decided that it is a small world out here and when we stopped at the rest area at 92km I looked on the fence and saw this hanging there and thought Ray would like this ... 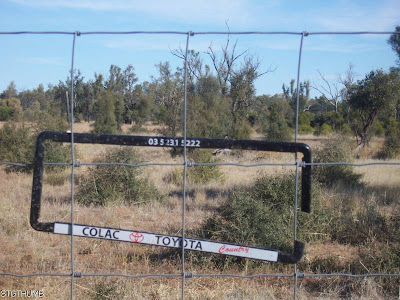 It is a number plate border and it clearly came from a car that was bought at Colac Toyota!!!
We got to the Blackall Caravan Park around 4pm which is quite late for us and it was crowded - no more room for a caravan and power but there was a small section for tents in the unpowered area but they had snuck in a few caravans so we had to keep walking around them if we needed to go anywhere. Basically I think it will be like that from now on at these major towns as there are heaps of tourists everywhere and since the season is only 4months long this is where caravan parks make their income - so basically they charge high rates and give nothing back in return. It cost us $20 to camp with no facilities except toilets and showers and even then they were pretty poor - so they cram everyone in, reap all the money and put minimal money back into the park facilities - there are no sinks (even in the laundry), 4 showers in total in the 2 amenities blocks for women (same for men I assume) and I think the mens only has 4 toilets in total and the women only have 6 for at least 70 men and 70 women - so that is not alot really! There are not many regulations for anything up here in Queensland unlike in NSW and Victoria with regard to caravan parks!
But the park does offer roast beef and vege meals with damper and billy tea for $20 and last night there were at least 25 people at the kitchen eating so that is another little money earner for them! before dinner there is a bush poet singing for around an hour and you give a gold coin donation for that ... or you can sit near your tent and still hear him for free!!!
So this morning we got up and came to the council buildings which are opposite the park and found a few power points and here I am now typing away doing the blog. Before we left we met a retired Tasmanian couple who are travelling around in a 4WD but they are tenting it (our 4th tenter so far on this trip!) and we said that there were power points at the council building and the guy has just turned up now with his lap top! ... we (I really should say Neil) is getting really good at finding power points in public places!
Below is a photo of a local at the council building water feature/pond area and it is about the size of a male hand but it is not a cane toad! ... we are not sure when we will encounter those. 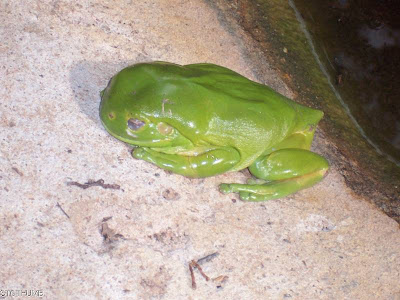 So today we cycle towards Barcaldine (or Barky as it is referred to) which is 107km and we will hopefully find a bush camp somewhere along the way.
Posted by Janet O'Brien at 9:04 AM