I didn't think we would ever get to St George! but we made it by early afternoon and we will stay here tomorrow so Mum and Sharon if you want to skype us just drop us an email or skype message as when the best time is!
Last night the clouds finally moved on and it became cold very quickly and fortunately for us the moon was full so there was alot of light for us. Neil took a photo of the full moon 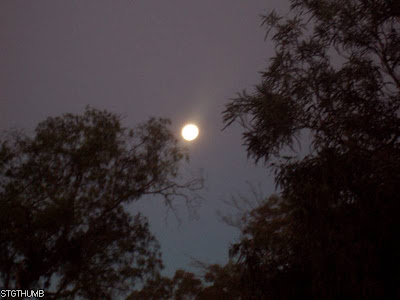 since the days have been very cloudy we were not sure how much light was left in our solar light which is what we read by at night so we were hoping to get a few hours in but unfortunately the light only lasted until about 6.30pm so we got less than an hour out of it! so we had to resort to our torches.
We woke this morning nice and early and again it was really cloudy so we weren't holding out to get the solar light charged today. But one relief for us was there was no wind about. So we left the campspot around 8am which is the earliest we have ever started! We had about a 22km ride west to the turnoff onto Carnarvon highway which would join us up to the Castlereagh highway. I was rather looking forward to going North for once instead of west into the headwind!
While doing the first 22km we crossed over into Balonne shire and to greet us some country bumpkin sicko had strung up at least 5-6 wild dogs on some railing they had erected and soon as I saw it I squealed and couldn't look and told Kouta to close his eyes! Man why would they do that? Neil said the dogs are probably feral and they have been killed to prevent them from attacking farm animals and he also said they were very big dogs!
At the turnoff at Nindigully we quickly see evidence of the recent floods in St George ... now we were currently 45km south of St George and this is what the flood waters had done to the road 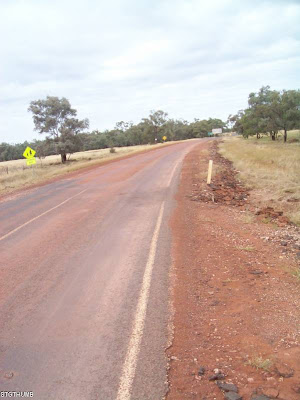 it is not quite clear but the other side of the road and part of the lane we were in has NO bitumen on it and you drive/ride on the red clay and then on our side of the road is the actual missing bits of road! 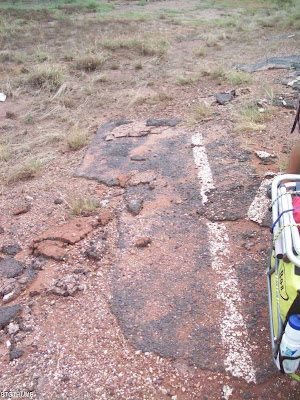 so that white line is not from our side of the road it is from the missing bitumen and is alongside the highway on our side!
By now it is around 9.30am and ... listen to this ... the wind picks up which is fine as I thought it would be like the previous days coming from the south west and so since we were now going north it would be a tail wind ... well listen to this ... it is a north easterly!!! I couldn't believe it it was a damn head wind ... again!!! The first thing I said to neil was that once we get to St George I am not leaving the town to go north to Roma until that wind is a southerly! and for the next 40km I am just grumpy and dwelling on the wind like it is my number one enemy! ... I have resided to the fact that I am a headwind magnet!!!
Now riding along we come across something alongside the road and it is a piece of steak on legs! now I thought it was just some small cow waundering around lost and as we get closer (as it is on our side of the road) the damn piece of steak on legs is a very expensive steak on legs ... it is a bull! now all I can think about is that my front pannier bags are red and I am thinking why the hell did I have to choose red pannier bags? now is this bull thinking he is in spain at the 'running of the bulls' ? I am seriously freaking out and Neil is now on the other side of the road and so I join him and the bull just turns and watches us!!! I dare not look at him and tell Kouta to close his eyes ... again! and all I can see is the farmer up ahead driving back down to round the bull up ... I am assuming because he might be worth a few dollars alive and nothing dead!
Crikey I am over wild life! speaking of wildlife we saw heaps today - even a field of kangaroos that popped their heads up to watch us while we turned our heads to watch them!
So as we get closer to St George we are now seeing HUGE fields of cotton ... well the remains of cotton shrubs as the season is over and they are tilling (I think that is what they call it) the land in preparation of next season. Anyhow these fields are just gianormous and have channels alonside the road and huge damns. By now I was beginning to get really tired and hated the fact that due to these farmers having such big cotton fields I was exposed to the headwinds because these fascist farmers cut down every single tree that would normally line the highway and provide a buffer for me from the headwinds just so they could have longer rows of cotton which suck the living daylights out of the ecosystem up here with their countless rounds of pesticides to stunt the growth of the cotton shrub ... now that is off my chest! yes it was a tiring day and the cotton farmers bore the grunt of my bad mood!
I was relieved to get to St George and we couldn't quite decide which caravan park to stay at (we were recommended one but that was 2.5km out of town) and Neil was hesitant to choose one since he choose the one at Goondiwindi and we all know that the caravan park owner there was a freaky, weirdo capitalist pig that treated his tourist guests like his permanent tennants that lived there! well in the end we stuck with the one that was the cheapest and we have to say that it was a good choice - the owners are nice and the park is good - showers are a bit strange but okay! We even got a $2 reduction on a powered tent site since our tent is small compared to caravans!
We went for a walk into town to get some food and walked back along the river and below are some photos that I took. 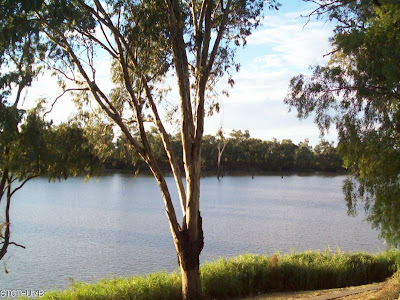 this is the Balonne river and this is the river that was responsible for flooding the town of St George back in March this year. It is a pretty river and this is part of the weir.
But as we walked along the path I looked up and I questioned Neil about does Barnaby Joyce live here ... and believe it or not his office is at St George but Neil is not sure if the senator lives here ... now for people that know me ... Barnaby Joyce to me is on par with Shane Warne I can't stand the idiot ... I am proud to not be a citizen that has to vote! 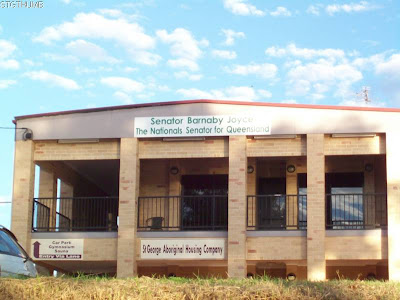 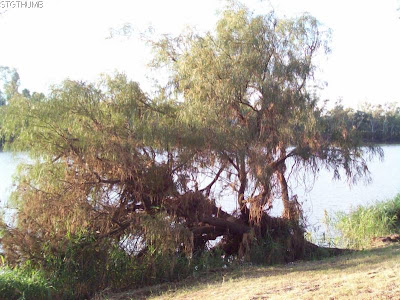 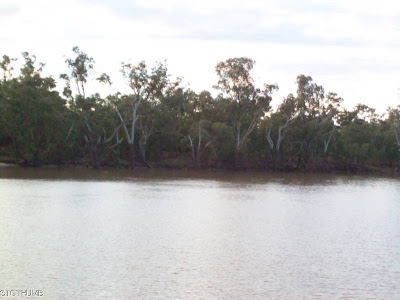 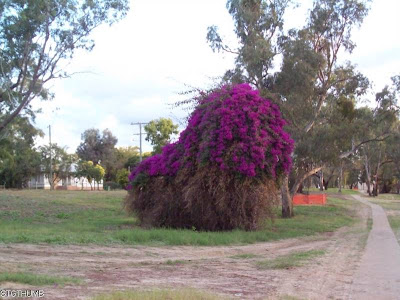 the water must have stayed up for a while to kill of the leaves and flowers of this plant!
Well that is all I have of St George for now so tomorrow we will endeavour to listen to the game between Geelong and Melbourne on the internet and hopefully chat to Mum and Sharon.
Posted by Janet O'Brien at 6:39 PM