It was only a short day today - we woke and I felt very tired this morning because last night we didn't get to sleep until around 10.30pm due to all the noise and hype from the game!
We got to Longreach really early - around 10am and we were undecided as to which caravan park to go to - looking at the internet both didn't really have great reviews and although everyone has different opinions of caravan parks the reviews can be quite helpful sometimes. The first one (Discovery CP) is very big and an ex Top Tourist park and has been described as a dustbowl - we had a look but the unpowered section was grassed and didn't look too bad. We had time so we went to the other side of town to look at the other one (Longreach CP) and it was described as small and cramped - as soon as I saw it I said 'no' as it looked like nowhere for tents and I had visions of the Goondiwindi one where the guy was freaky and the tent section was on their front lawn. So we came back to the Discovery one and believe it or not it costs us $27 pernight for unpowered and that is with a Top Tourist discount (despite not being part of the Top Tourist group I think they still give their discount!). I was shocked at first but once we set up tent and saw that there is a communal power point near the shaded table area, a camp kitchen and free BBQ, good toilet, showers and laundry and most importantly there was a big tent area (normally used for coach tours) and only 1 other tenter ... I really started to like the place. It was the fact that we had our own big area away from the caravaners and people. Sometimes we like to be by ourselves (hence why we favour bush camping) and get sick off the same ole questions and saying the same ole thing! In a caravan park we cannot get away from that and sometimes we just want to be left alone - off course people are not aware of that and we don't expect them to be aware of it so it is a relief that when we are in a caravan park and it is huge that we actually do have our own section being hardly any tenters! So we may even take a long break here despite the cost but I think it is worth the money because it contains all the facilities that we need - even power for the computer! this is our ideal campground so really our review of it will be different to everyone elses. The caravans are on very dusty sites (and that is the main complaint) there are no slabs or grassed areas for them and when they drive around the dust is kicking up and blows everywhere ... but in the unpowered section! 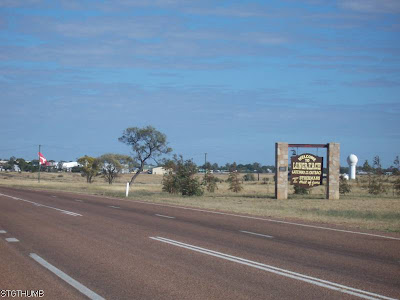 Again it was a warm day and a strong wind which is beginning to come from the north. Longreach is a big town and there is alot to see if you are willing to pay! It has the Stockman hall of Fame, Qantas museum, Thomson river cruises and fishing etc. But they all quite expensive and a bit beyond the budget and some reports say they are a waste of money (with the exception of the Stockmans hall of Fame). Neil says to me that I can go despite the cost but I said the one thing I would like to see is the Banjo Patterson Waltzing Matilda museum up in Winton so I might go to that when we pass through.
Tonight we had our first good meal for quite a while (I suppose the hamburgers at Tambo and Barcaldine are okay!) we had Tandoori chicken and rice - the Tandoori came from a jar! it was lovely and tomorrow we will have chicken and rice again as the chicken only came in packs of 2!
At the moment it is 6.15pm and I am getting bitten alive by mossies - I was a bit too late in putting the deet on!
Tomorrow we will go to the post office to see if the wheel has turned up and if it has we will decide if we will stay here over the weekend. I am in 2 minds - I would like to stay if the wheel turns up but I would also like to go if it turns up as there are 3 days of south east winds which means tailwinds all the way to Winton!
Posted by Janet O'Brien at 5:57 PM