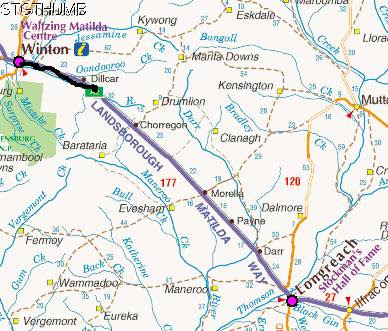 Only a short day today to Winton and again we rejoined our continuous straight road with a very barron landscape - for some strange reason although it is really barron and repetitive I don't seem to get sick of it ... and I suppose we are going so slow that really it is not that repititve ... one tuft of grass is different to the one 100m further on!!! Now I am beginning to fear as we begin to get closer to the coast (1000km away) that I won't enjoy the cycling along the coast - I remember when I cycled from Darwin to Adelaide that from Port Augusta down through the Clare Valley and towards Adelaide I didn't really like the scenery and that I was pining to be in the outback! But the bonus is that once we hit the coast there will be alot more Woolworth supermarkets and I think I get more enjoyment from seeing and waundering through a Woolworths supermarket than seeing and waundering through any tourist attraction!!!
Along the way this morning we could see a slight mountain range and we assumed it was part of the Bladensburg national park. Looking at the range it was a nice change from the flat landscape. 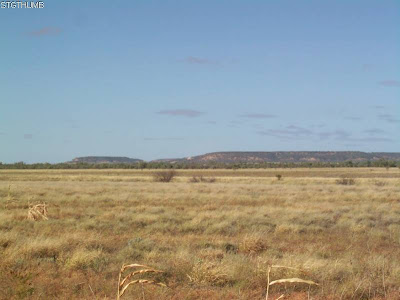 Our ride to Winton was not exactly on the straight road there were a few bends along the way! We did come across a herd of Camels and we stopped to take photos of them. 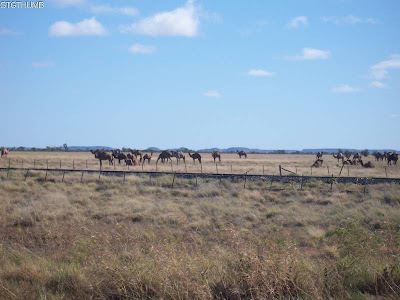 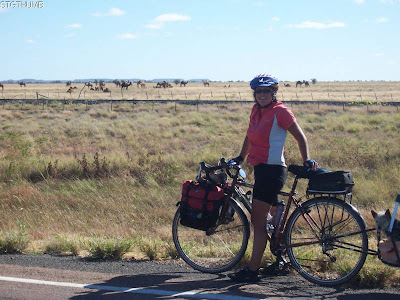 Coming into Winton you get your usual 5km stretch of what I like to call 'junk mail' which are a series of billboard advertising for tourist accomodation, attractions and services. Winton promotes Banjo Patterson and Waltzing Matilda, Dinosaurs and the home of the meetings where Qantas was started. While at Longreach I read the comments and reviews about the caravan parks in Winton and they weren't very promising (then again for some strange reason nearly all caravan parks out here in the outback have negative reviews so I am wondering just what people expect out here!!!) so I wasn't really looking forward to being in Winton ... but I was proven wrong - it is a really charming little town, full of character and charm - alot better than Longreach!
The campground was nearly empty when we got here around midday but by the evening it was chockers! It is a dusty campground but which outback campground isn't so you sort of get use to dust and dirt getting into everything. Like alot of outback campgrounds they offer a roast beef and vege meal for $15, an outback slim dusty type singer and bush poetry - but the bush poetry is a little different to the ones advertised in other town campgrounds - it is 2 women Susie and Melanie. So since our camp spot is right next door to the area where they do all the entertainment we decided to go along and watch the bush poetry. Not really knowing what to expect as we hadn't really seen the ones at Blackall, Barcaldine and Longreach we had really only heard them and it was the same ole thing - harping back to the ole ways type thing so we thought the 2 women might have different perspective. Earlier on we met them as we booked in as they couldn't believe that we were cycling and had a dog!
Anyway we stood at the back while everyone sat down at tables and chairs and one begins by welcoming everyone and picking on certain places that people come from and generally everyone had a good laugh (not only do they promote the show as bush poetry but also comedy yarns and stories) and then next thing you know she is beginning to mention that 2 special people are here and standing up at the back (and I look and see it is only Neil and I standing!) and tells them all how we are cycling and we have a dog and then she is telling everyone to give us a clap etc - I am just going bright red and Neil and I are just gobsmacked and don't know what to do but just stand there! Then she begins her poetry and it is great and then the other one does hers and that is really good to - they were really entertaining and it was a combo of bush poetry and comedy. There was a fair bit of Banjo Patterson and they did a Banjo Patterson poem with children where they act and quote the poem about the christening of McGuiness (I can't remember the name of the poem). One of the last poems is 'the man from Ironbark' and they got 2 men in to act that out as they quoted the poem and that was absolutley hilarious! At the end they ask for a donation as this is there livelihood and I tell you alot of people put money in the hat as it is well worth it because it was such a great show - and yes as much as we are on a budget we did blow it completely and donated just as much as everyone else (most put in $5) and I tell you you couldn't get a more entertaining show in the city! Tonight they are on again and every night they change their routine - I suppose to suit the crowd.
Posted by Janet O'Brien at 12:41 PM