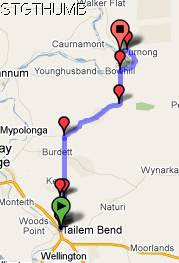 Tailem bend to Purnong = 60km
Cummulative total = 847km
I slept okay last night until the trucks began around 4am. We left ust after 8am and went into town to pick up a few bits and pieces. We took a very quiet road and we thought that it was unsealed for a few kms but lucky for us they had recently sealed it. This road was up and down for about 25km, some of the hills were okay and some were just eshausting! they weren't overly steep but just ongoing and long. Fortunately for us there was no wind at all and only a slight breeze later in the afternoon coming from the north east. 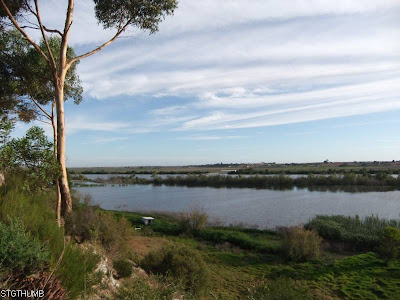 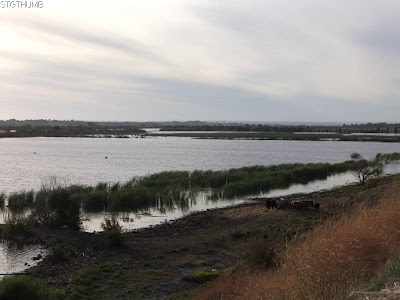 photos of the murray taken from the caravan park at Tailem bend.
We did take a break alongside the road and realised that it was a military firing area! It wasn't until we started to read all the signs that we realised what it was. Even the red flag was firing which means that firing is occuring but we didn't see any SAS or hear anything. 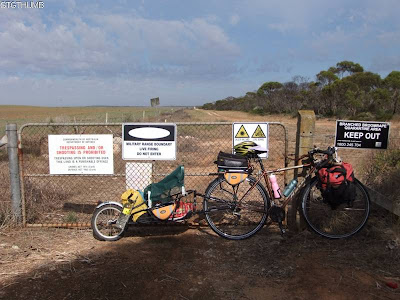 After 25km the road did flatten out a bit but it was still very tiring - it is a hot day and there is no shade as you cycle (lucky for the sun visors). 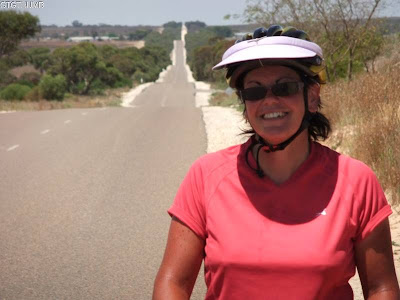 this is typical of the landscape and road the hills are generally a series of small gradual ones on top of each other. You do go down whatever you come up but it doesn't take anywhere near as long as coming up them!
We did find a communications tower and stopped there for lunch in the shade. Both of us were covered in sweat and were looking forward to swim in the river.
The road veers north and again up a long hill and down into Bowhill. Took another break and had to pour water over Kouta to cool him down a bit.
From Bowhill it is another 10km to Purnong and there is a climb out of Bowhill and just around Chucka corner the wind picked up and there was a slight tail wind - aren't we lucky! 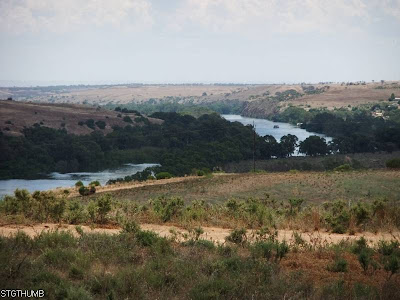 Here is a view of the river and you can see the ferry crossing at Purnong.
Got to the ferry and saw that the rest area was on the other side (western side) so we crossed over and there was only one other van. Neil went over and chatted to the man and he informed us that they were just saying on the radio that people shouldn't swim in the river due to high amounts of sewage and a high e coli count due to the recent flooding of Mildura - I think they had a few problems with their sewage system when they got flooded out a bit! So there was no cool refreshing swim in the Murray.
About an hour after setting up the skies just opened up and it poured down and there was thunder and lightening and very strong wind. The storm just raged and poor Neil had to get out while it was raging as all the pegs from the fly came out and he had to batten them down (they were all the pegs that I put in!) Unfortunately he was too wet to come back in the tent so it wasn't cold so he just stood there in the rain and thunder and lightening keeping an eye on things and having a sort of shower! - meanwhile Kouta was fast asleep in the tent and I was sitting in the annexe holding the annexe pole in an arc. Fortunately the door of the annexe was facing into the wind (like it should do) but every now and then the gust would come from sort of the side and front so I was petrified that the wind would blow and cause the poles to bend in an abnormal way (instead of maintaining its' arc shape) and snap. When the wind did die down Neil went and dried and changed himself in the toilets. Unfortunately the wind picked up again so I had to go back into the annexe to hold the pole again. By this time Neil was back in the tent and after around 30mins the rain, wind, thunder and lightening eased so we were able to go and and access the situation. 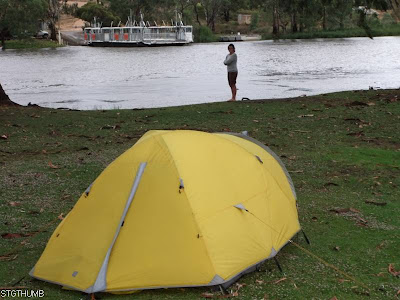 after the storm the temperature dropped about 10 degrees which was good as it was around 30 degrees when we got there. 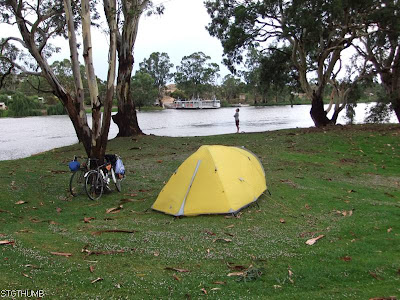 as you can see the tent held up remarkably well and nothing got wet (except Neil) or broke. We listened to the radio and heard that Swan Reach (which was just up the road) had a little flooding and they said that it was going towards Murray Bridge and then Adelaide.
they also said that the winds got to around 80km per hour (which is damn strong!) and around 69mm fell in Swan Reach.
The toilets have water but it is not drinkable but sort of okay to wash - a bit brown but enough to get the salt off me. Otherwise I went to bed last night feeling very gunky!!!
Posted by Janet O'Brien at 3:23 PM