Heywood to Bushcamp 15km before Nelson 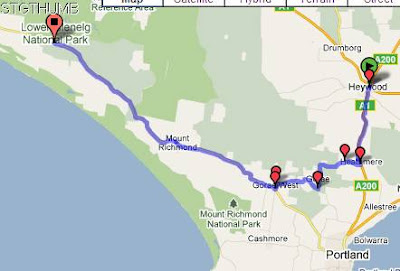 Heywood to Bushcamp 15km before Nelson = 63km
Cummulative total = 325km
We could not get either optus or telstra internet way out here in the bush today so I have copied and pasted the days blog from my files.
We had a good nights sleep last night and slept in a little bit. We left around 8.45am and headed south towards Portland. We initially were going to go across to Dartmoor via highway 1 but there seemed to be a lot of trucks heading in the same direction to Mt Gambier so we decided to go south a bit and cut across to Gorae and onto the road that goes from Portland to Nelson.
So went on highway 1 for around 9km - it was busy but it had a good shoulder so we didn’t get in the way of trucks. Just after the Surry river we turned west onto the Surry River - Gorae road and this was a lovely quiet road a bit hilly but ridable. This road joins up with the Portland-Nelson road at Gorae west but just before we joined this road we go one hell of a fright we saw a Koala on the side of the road and I think it also got a fright from us and I don’t think he was aware of us until we actual said OMG there is a Koala and soon as it heard us Neil said it lept onto the blackberry bushes and then started scrambling up a tree at that point Neil was off the bike and coming to me for the camera. The Koala by now had stopped about 2 meters up the tree and was watching Neil who was about 4m from the Koala taking photos. 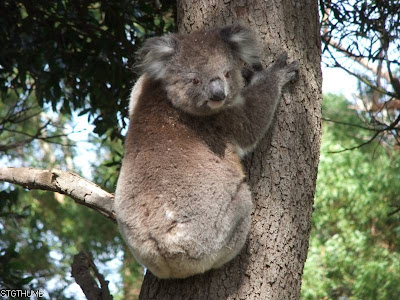 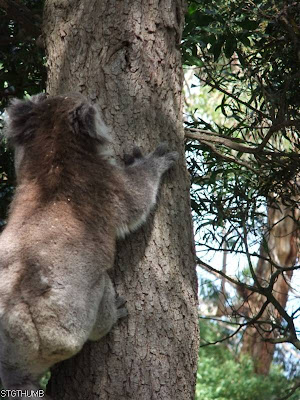 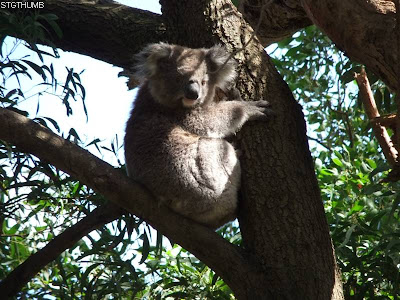 I couldn’t believe it and it was very weary of us and kept watching us. Eventually it climbed a little more and sat in the crook between 2 branches safe in the knowledge that we weren’t after him.
We looked around for others but couldn’t see any and Neil said he didn’t see it cross the road as we were coming so it must have walked along the side of the road where the blackberry bushes were. We don’t think it was grazing on the blackberries as apparently they only eat one type of Eucalyptus leaf, but I wouldn’t be surprised if it was eating them!. We were both very excited about seeing this Koala because believe it or not it is, for both of us, our very first real wild Koala! Although we have seen them at Raymond Island (near Paynesville) and in the campground at Beechworth but to us they are tourist or conservation areas where everybody knows there are Koalas so they are wild but not wild in the sense that the Koala that we saw today was probably not going to be seen by anyone else and it is not in an area that is a conservation area or wildlife park - know what I mean. We see along the road the road signs saying Koalas in the area and we look but never see any and now today without warning here is one along the side of the road! Gosh we were both very excited about it and I made sure Neil got good photos of it!
Anyway we rode off on a high and joined the Portland - Nelson road. It is rolling up, down, up to Mt Richmond. We stopped of at Gorae west to pick up water as there is no where along this road for water. We found a tap near one of the small buildings near the CFA building - we won’t use it for drinking as we are carrying plenty but more for washing. We stopped at Mt Richmond were we had a cuppa at the 40km mark. From here it is down hill a bit and you come close to the coast and there is a great view of the coast as you go down the second hill. 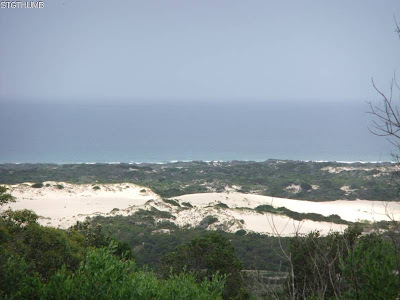 From Mt Richmond on there are heaps of pine forests and plenty of areas to bush camp. The road is still undulating and the traffic is not too bad - a few trucks but when you here them come there is a shoulder which you can seek refuge in and then once they pass you can come back out on the road as the shoulder is very rough and the road is more pleasant to ride on.
The rest area is about 15km before Nelson and the blue sign saying it is 300m ahead is a bit wrong with regard to water - there are water tanks but the sign clearly says they are for fire fighting purposes and I doubt you would be able to find a small tap coming from the tanks! I also doubt the drinking quality of the water. Otherwise it is an okay rest area but there are pine forests opposite it so it is better to camp in there.
We have been along here before (a year ago!) and we decided to camp in the same spot (well almost) in the pine forests. It is nice and cool in here but unfortunately a few mossies that love to bite through clothing especially lycra!
At the moment we are all crowded in the tent resting and soon we will have dinner - guess what it is .... WEETBIX!!! yippeeeeeeeeeeeeeee!
Onto Port MacDonnell tomorrow. 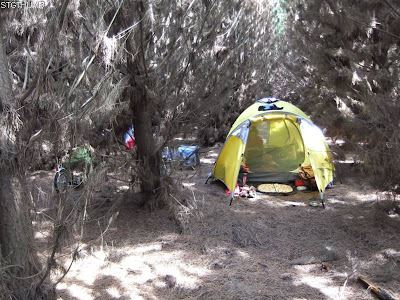 A photo of our campsite in amongst the pine trees.
Posted by Janet O'Brien at 3:15 PM