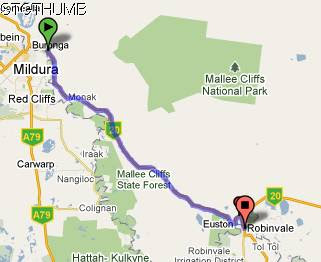 Gol Gol to Robinvale = 79km
Cummulative total = 1299km
Crikey it is warm! We had a nice rest day yesterday and we had plenty of shade and it didn't really get hot until late afternoon. We decided to try and get up early and get an early start before it got too hot for kouta. In saying that we don't have the alarm clock and I was petrified that we would sleep in so I don't think I slept at all last night in the fear that I wouldn't wake up early! I must have dozed off as Neil woke me up at around 5.30am so we got up and it was still dark and had to have breaky in the tent with the light on!
We managed to get away by 7.40am which was good and it was nice and cool - around 17 degrees I think.
We cycled on the Sturt highway and there wasn't too many trucks - some but I think alot would have turned off and onto the Calder highway. There is a shoulder for most of it and when the traffic wasn't heavy we rode on the road as it was smoother.
Hardly any wind and when it did blow I would say it was coming from slightly behind us so that was good.
There are regular rest areas along this road about every 15km or so. After our first stop we passed a guy walking along side the road carrying a big back pack and bags hanging of it. He was going in the same direction as us but ambling along on the other side of the road. Neil went over and asked if he had enough water as we had plenty and had a spare bottle to give if he wanted it but he declined.
Neil came back to me and said that he is almost certain that the guy is from the 'Australian Story' episode about a guy just up and leaving his job and family and no one had heard from him and they all thought that he was murdered or dead, even the police couldn't trace him. Anyway Neil can't remember exactly the story but the guy was reunited with his family after 20 odd years or so after some TV reporter/producer passed him and just asked if he was such and such and the guy walking said yes and so the story of reuniting him with the family began. I didn't see the episode as I find it too sad and end up crying too much so I avoid those sorts of programs! He just wanders around doing fruit picking etc and walking from place to place - so I am sure he would have walked this leg before and knows the rest areas and which one has water which is the rest area 40km before Mildura going north and even then it is not potable but okay for drinking - I am sure the guy walking has a cast iron stomach with water and is able to tolerate non potable water!
We were making good timing and had done at least 60km before 12 o'clock. It is a cloudy morning but still warm and around lunchtime the clouds lifted a bit so you could feel the temperature rising. About 15km before Robinvale the road narrows a bit and you loose your shoulder and the road is a little bumpy.
We get to the bridge just before Robinvale that crosses the murray just on 1.30pm so that was good timing! 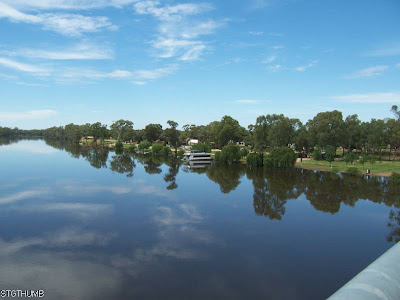 this is the view from the bridge and you can see the caravan park - nice isn't it and not too many people. 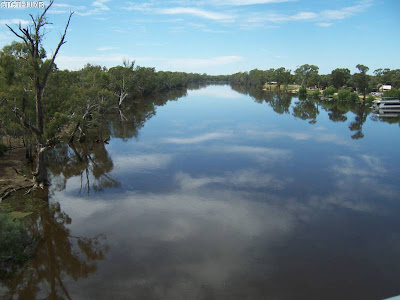 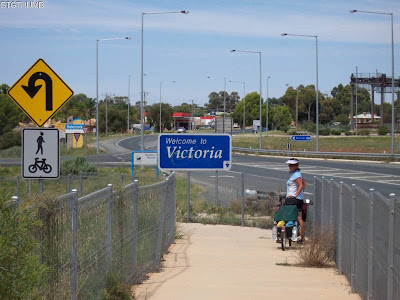 off course now we have crossed the murray again we are back in Victoria and around the corner is the caravan park.
It is a nice park, has river front sites with no shade so we are in the middle section under some trees - the best site with the most shade! we do have a view of the river if no caravan parks in front of us! 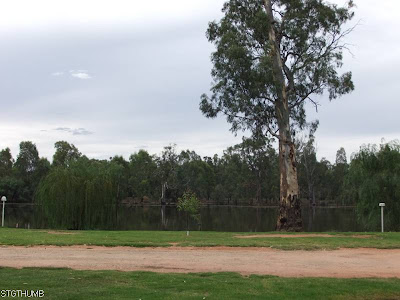 our view from the front door!
The caravan parks are a little empty as people are not coming along the murray because of the flooding - a guy told Neil back in Gol Gol the Top Tourist park in Swan Hill had to lay off 7 of its' workers as they weren't getting in the caravaners like they normally do - even though it is perfectly fine in the caravan parks.
All the parks we have stayed in that are along the murray (which is most of them!) are all okay - the river is closer to some of the sites as you can see tree trunks submerged in water when normally they aren't but the sites are perfectly okay.
The river is flowing very nicely here - very gentle compared to when you look at it in Renmark I suppose it has something to do with the locks and weirs.
We might stay here over the weekend as I am reluctant to travel on the weekend after last weekend between Morgan and Renmark as every man and his speed boat was out and about so i assume it would be similar around here. Besides we have to go on the Murray valley highway (I think that is what it is called) now and last time we were on this it was hard as there is no shoulder so I presume it is the same here so I would rather do this part down to Swan Hill without weekend traffic!
Posted by Janet O'Brien at 3:57 PM