Morgan to Kingston On the Murray

Morgan to Kingston on the Murray = 73km
Cummulative total = 1028km
We did absolutely nothing on our rest day yesterday because we couldn't do anything! It rained a very light rain for most of the day so we all had 'tent fever' by the time it was time to go to sleep.
We knew the rain was coming so we went on a quick tour of the town the evening before. We mainly went to look at the Morgan Wharf - or the the remains of it and the old train station. 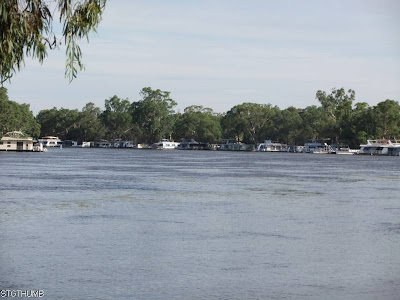 but first we had a look at some of the house boats tied up at the Marina - so much money there! 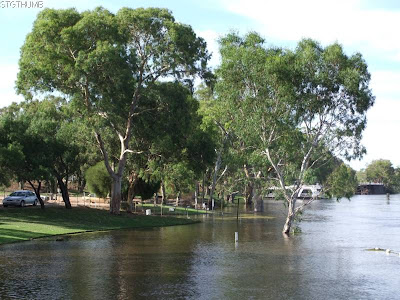 there was a public area just outside the park and I think before the flooding it was the swimming area - as you can see there are a few trees under the water that normally wouldn't be! 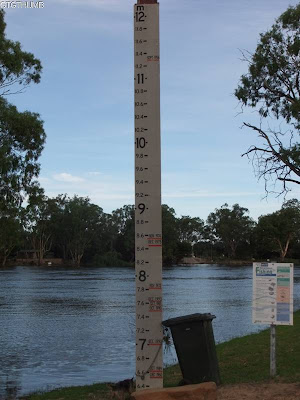 this is the flooding marker - so far this years probably won't make it - it is currently around the 6m mark but if you look at the very top mark which is around the 11.3m mark and that was back in 1956! imagine I would have been under water to take a photo of that back then! 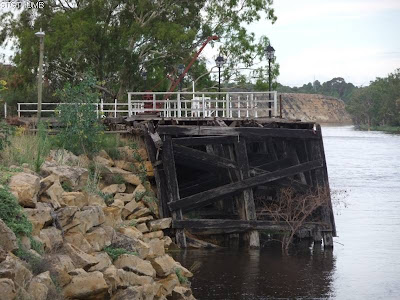 this is the remains of the old wharf - i think back in its hey dey this place was quite busy - not like it is now. 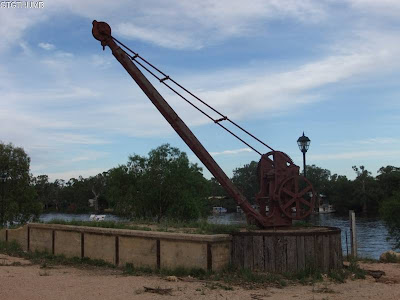 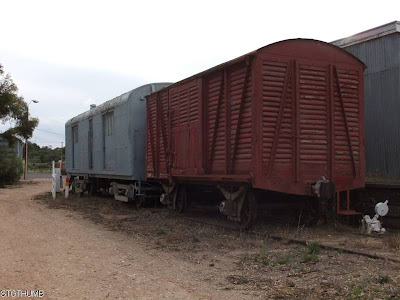 bits and pieces of the old railway station 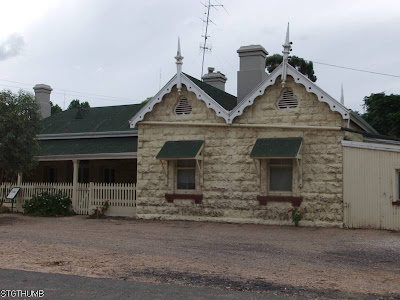 the station masters house - and we think someone still lives in it so it is now a private house. 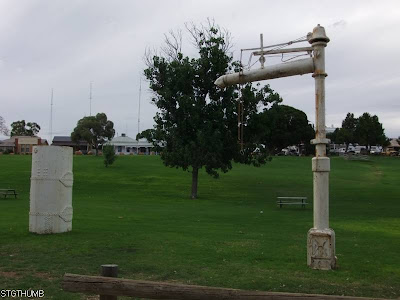 something that fills the steam trains 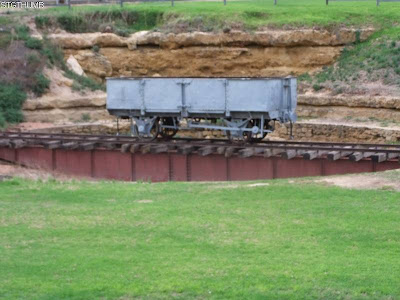 the turntable to turn the engine around 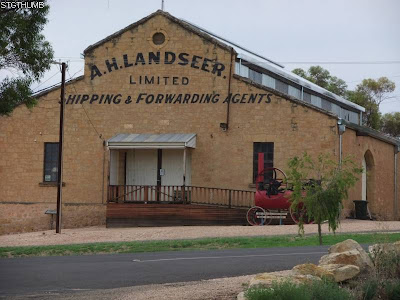 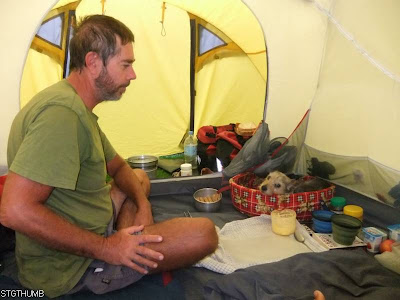 since it was drizzling for most of the day we had breakfast in the tent! 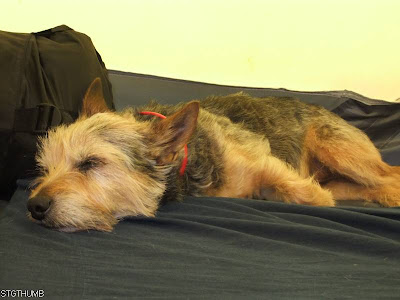 kouta making the most of his day off! ... what am I talking about he does this all the time he is not in the trailer!
So we may have had a good days rest but unfortunately by friday evening the park was beginning to fill up ... with dickheads mainly!
Quite a few of the permanent holiday caravaners turned up (mostly young groups), the odd tourist, and quite a few young groups of people just here for the weekend with booze, boats and babes!
So getting to sleep was almost impossible, staying asleep was impossible and wanting to go out and slash all their car tyres was a thought that I nearly acted on!!! I tell you some people do not consider anyone except themselves - really at 2am in the morning continuing on like a pack of drunken wallies is just ignorant - man I sound old! We must have woke up at least 3 times to groups walking pass talking loudly, throwing their bottles in the recycle bins etc. I was over this place by the morning and I tell you I had the radio on ABC blaring while we ate breakfast and for some strange reason I was heavy handed while eating my breakfast out of my tin plate - gee I wonder why!!!
Anyway we left around 8.30am feeling okay (it is now 5.30pm and I am ready to go to sleep!) and took the road via Cadell to Waikerei. This road is very winding and undulating and most of it is continuous farms of either grapes or oranges with the odd olive tree here and there. Unlike the roads to Morgan where the farms were really sporadic - the farms along this Cadell Valley road were one after the other.
We even managed to get a photo of a bunch of grapes as they were close to the road and they didn't have fences. 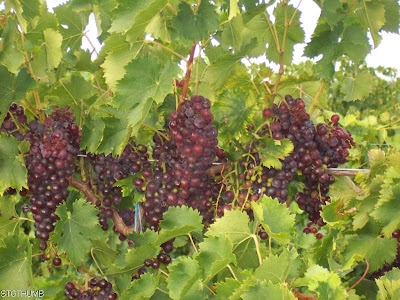 not sure what type of grapes these are but they were sweet - Neil took 2 individual grapes - apparently they are picking the vintage grapes at the moment. But most of the vines we passed still had fruit on them. As you get closer to Waikerie the vineyards get bigger and the rows get longer! they went for miles and miles and as far as you could see in the distance.
We did see a rather unusual tree bearing some really unusual fruit on it ... 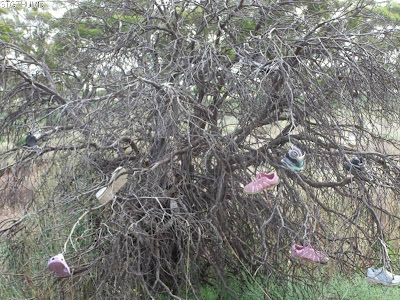 here is a close up of the fruit! 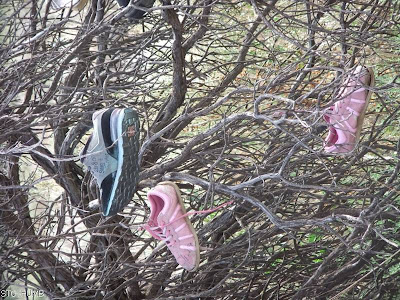 we didn't have any extra shoes to donate to it!
At Waikerei we picked up some food as there is a Woolies there - our last one was at Millicent. We went to the lookout that is behind the woolies and could get a very good view of the surrounding area 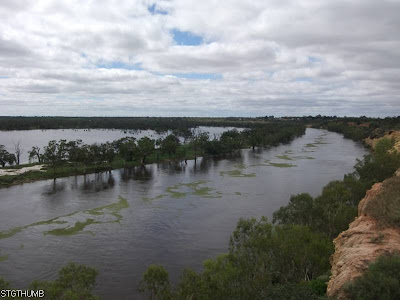 the murray river is the water on the right and the water on the top left is the flooding.
From Waikerei we had to joint the Sturt highway - lucky it is a Saturday and there wasn't many trucks but the local traffic was thick and fast. it had a shoulder the whole way but it was rough and bumpy as it hasn't had the constant traffic like the road has to smooth it out. Fortunately we had a westerly wind today - normally our winds from now on should be in front of us and giving us a headwind but today we had a tail/cross wind so that made the going easy. Hopefully tomorrow being a Sunday there won't be much traffic for the first half of the morning. We are staying in Paringa (remember the ABC show 'Rain shadow' about the vet etc well I loved that show and have always wanted to go there - I didn't realise 2 things - that it is only 5km from Renmark and it has a population of around 1600 - I got the impression (I don't know why) that it was a tiny town in the middle of no where - how wrong was I!!! The only campground in Renmark to take dogs is a top tourist and they are very militant with the rules associated with having a dog that I actually wonder why they allow dogs - you cannot walk the dog in the park - this is to avoid the dog peeing over bins and taking a dump but most people will pick it up in the parks we have been in so that sort of environment of fearing your dog is going to pee or dump before you can get to the park gates is not nice so that is why we are going to Paringa!
Posted by Janet O'Brien at 5:31 PM