Cullulleraine to Mildrua/Gol Gol = 64km
Cummulative total = 1220km
I was a bit slack yesterday and didn't post this blog as I was a bit tired and worn out. Yesterday was easier than what I thought it would be - fortunately the wind wasn't as strong as the day before but it was tough going.
We did manage to get up as the sun was rising and I took these photos of our camp spot. 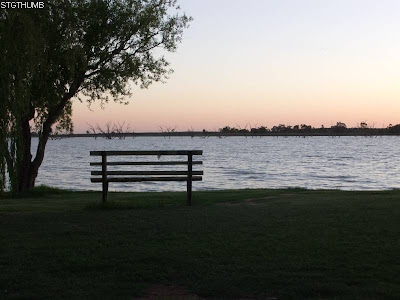 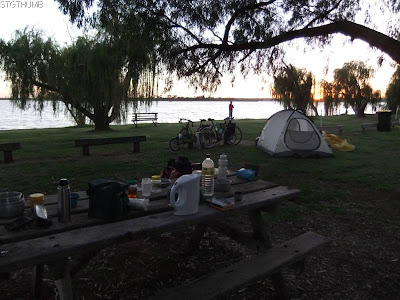 we had a nice spot overlooking the lake.
We got away just on 8am and we continued along the sturt highway. We still had a reasonable shoulder although parts of the highway were a bit rough but compared to other highways we have been on this Sturt highway isn't bad.
Just outside Mildura around 20km before it you start getting into the vineyards again. As you come into the outskirts around 10km you start to see smaller vineyards and a little bit of water lying around from the recent floods - not too bad or as bad as what I thought it would be. Part of the highway is controlled by a light system and only allows traffic in one direction where the flooding was as there is still a little bit alongside the road. 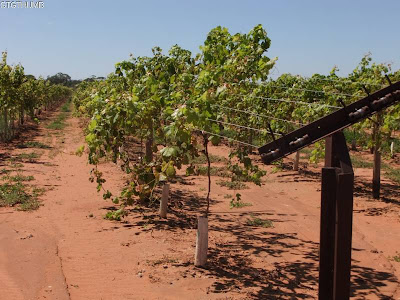 a different way of growing the grapes - instead of the traditional top and bottom wiring going across.
Neil saw this set of racks set up to dry the grapes out - I assume for raisins/sultanas 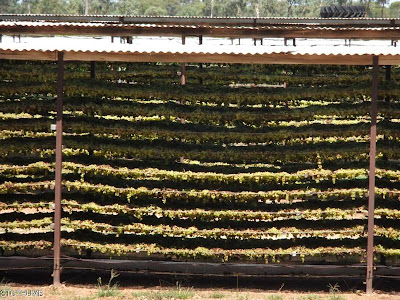 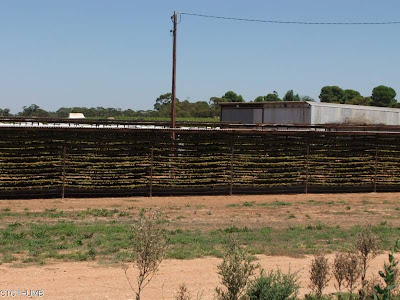 looking at this way of drying I wonder if it goes straight from these racks into the sultana packets?!!!
There is still a little evidence of the flooding 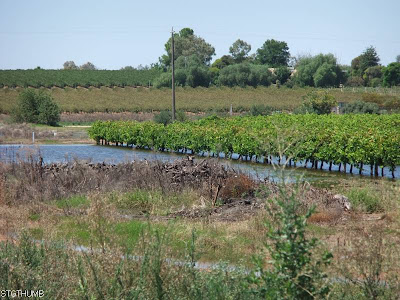 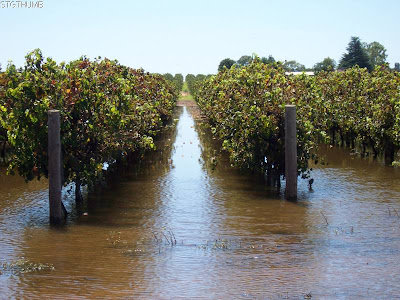 these vines have probably been sitting in this water for weeks! I don't think they like that much water!
We got to the campground mid afternoon after stopping by woolies to get supplies. We did past Stefano's cafe along the way but didn't see him ... I love Stefano! After watching some of his cooking shows I had always wanted to come to Mildura to see what it is like - off course it is nothing like what he portrays on his shows but I have to admit the 'colours' from the show of red dirt, green vines and blue skies sure is common around here!
Mildura is a nice enough town - big but nice.
We did see the PS Melbourne paddle boat leave the Mildura Port 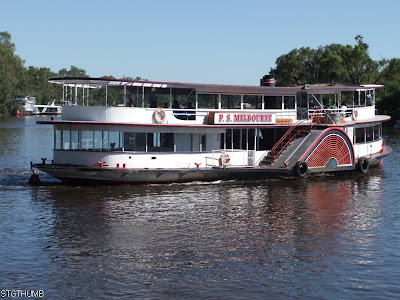 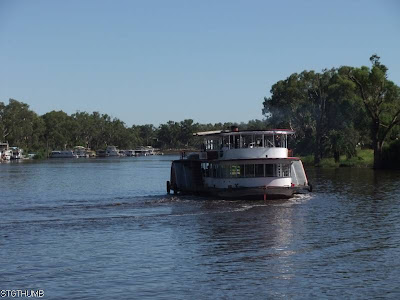 riding along the river here on a sort of bike path Neil is a little disappointed with Mildura - it has been 40 years since he was last here - so of course things change and usually they change for the worse - near the bridge there is a new housing development which is most definitely going to be awful to look at alongside the murray. Just up from the campground here at Gol Gol there are huge massive wealthy houses that all front the Murray so there is no public access even between the houses so that is a negative.
Although I am not a huge fan of Echuca (simply because the campgrounds don't take dogs) but I think it is a better set out town than here in Mildura. Echuca certainly makes the most of the murray river and public access alongside the port and wharf and all the way along it - Mildura unfortunately doesn't take advantage of it and it is very disjointed - alongside the river is parkland with now picnic area, private houseboat awnings where they haven't kept the grass mown and it is all ugly and over grown. Mildura has a park, play area and picnic across the road from the Murray but it would be served better if they put the road behind the playground rather than have to cross the road to get to it! silly town planning really. In the town itself it is crowded and they have a roundabout with pedestrian crossings all around it so you could be halfway through the roundabout and have to stop for a pedestrian - I don't know how many near accidents I saw while waiting there all because someone is not concentrating on what is behind, in front and on the sides of them! I think a set of traffic lights with pedestrian access would be better served here rather than a roundabout.
So I don't think we will move here. I don't think there has been a shortage of water in this town as there is an abundance of green lawns and despite the excessive rains this town may have had over the past few months - grass doesn't grow that quick! so I think there is alot of robbing water from the murray to make houses look nice. this by far is a very wealthy town judging by the houses we saw coming in to town and there is no shortage of money around.
Tomorrow we go to Robinvale via the Sturt highway.
Posted by Janet O'Brien at 2:35 PM