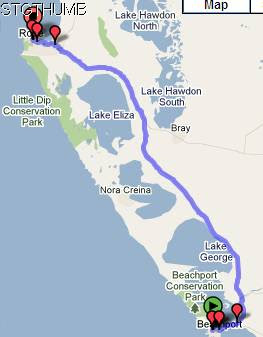 Beachport to Robe = 50km
Cummulative total = 534km
Another sunny day here in South Australia and it started out to be a good day to cycle but by the time we got to Robe we were both a bit frazzled and cussing damn drivers! (I say cussing because at the moment I am reading Huckleberry Finn!)
We had a leisurely start to the day and despite what the profile shows above it was a flat day as the highest point was 10m above sealevel!
The road is very quiet up until you join the road that comes from Naracoorte and then it becomes busier (but not too bad) and more ignorant drivers.
First was a car that for some strange reason decides that there is not need to move over to the other side of the road to overtake us - so he was very close to us. The road is not very wide and can only fit a car each way - some roads have bits tacked on so the trucks when the pass each other don't have to get off the road - but this road was not one of them.
Then what really surprised us was an empty logging truck decides that he also will not move over as he over takes us and all we can do is shake our heads! But wait folks that is not all - the cherry on the cake comes just as we were going into Robe ... listen to this! ... There is a bike lane along the car lane so that is fine it is not wide but enough for us with a little overhang onto the car lane since we are wide loads! anyway the speed limit is 60km per hour and for some strange reason a car decides to overtake a caravan both going in the opposite direction to us and next thing you know there is a car in the bike line in front of us coming head on and what is even worse is that you look at the caravan and the idiot had moved off the road a bit to indicate that it was safe for the car to overtake him - never mind us!! really I think South Australian drivers are a bit like Queensland drivers either dumb or they don't have to have a drivers licence to drive - honestly some days it seems that all dick heads are on the road on the same day as us!
Anyway we survived and are at the top tourist park which is beside a small lake that I have forgotten the name off. 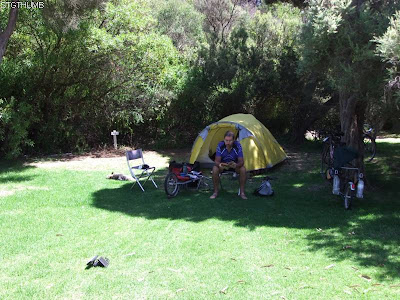 we have a lovely secluded site towards the back of the park - in fact the unpowered section is really nice and all with shade compared with the powered section which has only minimal shade. 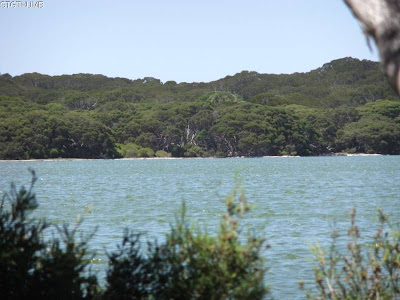 this is a photo of the lake behind us - you can't really see it from the tent unless you get in amongst the shrubs and use your zoom lense!
After lunch we went for a ride into Robe itself - it is very upmarket - far more than Beachport and Port MacDonnell and the housing is big and overstated!
It has a lovely bay and looks like nice beaches but no one really in swimming as there is a very strong southerly blowing. 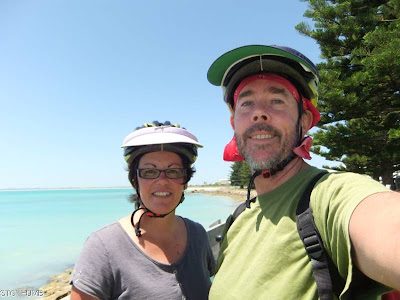 we forgot to put visors on our helmets when in Melbourne so we picked some up at Port Fairy and attached them to the helmets! 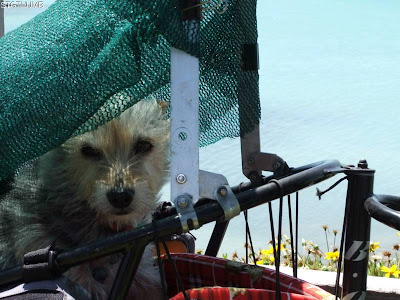 Kouta doesn't look happy as he knows that when we unload the bikes that that is the time for him to sleep until dinner and so he hates going out and doing the tourist thing!
Robe has quite a few heritage listed buildings and they preserve them well - below is the old custom house. 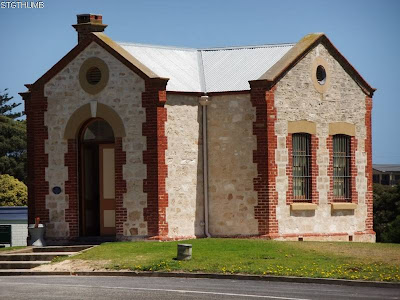 Even the caravan park where we are staying is sort of heritage listed - the YHA manor next door is up for sale and is heritage listed - costs $29 for a dorm bed and $75 per double - very expensive - it costs us $25.20 with discount for unpowered camping! ($28 normally!) 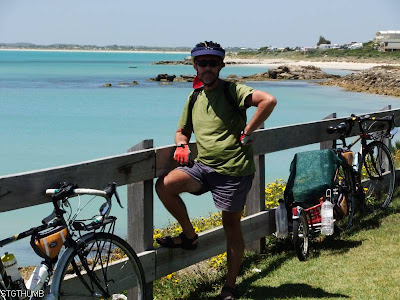 Neil has a new pose!
Tomorrow we have decided to push on to Kingston SE and take a rest day there and fingers crossed the weather forecast is correct and we have raging tailwinds up to Tailem Bend over the weekend.
Posted by Janet O'Brien at 3:36 PM