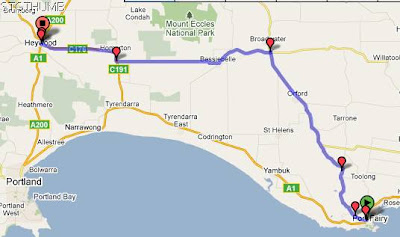 Port Fairy to Heywood = 75km
Cummulative total 262km
Before I start blogging about our cycle today I thought I would share a few photos from the mutton birds at Port Fairy. Unfortunately I couldn't get photos from them coming into their nests as they arrived at dusk and it was just too dark for the camera. However as I was waiting for them to arrive I did get a photo of their burrows in the ground. 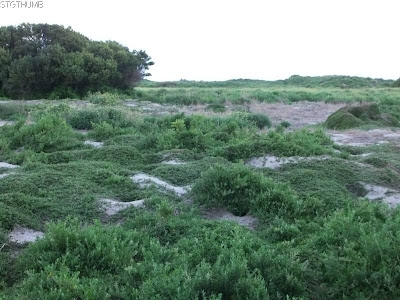 These are all over the island and while we were waiting we did get to see some wildlife apart of mosquitos. 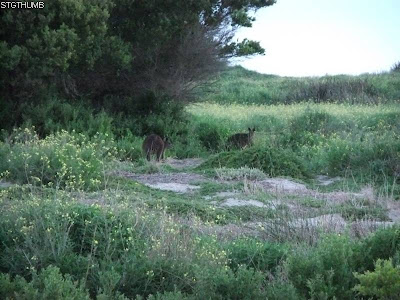 2 black wallabies were grazing near by. Like I said the mutton birds didn't fly back to their nests until 9.20pm and the sun was well and truly down by them. It wasn't what I thought it would be - I expected a big black flock to come in but instead you get this gradual increase in birds in the sky. They are very quiet and tehre is no squawking or screeching and I have no idea how they can pick out their burrow as they all look the same and I also have no idea how they don't bang into each other as they dart around in the sky!
Anyway onto todays cycle. We left just after 8am and there was a gentle south easterly wind which made riding easier for us as we were going North. So we had a good tail/cross wind as we took the road to MacArthur. It is a good road and not alot of traffic but just north of Port Fairy is a big stone/boulder place and as we went along we noticed there was alot of fields with rocks or boulders in them and we came across this in a field! 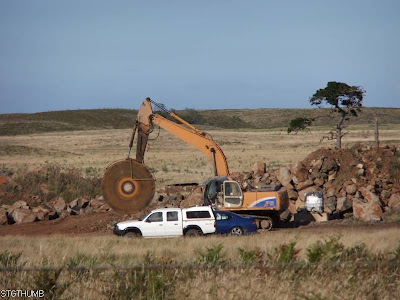 That huge round thing behind the ute is a stone cutter! it was a pity it wasn't going!
While going along you can see these wind turbines along the coast - these are near Yambuk and we passed them last year. In fact the campground at Yambuk is quite close to these. 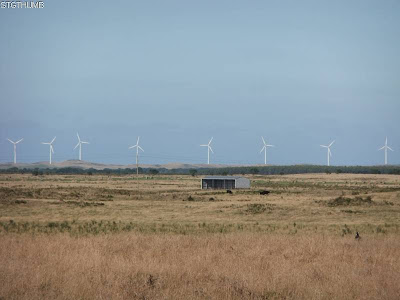 The road is rolling and passes through some small towns like Orford and we turned west just before Broadwater. We had a cuppa at the intersection. 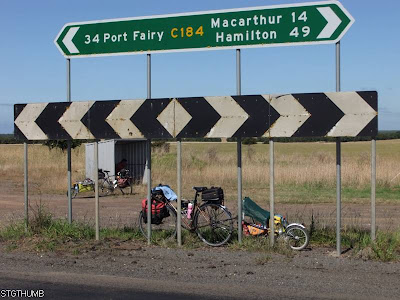 Like I said on a previous blog the area is quite green and they are still cutting and baling hay during February! 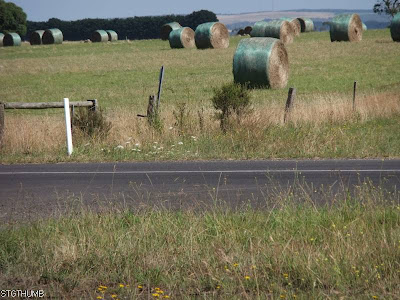 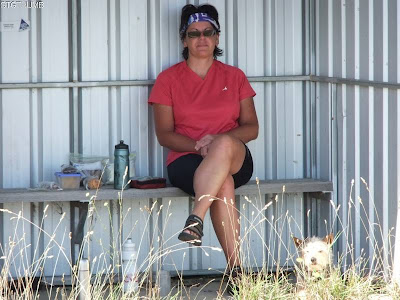 Taking a break in the shade.
We turned west around 11.30 and the wind had gone so we were left to pedal unaided! Not to worry this road is relatively flat and very quiet. To entertain ourselves today we decided to play a little game and had to establish how these small towns and places we go through got their names. For example, ORFORD - i came up with the fact that someone came along in the Orford area and said "oi ford this is a noice place"!!! I also came up with the reason why Heywood is called Heywood - someone came along and said "Hey woodya look at that!" But my personal favourite is Bessiebelle - this small deserted town is named after this bull 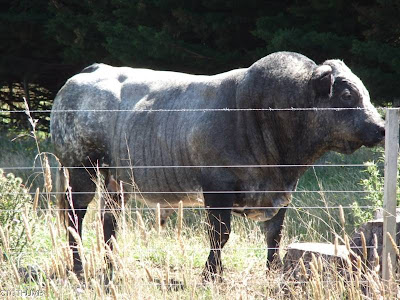 and his name is Bessie but when it came for the signwriter to spell the name out on the board he had no 'u's and only had 'e's so he had to spell it as Bessiebelle!!! Yeah okay it passes the time!
Most of the area around here is either grazing cattle or sheep or Australian Blue gum forests.
Eventually we connected up with the road that runs from Tyrendarra to Heywood. The legs were going okay but we were happy to get here.
The campground is north of the town just before the road splits into going either to Mt Gambier or Hamilton so there are quite a few trucks.
The place is very nice and quiet and we are tucked away down the pack under plenty of shade. The kitchen has basic facilities like a bbq, fridge, toaster and a sink for dishes. The water is a bit better than Port Fairy which is absolutely ghastly and has a very strong chlorine flavour - we had to by cordial to drown out the chlorine taste!
Tomorrow we are bush camping in the same place as last time we were here - in a pine forest on the road that leads from Portland to the border!
Posted by Janet O'Brien at 4:28 PM