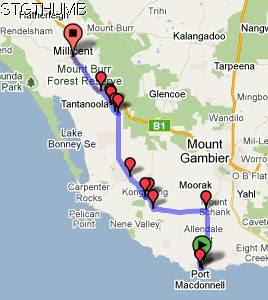 Port MacDonnell to Millicent = 75km
Cummulative total = 446km
I think I ate some dream fish yesterday as I had some strange dreams about the Mexican Cartel trying to kill us! We had fish and chips for lunch yesterday from the local takeaway at Port MacDonnell - the fish was okay but the chips were superb!
Anyway it was blowing all last night and we woke to a few showers but a lovely clear morning eventuated. While packing up the tent we noticed a big wet spot so some of the rain must have channeled under the tent and because of the puddle we also had an extra tennant under the tent! 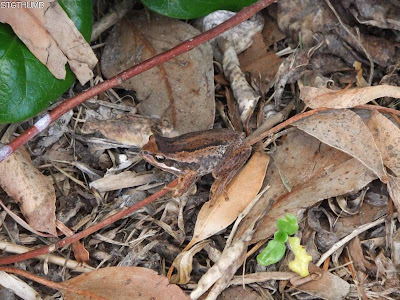 can you see the little brown frog - a very good camouflage!
Anyway we set off with a raging southerly blowing and lucky for us our first 16km was going straight north on the road to Mt Gambier but we turned west at Bellum Bellum and we had a cross wind for about 16km. Along this very quiet road we took a break at Little Blue Lake - it is a great spot for a bush camp (a bit out in the open but there isn't alot around and the road is a minor one although probably not a good spot on the weekend there was alot of car skid marks around!) 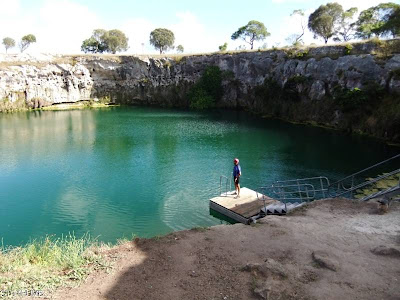 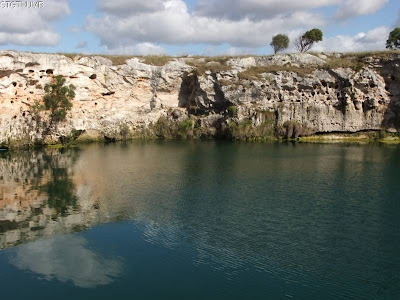 It is a sink hole and the water is very blue due to the sun I think as there are warnings that the water contains algae and advise that if you have sensitive skin that you don't go in!
Lucky for Neil he found yet another pair of jandals/thongs. However way back at Peterborough he forgot to pick up his Nike pair that he found going up the Gillies highway in Queensland last year so these jandals will replace them!
We had a lunch break at Kongorong - now this is a sleepy little town and we saw no one around. It has a very good recreational park facilities - a well maintained footy field, netball courts, basketball court and excellent toilets and clubrooms.
From here we go North west towards Tantanoola and Millicent. The going is good as we have a tailwind again - strong but not strong enough that we don't have to pedal! we could sit on around 18km per hour. It is flat and I think maybe a few cars and trucks passed us - this is a very quiet road and I am not sure if it is because it is a Sunday or it is like that during the week - probably the latter.
Along the way you can see the huge wind turbines - Neil decides to try and count them and he estimated around 100 or more. 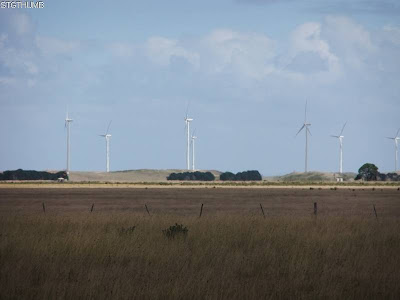 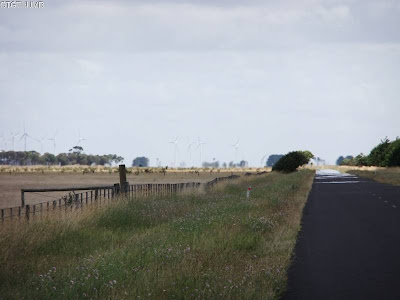 it is hard to see them in the above photo as they are miles away from us! Once we got to Tantanoola the legs felt a little weary and the road took us to the main road between Mt Gambier and Millicent and we came along this road last year. Our road came out near the Kimberly Clarke factories where they make toilet paper etc.
This Mt Gambier - Millicent road is a little busier but there is a shoulder. About 12km later we got to Millicent - now Millicent has probably got the longest stretch into town before you actually hit the shops - I would say there is about 3km of houses all along the highway before you get to the shops! I had a feeling that Woolworths was closed but Neil thought it might be but I was right I think South Australia is a bit like Queensland and closes on Sundays except the bigger towns and cities. Lucky for us the IGA was open and it is a reasonable one.
We have come back to the same campground as we stayed at last time we were here and it is very quiet and right next door to the town swim hole which is too cold to go in - that southerly wind is still blowing and it is very lazy!
Tomorrow is a short day to Beachport so we will swing by Woolies and pick up supplies.
Posted by Janet O'Brien at 4:52 PM