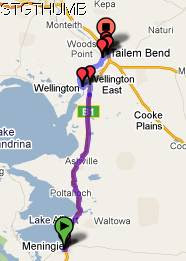 Meningie to Tailem Bend = 60km
Cummulative total = 787km
Lots of photos for you today!
Yesterday we had a lovely rest day at Meningie and caught up on our washing and played scrabble.
While waiting for my turn at scrabble I was watching this small bird dart in and out of the tree that we were under - it was completely oblivious to us there! 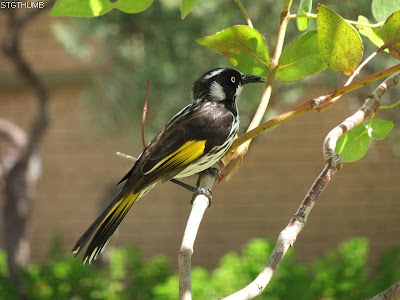 It was hard getting this photo as it wouldn't sit still long enough for the camera to focus on it! 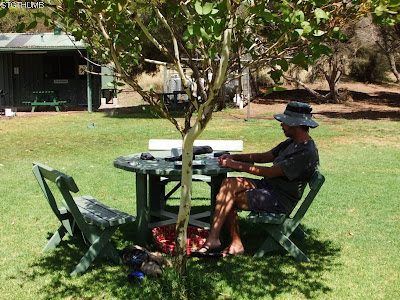 here is Neil trying to think of a word at our game of scrabble. 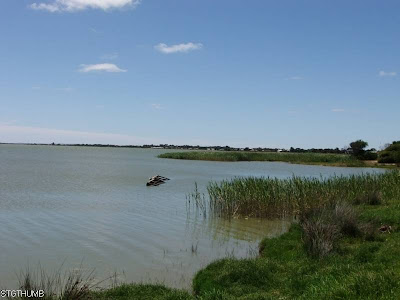 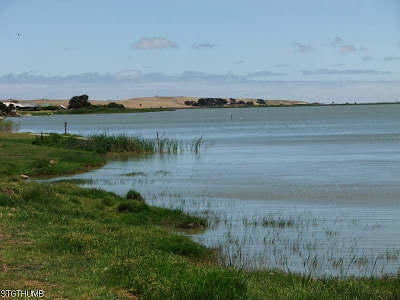 these are photos of lake Albert which the campground is alongside. Apparently this was quite empty last year but due to recent rain and flooding the lake is full.
The ride today was good - most of it was along the highway as there is no alternative until you get to the turnoff to Wellington.
The first 15km out of Meningie is flat and then there are 2 hills and again along flat until just before the Wellington turnoff there is a small rise.
Basically while riding along the flat the land looks pretty poor and desolate. If anything it looks like it should be under sea - there are lots of dry salty looking patches 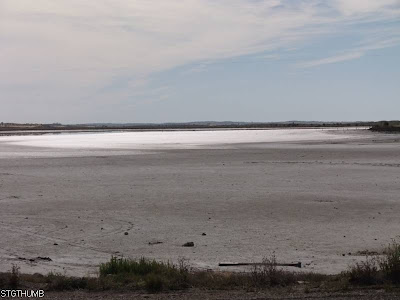 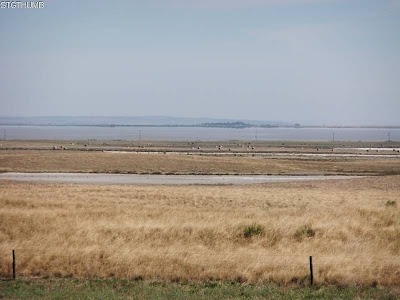 When you ride along Neil described it as being very washed out in terms of taking a photo - it is hard to distinguish between land, lake and hills they are all very similar shades of grey, brown and green - not link in the outback where the colours are very contrasting. In the above photo the mountain range in the way distance is the Lofty ranges then grey bit below that is Lake Alexandrina (which the murray goes into) and this is a massive massive lake which also feeds into Lake Albert. 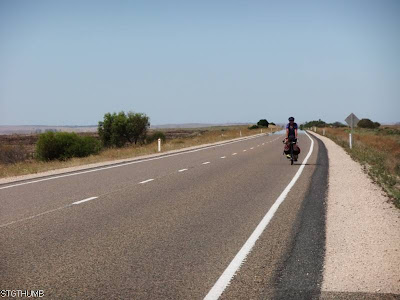 This is the highway we are on and it was okay today not alot of traffic coming at us from both directions so we could ride on the road most of the time. If you look at the shoulder it is 2 toned and there is a slight ledge so going into the shoulder was only done when we really had too! 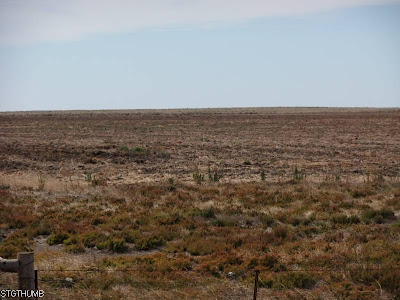 Sometimes we wondered just what grows out here and judging by the photo above .. not alot! 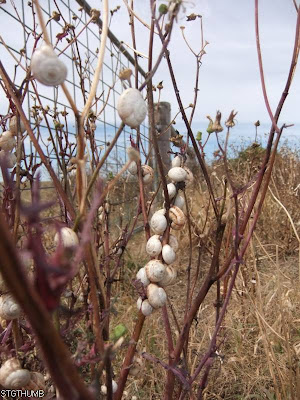 there are millions of these snails - everywhere along this coastline. they look like across between a garden snail and sea molluscs! 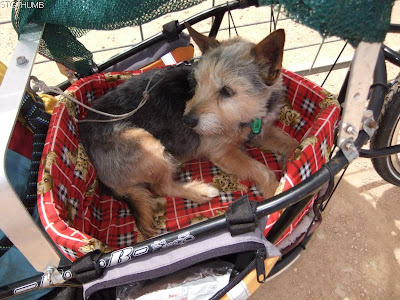 here is kouta sporting his new haircut and todays temp was around 25 degrees so i think he appreciated the hair cut and tomorrow it is going to be around 30 degrees I think - no more coastal breeze for us!
We we happy to get to the Wellington turnoff as that meant we got to go on the ferry. It is free for everyone to go on the ferry across the murray as it is part of the National road system. There are around 11 crossings here in SA and we plan to go on most of them. 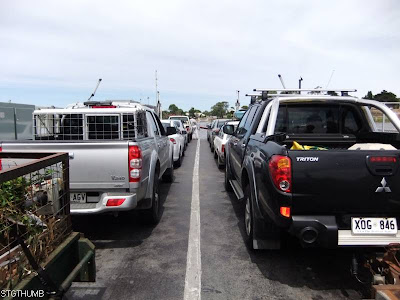 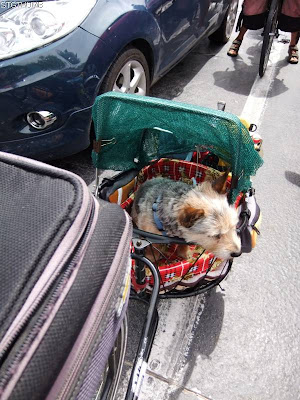 this is Koutas reaction when he found out the ferry moves not like being on a road! 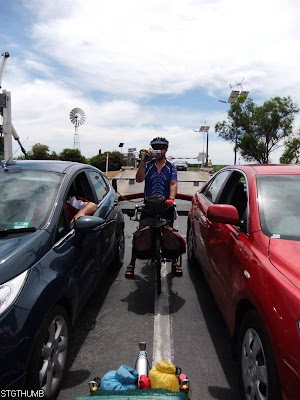 me looking back at Neil 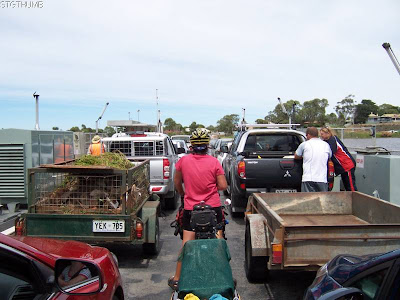 and Neil looking at me! 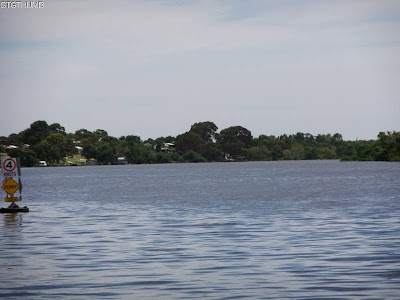 The murray looks very full and calm - there is just something about this river that I like - it is very majestic and I am looking forward to following it back to Swan Hill at least!
Once off the ferry we took a lovely quiet road towards a small town called Jervois - we could have stayed on the other side of the murray and not crossed over but that meant that we were going to stay on the main highway and we were getting closer to the bigger places and so there was going to be heavier traffic.
So it was lovely going along this really quiet road - and I tell you the drought really must have hit down this end of the murray really HARD! Along this quiet road is nothing but milking farms - I would say about 1/2 are still functioning while the rest have given up. There were heaps of run down disused milking sheds and the fields along the murray were a little green but the ones on our left were very dry. I assume after 10 years of very little or no water down this end of the murray the farmers have had to give up (that was the case in Meningie) and off those that still are functioning they seem to only have a field or 2 irrigated. Hopefully with all the rain and the murray flowing nicely now they can irrigate the other fields. I would have like to have come through here before the drought just so I could see a difference - for all I know it may have always been like this!
at Jervois we crossed back over again. 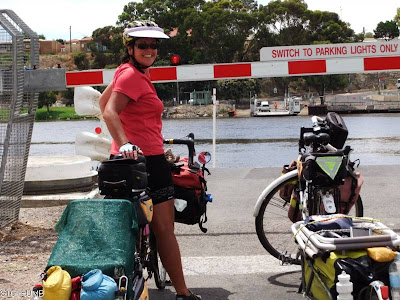 Here I am waiting for the ferry to return. This crossing wasn't as busy as the other one. 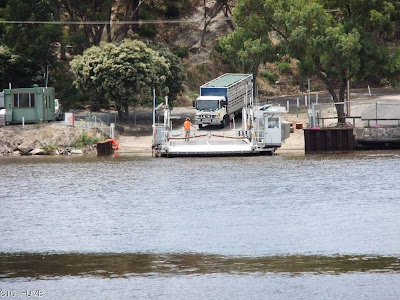 small trucks can also go on the ferry the one in this photo had a load of sheep on it.
Once at Tailem Bend the campground is only 2km north so we rode in the service lane. The campground is a little run down to say the least! although at the front of it they do have this nifty bike! 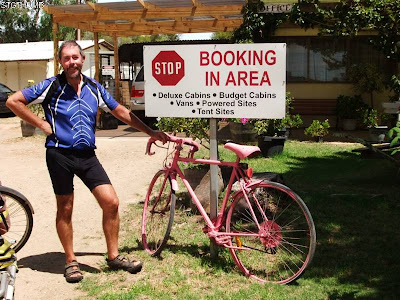 I don't think it works though.
The park has provisions for alot of permanents and seasonal workers. At the moment it is very quiet - the photo in the brochure looks like it is situated at the rivers edge but I think that is flooded at the moment so I am not sure if the tourists usually go down there but for us we have been put up top and have a spot under some big trees and are surrounded by run down looking caravans. The shower block is a little worse for wear, the kitchen is just undescribable! and the laundry is okay. We got charged $20 for unpowered - I think '$20 too much!
Tomorrow we go to Purnong there is a good rest area near the ferry landing according to camp 5. We have to bypass Mannum as they don't take dogs at the caravan park. Not sure how the rest area will be since the water is high in the murray so maybe it won't be suitable for camping - not sure what we will do then!
Posted by Janet O'Brien at 5:31 PM