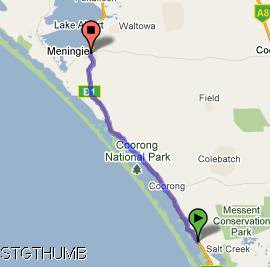 Salt Creek to Meningie = 60km
Cummulative total = 727km
Gosh it was quiet last night, there was no one around us and we had the entire field to ourselves! 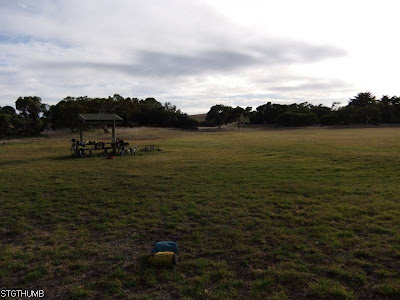 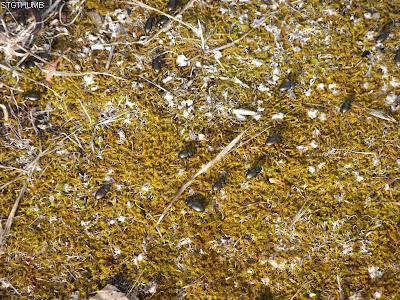 They are everywhere under things - the congregated beneath our pannier bags (not in them!) and under the black polythene that our tent sits on. Poor things I suppose they are just looking for somewhere to live! Not only did we encounter these little black bugs but I tell you I have seen some bull ants in my travels but the 2 I saw here just took the cake! and I mean that literally they were soooooooooooooo big I thought they were on steriods - I could see them without my glasses they are that big - no exaggeration!!!
Anyway we left a little later this morning as we decided to give Kouta a hair cut - it has been a little warm and although we give him the occassional tablet to stop himself from scratching we have noticed that he hasn't stopped like he normally does. So I thought that since it has been so warm lately that maybe he is sweating and is a little hot and that may aggrevate the ictchiness - we are reluctant to give him too may tablets as they are cortisones and prolonged use of them leads to Diabetes. So fingers crossed he stops scratching - Neils theory is that he wakes up too early and sees that we are still asleep and he gets bored and ends up scratching and gnawing at himself!
Initially the day started out very sunny but then the clouds quickly came over and it was a grey day - no rain though.
It was pleasant riding - undulating but okay and you followed the coastline sort off - actually the road does follow the ocean but officially it is not the ocean but sort off like a salt lake that is long and narrow as on the opposite side is part of Coorong national park. 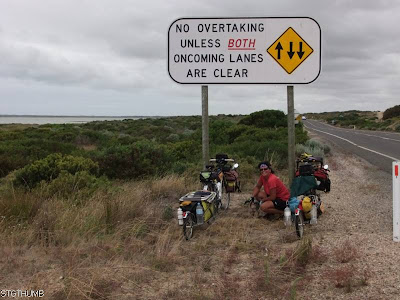 taking a break and they even had overtaking lines on this part of the road! 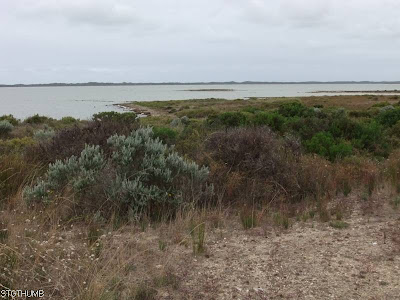 above is a photo of the would be salt lake and between the road and the lake is national park lands (I think it is) and in the distance you can see more land that is a narrow strip the goes on forever!
We had a cuppa at one of the national park areas and we came across this sign regarding the camping fees -
for a car load off people (up to 8 people) is only $11.00 that means if you have 8 people in 1 car they camp for $1.38cents per person
for a motorcycle it is $6.50 so if there is 2 people on a motorbike that is $3.25cents per person or $6.50 for an individual
if you are hiking or on a bicycle it is $5.50 per person to camp
So for some strange reason, only known to the national parks of South Australia or Australia, if you are environmentally friendly you pay $5.50 to camp, if you are a motor vehicle that pollutes and churns up the environment you may only get to pay $1.38cents to camp ... what the ....!!! 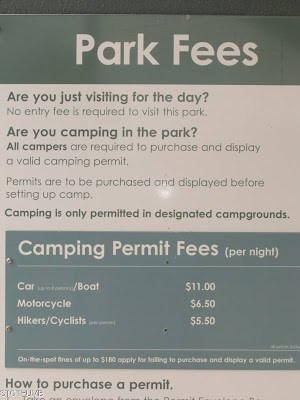 it is outrageous regulations like this that, despite the fact we don't camp in national parks due to Kouta, make us not want to camp in national parks!
We got to Meningie just after lunch due to a very good tail wind. The campground is a top tourist and with our discount is costs $19.80 to camp unpowered. There is a kitchen which has fridge, jug, toaster, microwave and a sort of small oven with elements. It also has a TV room and dining area - very nice. We may stay here tomorrow since it is so nice.
We say farewell to the coast now and will go to Tailem Bend on Monday and start following the murray river up to Renmark, Mildura and then maybe Swan Hill and cut down to Colac - not sure depends on the weather and the amount and where the flooding is! We may find that we get to Renmark and most of Victoria is flooded! if so we will duck straight south and come back through Bordertown.
Posted by Janet O'Brien at 4:37 PM