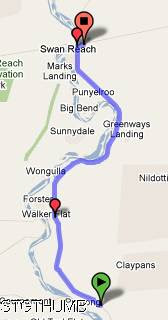 Purnong to Swan Reach = 43km
Cummulative total = 890km
We had some fantastic views of the murray river today but first we had a long clim out of Purnong and back onto the road that runs north to Swan Reach - we had a late start - around 9am and by then it was quite warm.
Like yesterday there is no shade from trees as you cycle and you are out in the open. It is hard to see what everyone does to make a living out here - we see lots of onion, pumpkin and even corn filds or evidence of onions alongside the road but believe it or not we didn't find one onion to pick up and have for dinner!
We were both feeling a little weary from yesterday - I think the heat and all the climbing really took it out of us.
Never the less we plodded on.
Along this road there are a few stops where you can take photos of the scenery. Below are 3 taken near Walker flat. 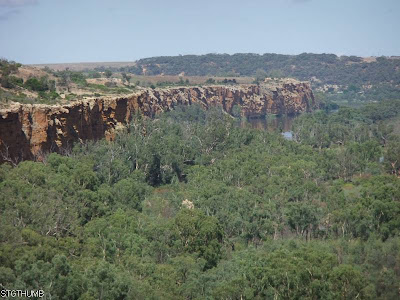 the escarpement is great almost like the Grand Canyon but on a way smaller scale! 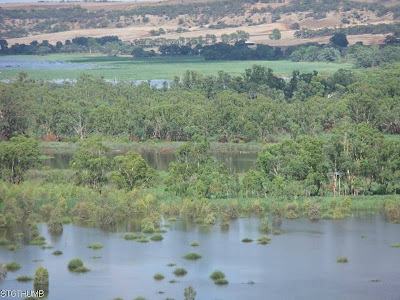 I think the murray is the top piece of water and the one at the bottom is just flooding from the murray! 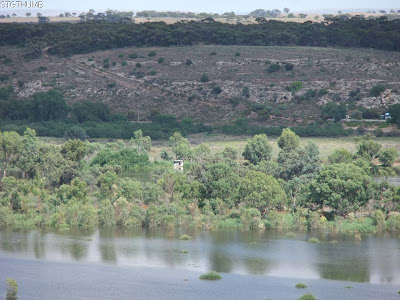 it is hard to know where the actual murray is sometimes as there are still quite a few plains that are under water and look like they will be that way for a while.
We stopped at a town called Nildottie and took a break there - we were very exhausted and almost dehydrated - it is still very hot and unfortunately I couldn't fit any more water into my stomach but I could feel myself needing that water. So we stopped had something to eat and was able to get more water into me. This small town of Nildottie has the best view of the murray and Neil looked at the price of housing - anywhere from $300,000 to 1/2 million - all because of the views! 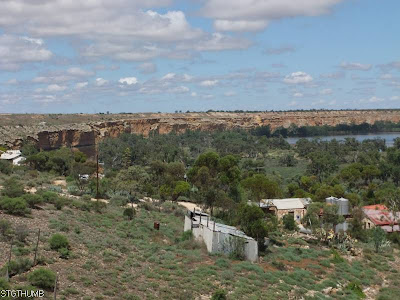 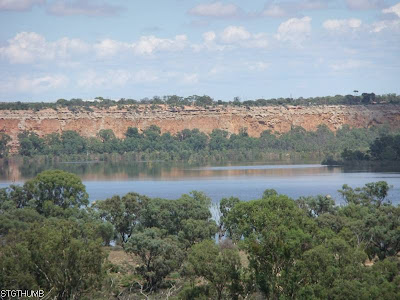 this is their view!
Just before getting to Swan Reach there is a nice view of the cliffs going down to the murray and Swan Reach is suppose to have the highest cliffs along the murray. 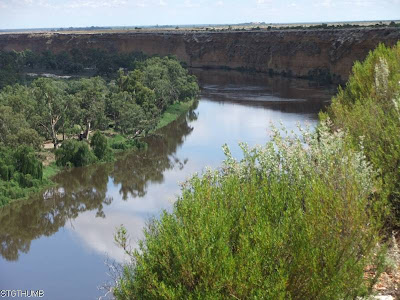 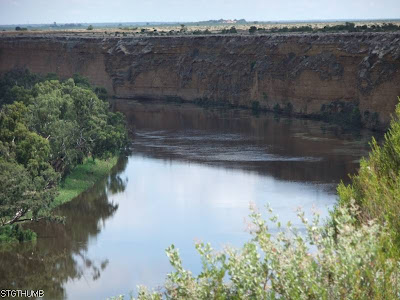 We get to the campground knackered and gunky and all I want is a shower! there is not much shade in the campground but there is a small shrub behind us that offers some shade so all 3 of us are crowded in this little area of shade. We have a powered tent site as it was only an extra $2. 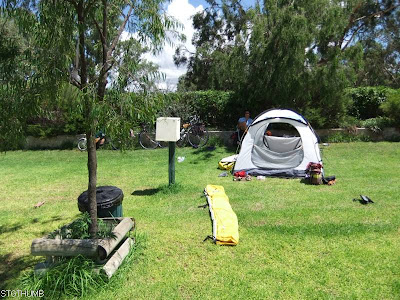 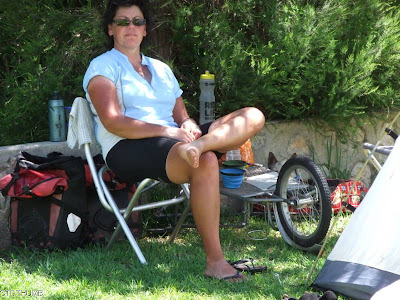 as you can see I look buggered!
But after a shower and a cuppa I feel good now and I have even begun to get my appetite back!
Not sure what we will do tomorrow - bad weather is forecasted for Friday so we might try for Morgan tomorrow and rest there and hopefully sit out the bad weather.
Oh the mossies are a bit nasty - not as bad as what I thought they would be but last night at Purnong some how at least 20 got into the tent and I reckon they work in groups - some buzz about for you to try and kill while some land on you and suck blood - I tell you after killing all 20 our tent looked like a massacre had occured there are blood stains all over the tent itself from where they have sucked our blood and we have killed them with engorged bodies!
Posted by Janet O'Brien at 4:14 PM