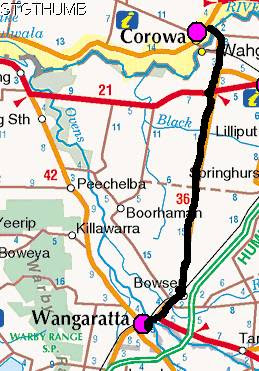 It is only the beginning of November and it is hot ... 4 weeks ago we were complaining of the cold now we will complain because it is too hot!
We left Wangaratta early this morning after saying our goodbyes to Neils parents and loading up with the left over baked goodies that we couldn't consume over the past 3 days!
The legs felt okay and well rested. It was only a short ride up to Corowa in NSW, just over the mighty Murray river. Over the next week the temperatures are to be in the early 30's so we will just try to ride in the morning while it is cool.
The road to Corowa was long, straight and bumpy but at least it was quiet with only local traffic using it with the odd big truck now and then. No where to take a break so we had to rely on farm gates. In one little pitstop poor Kouta was hounded by flies but he quickly cottoned on that if he laid in the shade they wouldn't annoy him ... or he could have been hiding from us! 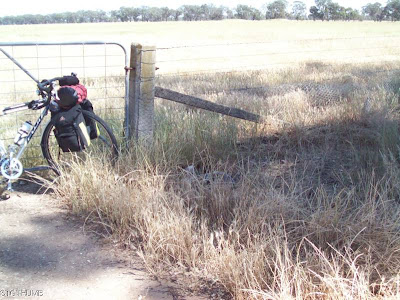 "Where's Kouta?"
We got to the border (the Murray river is the border between Victoria and NSW) just before lunch and I suppose I just wanted to go to Corowa just to say that we went into NSW this trip! Below is a narrow bridge (one way bridge) that we weren't allowed on and we had to take the pedestrian path which was only wide enough for our loaded bikes ... too bad if someone was coming the opposite way! 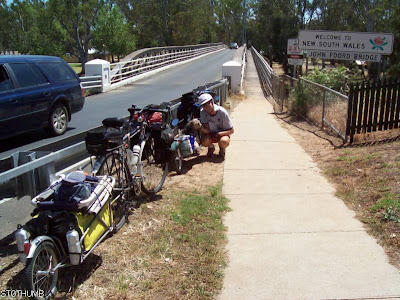 By lunchtime it was beginning to heat up, the caravan park is full of holiday vans with no one in them at the moment, so there is only a few families in this huge park. It is the weekend so the river is crowded with local and CP people. We did go down to the river to let Kouta cool down and cool our feet off ... Kouta doesn't like water and was a bit annoyed that Neil kept putting him in the river and wetting him, Neil did it around 3 times and in the end all Kouta could do was start making his way back to the tent by himself ... I think he was that peeved off with us over it that had we not called him back he would have marched off back to the tent he was in a real huff over being wet!!! stupid dog! 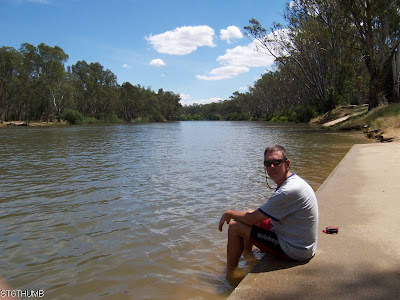 the mighty murray river!
Tomorrow we head for Yarrawonga and the CP doesn't take dogs so we will continue on for around another 5km and become feral and do a bush camp along the murray ... might even throw myself in there just to cool down! looking forward to it!
Posted by Janet O'Brien at 4:01 PM