Thanks to Neil who did last nights blog for me ... unfortunately while playing card games yesterday afternoon I got rather carried away with rubbing my right eye due to the hayfever symptom of itchy eyes and next thing you know my eye is all swollen and weeping and red ... I am a naughty person for rubbing it but I just couldn't help it!
I woke this morning with my right eye still swollen but it didn't hurt at all so we decided to come to Ararat and if it was still bad by the time we got here then I would go to the Doctors. But lucky for me the swolleness went down and I resist the urge to rub the eyes now!
Anyway it was a hard days cycle for me today because not only did I have a swollen eye but also I had a small niggling injury in my left knee, I think it was from the day before, I was pedalling along concentrating on my head wind and didn't realise that my left foot placement was a bit crooked and I had been grinding away with my foot at a severe angle and that is when I started to feel it in the Knee, but it held up today quite well so with a rest day at Ararat it should be right no long term injury. Although my feet tend to move alot on the pedals so Neil and I are seriously looking at getting cleats and clip in shoes to prevent the feet from moving.
The ride to Ararat was uneventful but definitely this side of Avoca is greener than the other side. We noticed that the fields were just that little bit greener and the trees were more varied and looked alive!
Not only is it more greener the more west we go but the people are more friendly to us. Our first small rest stop was at Ampitheatre and as we rode along through the town an old man came out to the top of his driveway and offered us a cuppa! We declined since we had not gone very far and the day was beginning to warm up, had it been an hour later I think we would have accepted. Then we stopped at a place called Elmhurst and Neil just had to take a photo due to the name. 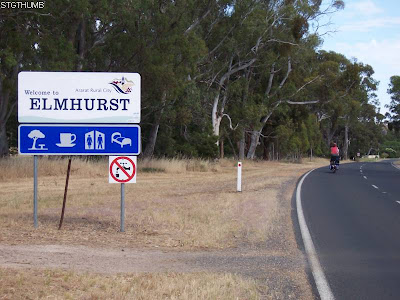 While at Elmhurst a lady came over to chat with us and she offered us some raintank water for us to top up our bottles as as you can see by the sign that there is no drinking water ... we assume that it means that the tap water available in the reserves and toilets is bore water and not suited to drinking. As I have said in the past the water at the caravan parks are mainly bore water and it can be unpalatable at times but at Avoca and Dunolly caravan parks they also have rainwater tanks which is strictly for drinking only so we have been getting our water from the tanks. The tap water here at Ararat is okay and nice to drink.
While riding we crossed over the Pyrenees (seems funny to call them that as they are only a small hill range and not as its huge cousin along the French and Spanish borders!) I didn't realise that this range is part of the great dividing range and we were both surprised when we came accoss this sign and off course we had to take a photo of it. 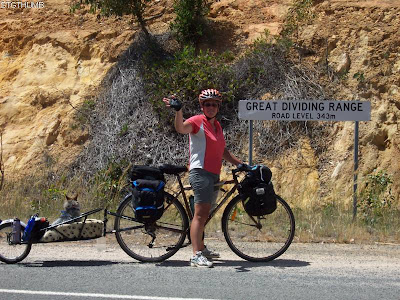 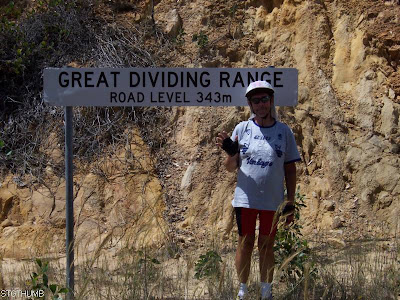 We got to Ararat just after lunch but it felt much later, maybe because it was already hot by then, anyway we pitched our tent right next to the camp kitchen and it has shade for tomorrow. While setting up one of the camp residents came over and gave us a cool bottle of lemonade as the dear ole lady thought it was great that we were doing this cycling and she thought we would appreciate this refrigerated lemonade ... what a lovely lady she was and believe me it was well appreciated! It reached around 33 degrees compared to the last 2 days where it has been lovely and cool and tomorrow it is going to be a scorcher at least 38 degrees but the weekend will bring a cool change so only a few days of hot weather ... whew!!!
Posted by Janet O'Brien at 6:10 PM