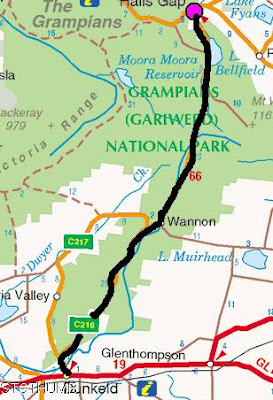 Oops I am writing this a day later as it was rather late when I finished sorting out all the photos to put on todays blog.
Anyhow from Halls Gap to Dunkeld was nothing but up and down, up and down with a bit more down than up for us heading South. We left the campground, on a cloudy day with forecasted rain, nice and early to try and get to Dunkeld before the rain would hit us. Not far from Halls Gap is Lake Bellfield which is a fresh water lake that provides the surrounding districts with their water supply and like the Melbourne Dams it was not fulln at all and you could see where the normal water levels would be and it is well below that! Like I said the day was very cloudy and that is a pity as we would have had some fantastic shots of the lake and scenery! 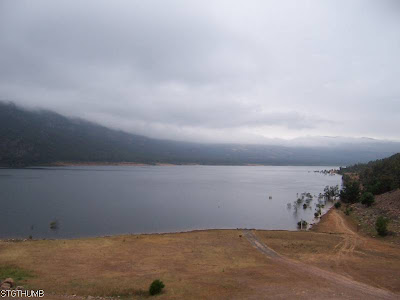 Lake Bellfield
Since the road goes through a National Park the road condition was excellent (upon the Mt Hotham descent the road was crap before and after the Alpine National Park section!) and also there was not much traffic not only because it was early in the morning but also throughout the entire day so it was glorious riding with glorious scenery of severe escarpments. 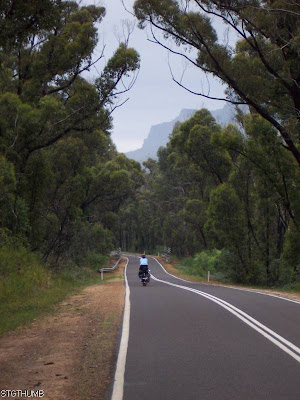 The thought did cross my mind that the scenery would be a lot better if it had no trees (or if they were dwarf gum trees) as sometimes you could not quite see the rugged escarpments, but I suppose without trees the scenery would look quite bare!
From Halls Gap you feel you were climbing a bit, although not steep climbs just gradual and without even realising it we came across this sign! 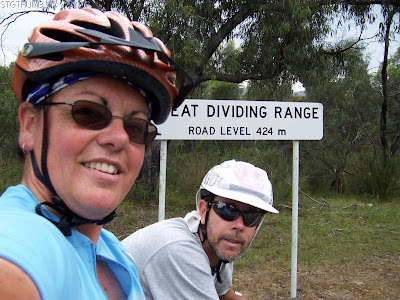 Neil did say before we got to this sign something about we should be crossing a divide and I questioned him about the Continental Divide doubting it, but he said (and we all know how Neil can talk complete and utter crap sometimes!) no something about the Grampians' Divide, and I knew as soon as he said it that he was making it up! and to our surprise we did actually cross the Continental Divide again (we crossed it just before we got to Ararat and before that we crossed it just before way back in Omeo!).
Not long after that the road was a gentle downhill and I nearly had a collision with a wallaby! It gave me one hell of a fright as it came out from the undergrowth which was about 1/2 meter from the road edge onto the road less than 5 meters from me I screamed and slammed on the brakes as I was cruising at around 25km per hour, the wallaby didn't stop but realised that I was there (and I am sure it screamed too!!!) and quickly hopped off scared just like me! Kouta meanwhile was hopping and throwing himself around in the trailer really excited.
We saw alot of Kangaroos bounding across and in the bush throughout the day and some of the Kangaroos were big at least 2m tall and I am sure glad we didn't nearly crash into one of them!
Like I said before the scenery throughout the day was simply beautiful and so drastic. The escarpments are like giant ski ramps all going in the same direction 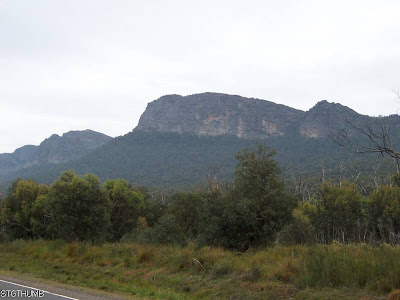 It would have been fantastic if the day had been clearer and not so cloudy to see the sunlight on the cliff faces.
Throughout the park there was evidence of fires that had gone through (we think around 3 years ago) but when we got closer to Mt Abrupt the landscape was more low lying shrubbery and I am sure there must have been fires very recently as there was heaps of Kangaroo Tails and I love these types of plants and there was quite an abundunce of them all with their tails and green grass with black stumps. 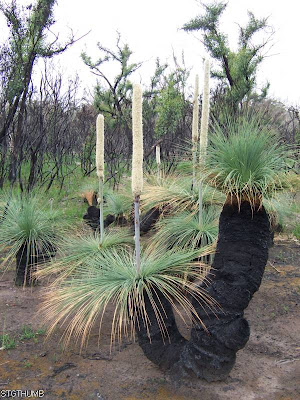 I think around the 50km mark I began to struggle a bit, Neil says I hit the wall and refused to go any further but I don't remember that part and I know that Neil was just talking a lot of crap again when he retold the story to Sharon last night on the phone! But at that point the road had become quiet undulating with longer climbs and I could see that the road was heading to Mt Abrupt 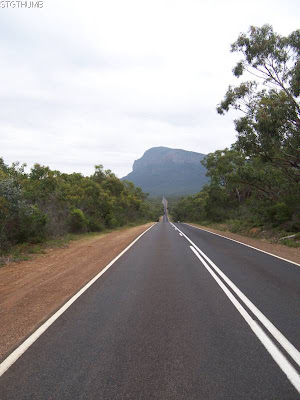 But fortunately it was only a small climb with a long fantastic down hill to the road that links Hamilton with Dunkeld and when we got to that highway the road conditions just deteriated and it became "a real tit wobbler" and to a point quite dangerous as they had filled in pot holes with tar and it looked like the road was covered with muffin tops (have they not heard of flattening out the roads once they fill them in so that the pothole top is flush with the rest of the road?!).
So we arrived at Dunkeld at around 1.30pm and we knew it had a council caravan park and you sort of think 'oh a council caravan park!' well this one was crowded when we got here and it is a great little caravan park with really good facilities (considering it is a council one ran by volunteers) and money collected from camp fees are put back into the park as they renovated the womens toilets - new toilets and 2 huge big practical showers, and they built a disabled toilet and shower facilities and now they will renovate the mens showers and toilets. So I had a luxurious shower and came out gushing about the showers and how excellent the facilities are and poor Neil only had the old shower and toilets in the mens!
We have stayed here another day as we woke up this morning and the rain that was meant to be here yesterday came last night and this morning. Although there are no grocery stores to speak off we will have to buy takeaways tonight for dinner as we carry our breakfast and lunch food but rely on the town to have some sort of store to buy our dinner.
Tomorrow we are off to Lake Bolac and we don't think there is much water in there!
Posted by Janet O'Brien at 12:44 PM