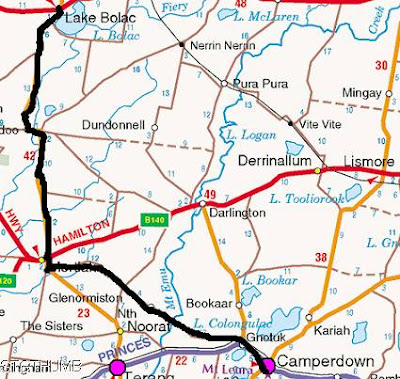 Last night we went for a small walk to have a look at Lake Bolac and the guy at the caravan park said this time last year it was completely empty, so it has rained quite a bit but still not enough for aquatic activities (hence the rundown facilities). 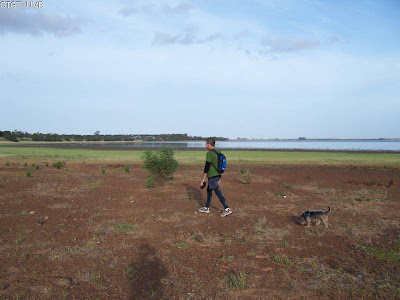 Lake Bolac (I like your tights neil!)
So we woke up early this morning to get a good start as we knew we would have a gentle tailwind and Neil even suggested that we skip Mortlake and continue on to Camperdown and not Terang as it is only 29km further from Mortlake ... more on that later!
It was a quiet ride almost dead straight to Mortlake except for a little kink in the road and like yesterday the road is absolutely ridden with pot holes and uneven surfaces ... it got to the point that we would sometimes have to go over to the other side of the road to get around parts of the road that were broken up ... it really was an awful road to ride. The only positive to it was that is was relatively quiet with cars and trucks!
We cruised along at about 21km per hour and arrived at Mortlake at around 10.20am and decided since it was only another 29km to Camperdown we would continue to make the day to Colac smaller ... well after leaving the quiet little town of Mortlake and saying to myself that I would like to pass through here again to have a little look around as it looked quite a nice town. We took a quiet road to Camperdown and that surface was really good. By now the wind had swung around to our right and we had a slight crosswind but eventually the road swung around to a south easterly direction to give us a tail wind. We estimated that we would arrive at Camperdown at about the 70km mark.
We were riding along and came across a road sign with distances and Neil realised that he can't read a map or count the total distance between points (this is what Neil told me to type!) he miscounted by 10km so we were going to hit Camperdown at the 80km mark ... now the distances are from Post Office to Post Office so you should always add extra kms to avoid disappointment!
At the 70km mark I began to feel it and began to slow down and we got to the outskirts of Camperdown and we weren't quite sure where the caravan park is and Neil wasn't sure so we got the computer out on the side of the highway and saw that it was on Park road ... which was oppposite us but Neil doubted it was that as we had to go up a huge hill and we could not see the caravan park so we continued into town as we had to get food. He looked up again for directions on Google and it was about 3km back (where we were before!) so we rode through the back streets and it was obivious that the caravan park was on top of a hill. Now Camperdown is quite hilly and has alot of craters and the hill to the park was just long, not hard, just long especially since we had already ridden 80km. 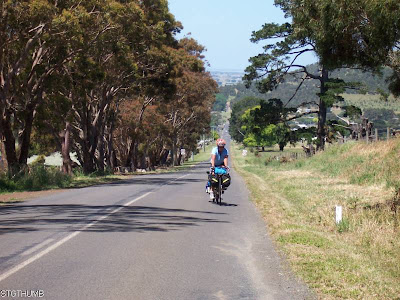 Me slowly coming up the hill! but I had nice views either side of me!
We made it to the park and we have a lovely spot next to a small field that has 2 small bulls and another small field that has a horse. The brown and white bull really had a preoccupation with Kouta and just stared at him all afternoon! 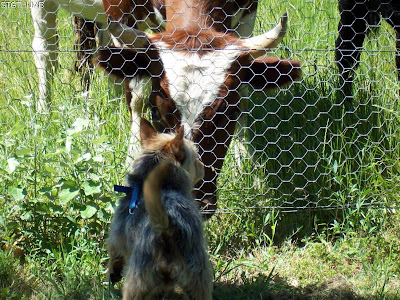 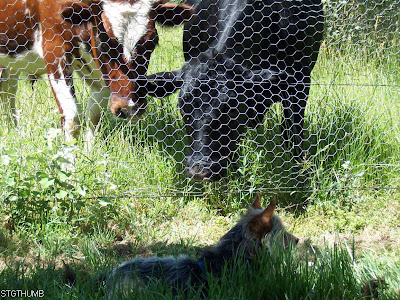 Eventually Kouta just sat in the shade while the 2 bulls just stood at the fence staring at him. The black bull was alot more friendlier to Kouta than the brown and white one.
Whereas I developed a friendship with the horse! 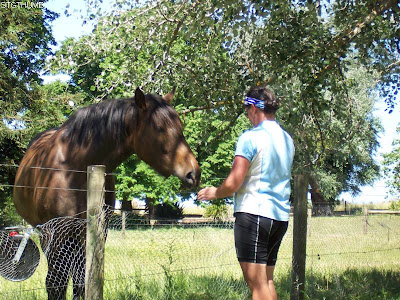 Tomorrow we will cycle the back roads to get to Colac, it is 47km via the main Highway and I detest riding on the highway - cars expect you to ride the shoulder and it is generally a rough part of the road so I prefer the back roads even though we will probably do an extra 20km! Some of the roads we have been on before but still the roads are lovely and quite, not exactly great surfaces but quiet!
Posted by Janet O'Brien at 5:04 PM