Due to next to no reception at Dunolly for the internet I have done what we rode on Monday 16 Nov today!
Well we are back into it after a fabulous rest at Bendigo. It is amazing what airconditioning and sleeping on a bed can do to you!!! We spent the weekend inside watching Tiger Woods win the Australian Golf Open and eating!
Leanne and Russell had a lovely BBQ on Saturday night with all their friends (and Neil and I decide to gate crash that!). I don't think Neil and I know that many people as what Leanne and Russell have as friends (and they are a very friendly and eclectic group of people!) it was a great night and Neil and I went to bed at least 3 & 1/2 hours later than normal!
So it is easy to start today as we didn't have to pack up much. After getting directions from Leanne as to the best way to get to Marong we left at about 8.15am and within 1/2 an hour we were lost! We were on the bike path and then all of a sudden it disappeared and we were on a foot path so we continued on and couldn't find the streets on the map we had and we came across a Lollipop Man at Eaglehawk who came to our rescue and the directions he gave us to get to the road that would take us to Marong were spot on right to the last detail of key landmarks, speed zones and pubs on the corner! Thanks to the Lollipop man!
We were on our way with a severe cross wind and lovely overcast day so there was no heat! The road wasn't that busy to Marong and once there we had a break and began the journey to Newbridge. Once there we had a longer break and a nice man who was in training for the Victoria Bike Ride came over to chat to us. Off all the cyclists we have met I thought he was the only one that spoke to us in a way that was not patronizing or in a way were they feel they have to compete with us by telling us their cycling conquests! He was a real pleasure to listen and talk to and he seemed genuinely interested in what we were doing instead of telling us of his cycling conquests!
By now I was beginning to tire and the cloud had lifted and the sun was out. The road turned almost south and so the real headwinds began. Since I am at the front I sort off turn off after a while and tuck my head in and just grind away against the wind which is not a good thing as around 13km out of Dunolly while I was looking down there was a snake and it was glossy (which means it may have just been killed or it is still alive!) I went past and then Neil did and all I could say was "oops there is a snake!" Neil went back to take a photo of it. Do you think it looks alive? 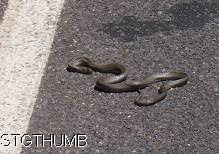 After that we cruised into Dunolly. We have been here before but I couldn't picture it in my head but once I saw the main street I remembered it and even the Caravan Park seemed familiar.
It has lovely Poplar trees which provide good shade so we set up the tent under a tree and Kouta quickly jumped into the tent to sleep ... I think he misses Lucy but he seemed happy enough to get into the trailer this morning! 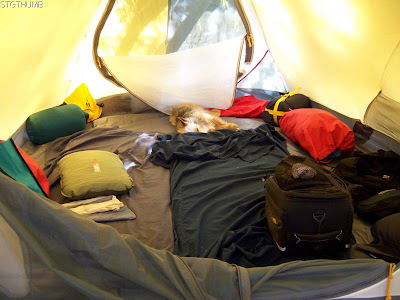 We only have a short day tomorrow to Avoca, again we have been there before but I still cannot picture it. Some of the towns we have been through on this trip we have been through before and it has been around 11 years and I suppose there has been a drought during that time so that this time as we pass through them they are almost unrecognisable without their lush greeness and grass!
Posted by Janet O'Brien at 1:30 PM