29/10/09
today was a badly needed rest day and what was meant to be a nice relaxing day in the quiet little (but hilly) town of Omeo in the end turned out to be a very stressful and worrisome day!
All was going well until around 4.30pm and then the clouds quickly came over and then there was thunder and lightening and torrential rain = 25mm in 1 hour and all Neil and I could do was watch the rain pour down from the kitchen shelter and watch the ground slowly build up with big puddles as it is slow to absorb the water. What was funny about the whole episode was the fact that the spot where we originally were going to camp would have had a big puddle there ... but that is not the worst of it. Once the rain stopped and Neil was on the phone to his parents I was just watching the creek and then realised that I shouldn't be able to see the creek and next thing you know there is an almighty noise and the creek water is now in the campground with logs floating down. You could see the water getting closer and closer and was moving very fast. Everyone has come out to watch the creek and report that places in Omeo are flooded and the rotunda in the park is all under water!
Next thing you know is that there is a loud crash and a huge tree log comes down and Kouta runs to investigate and goes up to the water edge and Neil and I are yelling at him to stop (as he is not too smart and is likely to get swept away!) I am running after him and he thinks the water is like the waves at the beach and starts playing with it I am watching as I catch up to him and I can see the creek getting wider and wider and the water is rushing up to him (meanwhile he is completely oblivous to it) and scoop him up and quickly get out of the way of the creek and all I can do is just growl at him and he thinks it is a game and runs around but I think he realised in the end that he had been naughty.
So that certainly added some interest to our rest day! When we finally settled down and looked at the campground and decided to move our tent ... just in case there was to be more rain later that night! But I pointed out to Neil just where the creek water was and we had to take a photo of it ... 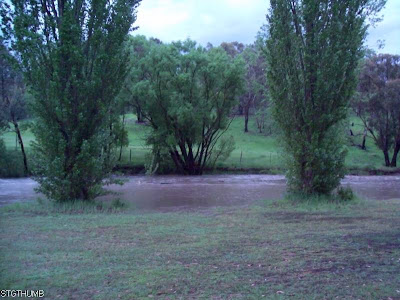 ... the spot between the 2 trees was going to be our original camping spot ... right in the water but at least 20m from the original creek! that is how far the creek expanded to!
Posted by Janet O'Brien at 9:22 AM