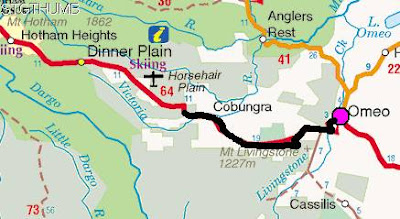 Based on last nights rains in Omeo and forecasted thunderstorms everywhere we had to make the decision as to whether or not to start making towards Mt Hotham, not really understanding the local weather patterns in and around Mt Hotham we decided that the day was too clear and sunny to stay at Omeo. So we decided to continue on and go as far as our legs could take us (knowing we were going into hilly country) or until when the weather begins to turn (like it did yesterday!)
So we begin to climb out of Omeo and we could see where basically the first hill was going to take us. Now since it was my idea to do this road I did take complete responsibility for the pain and suffering Neil and I were about to endure! We had looked at cycling profiles for this hill and thought the Omeo to Mt Hotham approach would be longer but a be rideable gradient with loaded bikes. The 2 profiles were used were from Bicycle Victoria and "cycling profiles". Now writing this 3 days later and poor Neil having to put up with me for the past 3 days harping on about this but could the Bicycle Victoria profile of Mt Hotham be in more inaccurate with its percentages for the gradients ... I admit the outline with ups and downs was pretty good but unfortunately the percentages give were just too averaged out! Unfortunately I think there averages were worked out on both ups and downs which gives a very inaccurate percentage of the hill to be climbed.
The first 3km was okay for a loaded bike but the next 3km we had to walk a bit as it was too steep (BV percentage given was 7.5% which is still rideable with a load - anymore and we would be struggling!) We knew this was the case as Cycling Profiles gave this part at 9% which is far more accurate and the first 3km more as 5.5% so when the 2 are averaged out .. there is your 7.5%.
But all in all what we thought would be the hardest part of the entire climb ended at Mt Kosciusko rest stop which is a lovely place to camp but at only 7km along it is not quite far enough of the 55km!!! below is a photo of the first hill climb - where the little white cloud is is more or less the top of the first climb. 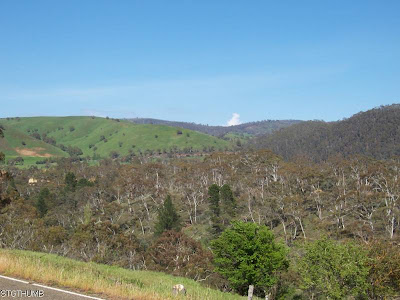 once at the top it is a drop back down and then you sort of undulate up and down a bit (more up!) to Cobungra or Victoria Falls which is about 22km along and what was meant to be our camp spot but you had to go a short way down to the river on a dirt road and with the clouds beginning to build we were unsure whether or not to stay there because if it rains we may get flooded again! So we decided that there was still one more climb at 6.5% and I would rather to that today or at least some of it. So it was decided to continue and if the clouds got thicker and heavier we would stop (at that point there was a bit of thunder but no rain just alot of build up!).
So we only got another 5km along and a little way up the hill which had a very steep start ... again at least 9% so we were legless by that stage and found it easier to walk it! 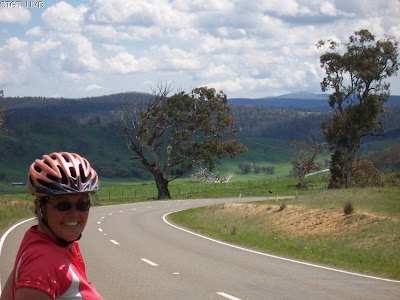 A photo of what was ahead!
By now the clouds where really thick and thunder was a constant sound so we pulled over to a camp spot that wasn't exactly scenic but served its purpose ... it was right smack alongside the
Alpine road! We quickly got the tent up and a few spots of rain and heaps of thunder eventually it was just all the noise of thunder and very little rain ... how lucky are we!!! 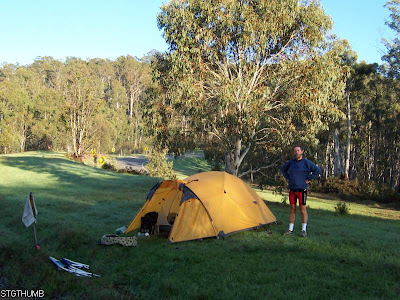 Our bush camp for the night (taken in the morning!)
So we didn't get very far but enough that we were at least half way along and according to the cycling profiles the gradients were easier ... yeah right!!!
Posted by Janet O'Brien at 9:41 AM