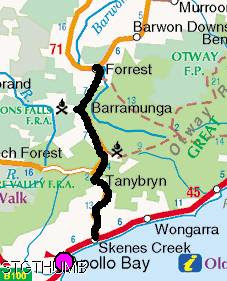 We are now along the Great Ocean Road and I think Neil and Kouta are extremely excited to be near the sea, last time we were near the sea was way back at Lakes Entrance, which was a looooooon time ago!
We woke this morning to the pitter patter of rain on the tent and I seriously thought that Neil would stay in Forrest but apparently not (personally I think he was eager to get to the ocean rather than stay in Forrest where it was raining and grey!). So we packed up the tent and headed off up the hills and every now and then it would begin to shower but it wasn't unpleasant to ride in it and I think Kouta didn't mind it either. We only had 30 odd kms to do today. We have travelled along this road quite a bit, in fact we have ridden it twice already going from skenes creek to forrest in previous tours but this time we went the opposite way (forrest to skenes creek) for the first time. So we were quite familiar with the road and hills.
Most of the first 20km was up and down to get up and then there is a huge down hill of around 10km to Skenes Creek. We took a rest break just before the down hill and Neil thought that the surrounds looked a bit like NZ (the Waitakeres to be exact) now he said it was because of the fernery but I think it was because it was raining (which is so NZ!) 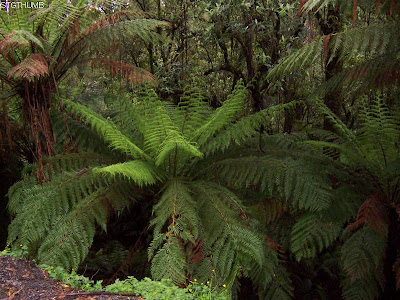 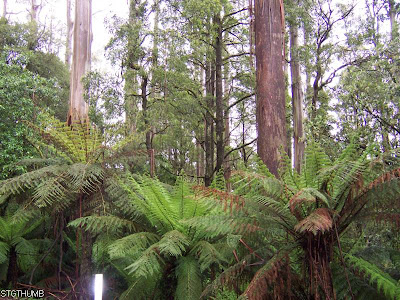 What do you think Sharon does it look like the Waitakeres?
On our way down hill to give the hands a bit of a break from squeezing the brake leavers Neil took this lovely photo of Apollo Bay ... 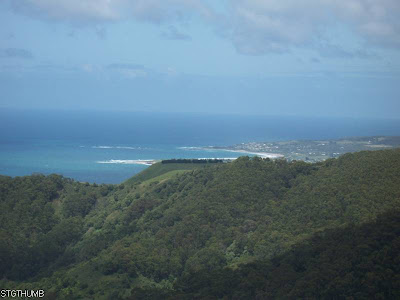 and then this not so lovely photo of me and Kouta! ... 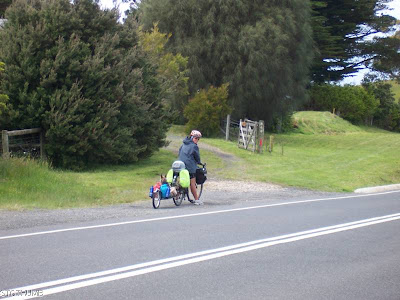 Skenes Creek campground is pretty basic and there are still a few schoolies here (I had forgotten about them and thought that it had ended, but apparently that could go on for a while!) So they are about 50m from our tent and group of them, they seem okay with the exception of 2 boys who turned up today (gossip has it in the camp kitchen that they are just here for the night and will be gone tomorrow!) well 1 of those boys is the type that you would like to put his head through a concrete wall (not that I am violent in any way!) but when they were kicking their soccer ball you could see that he was deliberately inching the ball towards our tent and when they finally got the tent they apologised but that still didn't stop Neil from threatening to kick their soccer ball into the sea!!! .... please note it was NEIL that spoke out not me (he got in before me!!!)
We have already visited the beach and Kouta quickly remembered that he likes the surf and was prancing around like a little puppy and even got adventurous in the deeper water. One time he took off by himself near some shallow rocks and was investigating and all of a sudden a wave came in and filled up the area and next thing you know he is swimming his way out of it!!! And he came out of it wagging his tail, running around, shaking all the water of himself, and sprinted up and down the beach drying to dry himself! He absolutely loved it, so tomorrow we may spend a lot of time on the beach just so Kouta can amuse us!!!
Only 130km to go until the end of this tour! should be home this weekend!
Posted by Janet O'Brien at 4:35 PM