A hot day today meant an early start to try and do most of the cycling in the morning. It was forecasted to reach in the mid 30's and I have to admit I think it was around that for sure!
Being a Sunday the road was very quiet and since cycling we have sort of lost track of the days and I was about to comment to Neil this morning as we rode through Corowa that this was a sleepy little ghost town and then I realised it was 8.30am on a Sunday morning!!!
It is a flat road and we had a slight tail wind so we cruised along at around 19.5km per hour and realised that we would get to Yarrawonga before lunch and not long after that we would get to the bush camp so Neil came up with a great idea and that was to find a town park at either Mulwala or Yarrawonga and use the free bbq's and power points and have an extended break while it is hot and move on to the bush camp later in the afternoon ... great idea I thought, so that really got my legs going!
The road passes through alot of wheat and lucerne country (I think) so when we came across a lone Kookaburra sitting on the power lines Neil just had to take a photo! 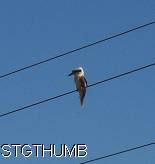 Travelling along quite nicely we touched the Murray river every now and then and then we followed Lake Mulwala (I have troubled pronouncing it!) which is a lovely setting. 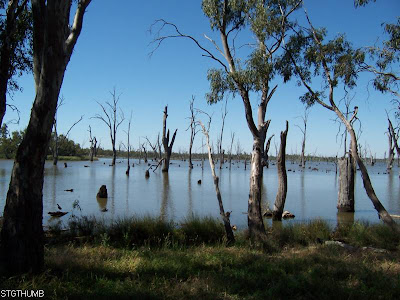 Just before we got to Mulwala we were cycling along and since I cycle in the front (Kouta demands that Neil cycles behind or else he throws himself around in the trailer!) I am suppose to be on Snake watch (a duty I loath with a passion!) and I do concentrate especially on the left hand side of us but I was admiring the scenery too much and didn't see a snake in the middle of the road (it was to my right) and Neil yells out about the snake and so I begin to panic and wobble a bit and I am scanning around everywhere trying to find this snake yelling at Neil as to where it is and he's yelling didn't I see it and I'm yelling that I can't see it and finally I pull over fuming that he has scared the absolute crap out of me! Apparently it was in the middle of the road and took off to the right side of the road and into the grass. It gave me a hell of a fright as I didn't know where it was and I couldn't figure out what Neil was doing. So the rule is now that Neil looks out on the right and I look out on the left as when I scan left and right up front I miss out on all the scenery!!!
We arrived in Mulwala at around 11.30am and are sitting on the lakes edge under a lovely shade cloth with the cool lake breeze blowing on us ... lovely!
We are having Rissoles for lunch and I am about to ring NZ to take advantage of the free power!!! 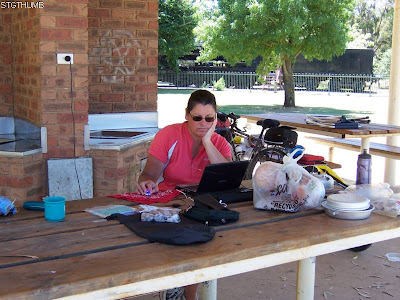 Will stay here until around 4pm and then continue for another 10km to a designated bush camp along the murray river.
Posted by Janet O'Brien at 12:53 PM