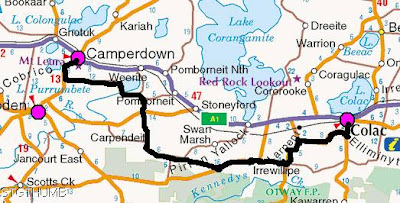 Here we are at Hotel Jones were the facilities are pretty good!
As you can see we came through the back roads from Camperdown to Colac, if we had taken the main highway it would have been 20km less! But riding along the A1 is pretty horrendous cycling even if you do have a wide shoulder as that is usually full of crap from the road and also very rough to ride in. So with a map that has the small road names we criss crossed our way across the country side. We had been on a few of the roads before (around Carpendiet) back in March 07 when Dad came with us.
By riding on the back roads we were able to see alot more like Lake Purrumbete and Neil took a particular interest in the stone walls around the various farms at Stonyford. 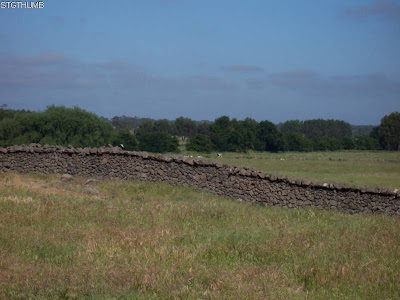 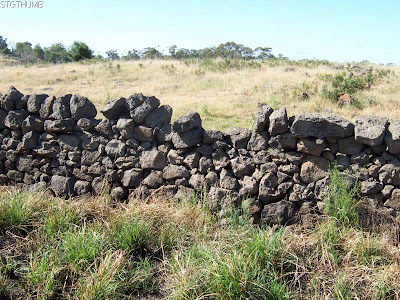 Alot of work has gone into these walls and they really are like one big jigsaw puzzle and they are done by hand which would have been absolutely laborious work!
There was next to no wind so we were cycling along quite nicely and took a quick break at the Bungador CFA shed. 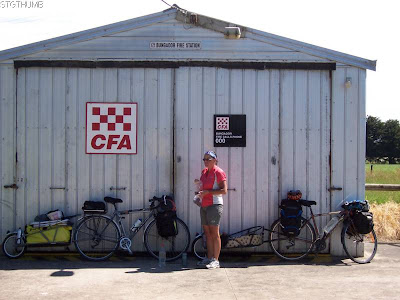 From there we decided to take a minor unsealed road (7km long) and it turned out to be not a bad road after all (as you may have read we have been on SEALED roads that were in worse condition than this unsealed road!). In fact riding along it was really nice as it was in shade a fair bit. And off course we just had to come across another snake didn't we! There was just a small crest to climb and the road became slightly bumpy with larger stones on the side and since we were riding together we were making a hell of a racket and causing alot of vibrations so just out of the corner of my eye I saw about 30cm of the tail end of a black snake so I couldn't tell you how big it was. And I assume it must have felt the vibrations we were creating and thought better to wiggle away rather than try and take us on!
We got to Colac just after 1pm and Kouta quickly realised where we were and was happy as larry when he got settled in.
We will stay here until Sunday and then we head for the Great Ocean Road and we realise that the Victorian Bike Ride will be going through next week but we will be a day or 2 ahead of them. I don't particularly want to be around 5000 cyclists!!!

Arriving at Hotel Jones!
Posted by Janet O'Brien at 11:22 AM