Oh it was sad to leave little Dunkeld ... I think if it had a little supermarket I would have liked to have lived there and I think if it had a bigger population that played table tennis I think Neil would have also like to have lived there!
And now we are in a place called Lake Bolac, when I first saw it on the map I thought it was a place that I would like to see and stay in ... well I have been here a few hours and tomorrow morning cannot come quick enough! What an absolute dump this is and after coming from Dunkeld which really only has the Grampians to survive on and where there seemed so much pride in what they have and created there (they also had a nice walk through an aborteum and lake) and with the community campground that is looked after by the town committee of which quite a few popped into the campground to talk to everyone and then we come here to Lake Bolac which has a huge lake (a bit like Lake Colac!) and although there is not alot of water (but there is more now than what there was last year) and it used to be a hive for boating and aquatic sports etc. I don't know what has happened to the surrounding area but I think the so called foreshore committee should be sacked or shot (preferably the latter!) as they have let the foreshore campground go to 'the dogs' it is one disgusting place to pitch a tent ... passable if it is free but it is not, it is $10 to stay, which is not worth it at all as the toilets reak of urine and the area is very unkept, maybe the foreshore committee should take a leaf out of the town committee from Dunkeld and show a little pride in their surrounds!
Not far from the so called foreshore campground there is the local caravan park which is only marginally better than the foreshore campground ... yes I am not being very kind to Lake Bolac but you only have to visit here to see that they just haven't bothered with anything to promote the lake in such difficult times, I suppose due to the lack of water in the lake there maybe a decrease in the amount of people visiting due to low water levels but that is no reason to let town facilities go downhill, now I wonder how many people bypass Lake Bolac not because of low water but because everything is so run down?
And another thing what is it with the damn road repairs? I have mentioned this before and the only road across to Lake Bolac was the Glenelg highway and it was resonably busy with trucks and I mean huge trucks carrying livestock and double trailer trucks and look at the photo below to see just how well they repair roads and what happens when they do a crap job. 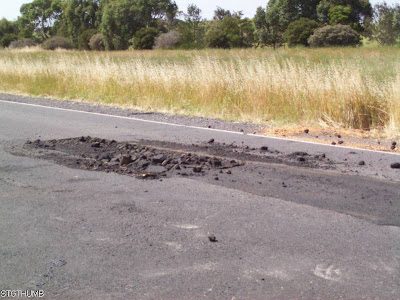 this repair was down quite recently as you can tell and there was huge chunks all over the road even on our side of the road.
Okay one more thing and then I am finished - today I think we realised just why there are so many country fatalites, the stupid things locals do (you can tell they are locals by what they drive) and the risks they take or maybe they take it for granted and think they are immune from causing or being in accidents because they know the roads so well ... well let me tell you they may know the roads and can drive the roads with their eyes shut but unfortunately they don't know what everyone is doing, or that there are people also driving on the other side of the road as well! Quite a few times today we had locals overtake us and gave us plenty of room when overtaking us but they sort disregarded that there we cars and trucks coming the other way! In one instance the car did it on a wide blind corner and I was at the top end of it and could see that there was a good chance that me, the stupid local overtaking me and a semi trailer truck coming the opposite way were going to meet in a row! but I was fine as I had plenty of room but the car would have gone smack into the front of the truck had it been 5 seconds later! what an idiot! Another one today overtook us on a straight road and gave us plenty of room but misjudge it completely and the car coming the other way had to go half of the road but funny enough the car doing the overtaking didn't slow down when he saw the car going off the road, instead he just continued overtaking us even though the car half of the road had the right of way .... STUPID is all I can say with some drivers.
Well I have finished my ranting and raving for today! it was just that today there was alot of stupid drivers and the highway which has alot of trucks was in need of a repair or a complete resurface rather than patchy repairs.
Tomorrow we head for Mortlake or Terang, Mortlake if the winds are in front or Terang if they are behind us, it is forecasted to be a tailwind for us tomorrow ... but the weather forecast is also another issue with me!!!! (and I think with everyone else really!)
Posted by Janet O'Brien at 3:42 PM