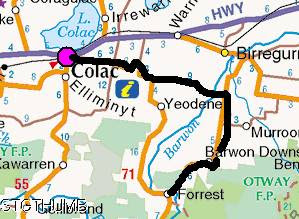 We bid Neils parents a bon voyage and also farewell to a bed, fabulous food, lots of cake and the use of a real towel!!!
We took the back roads as per usual to get to Forrest. Neil wanted to ride through Barwon Downs which is an old saw milling town in the Otways. He lived there for the first 14 years of his life and has very fond childhood memories of the place.
As we pulled up at the town hall there was 2 old men standing outside and they said there was a town gathering for a xmas party and believe it or not they didn't know us from a bar of soap and they invited us in to join them, although it hadn't quite started but being the food hound I am I could smell the meat in the spit and I could definitely see all the lovely food on the table! But we declined to join them but Neil being the chatterboxer he is starts to talk and mentions that he was born here in Barwon Downs and the 2 old men introduce themselves and when Neil said his surname they knew instantly whose son he was ... "ah your Ray Jones' son ..." We can't quite remember their names but the said they see Ray sometimes in Colac ... so be aware Ray a farmer from Barwon Downs and another person who belongs to the Forrest Lions Club will mention they saw us!
The man from Forrest also mentioned that there was a 24 hour mountain bike endurance event and there was a few roads closed but said that we should be able to slip through as long as we watched out for when the tracks crossed the road as some of the bikers will be speeding down! At one point there was quite a few cyclists crossing so we stopped to watch - there are some crazy people out there! - imagine doing mountain biking (actually anything really) for 24 hours straight! Aparently there were 800 competitors and 150 of them were solo and so were doing the 24 hours on their own and the rest did it in teams or relays! My hat goes off to the soloists!
Riding along though I couldn't get the generosity from the 2 Barwon Downs men out of my head and said to Neil I would love to live in a town like Barwon Downs where they have these community events!
We made it to Forrest just on 1pm and there are not too many people here at the campground and we think it is just us camping. There is no internet reception and we doubt we will get it tomorrow at Skenes Creek.
Kouta has got a new basket that we are trying out for the last leg of our journey. It is smaller and we can now put the inner and outer tent behind his basket, he sits very comfortably in it and is a good size for him to sit in, however it is a bit small for him to sleep in and at the moment he is in the tent with us and he can't quite stretch out and if he does he sort of has to hang out over the edges, but he looks comfortable enough and if he wasn't he would not be sleeping in it!
Below is a photo of Kouta and his encounter with some wildlife we weren't expecting! we are not sure if they are llamas or alpacahs, but they all came running over to Kouta and would have actually come right up and sniffed him if it wasn't for their electric fence. 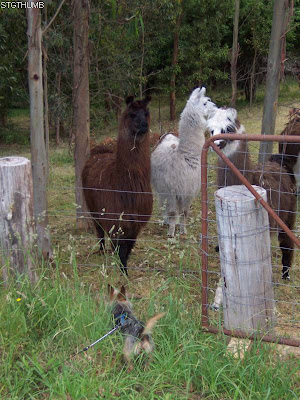 Tomorrow is Skenes Creek and I have been telling Kouta that he gets to play in the waves again ... he just wags his tail and really has no idea what I am saying!
Posted by Janet O'Brien at 4:27 PM