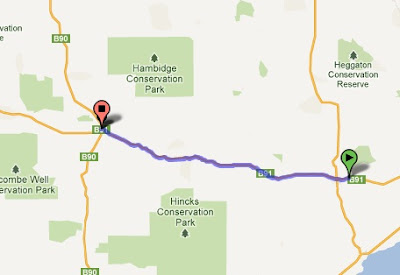 YELDULKNIE WEIR TO LOCK = 80km
CUMMULATIVE TOTAL = 1089km
LOCK CARAVAN PARK = $20 (powered) $12 (unpowered)
We had a rest day at Yeldulknie Weir ... that means my last shower was on Sunday afternoon and it is now Wednesday afternoon :) ... it felt good to get a hot shower at  -Lock.  Here are some photos from Yeldulknie Weir ...
neil on the wall -﻿ 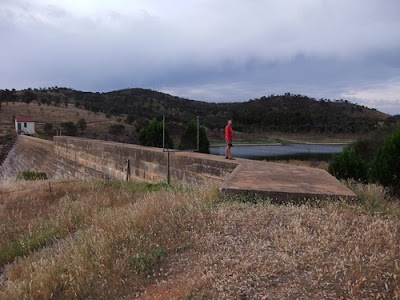 as you can see there is not alot of water in it, I don't think it is still used by it use to supply Arno Bay with water - 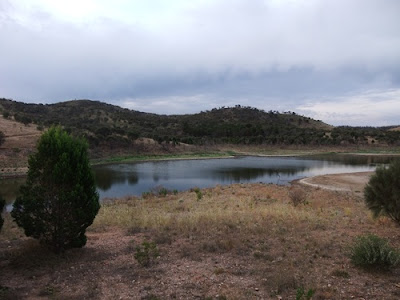 Our camp spot amongst the shade of the trees - 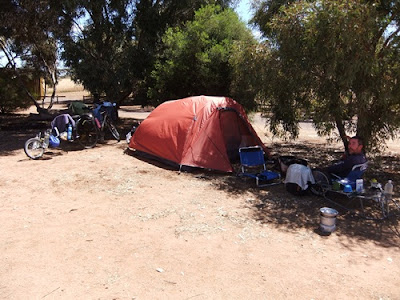 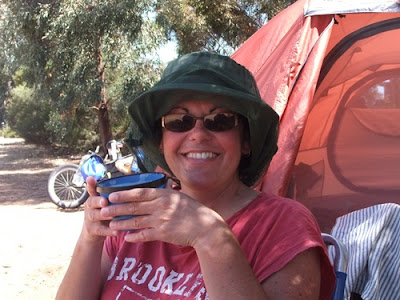 It was a good rest day and we needed it. So today we tried to get up early as we knew we were going to have a long day and although they forecasted it to be east-south-east winds which is a tailwind to us I always believe that you should alsways listen to the weather report with a grain of salt ... in other words (like Dad says) 'expect the worst and you won't be disappointed' LOL
We did managed to leave by 8.30am and by then the wind was blowing from the East and woop peeeee we had a good tailwind.  We stopped in Cleve to go to the bank and continued on - as you can see it was a gradual downhill to Rudall so the average at that point was around 20km per hour (at this rate we would get to Lock in 4 hours!)
From Rudall it flattens out and the wind still is blowing behind us and I cannot believe our luck with this.  It is very dry over here but the crops are growing - the canola fields have been cut and are in their wind channels drying out even more and will soon be processed.  The grain fields are turning yellow and the small towns are getting ready for the harvest possibly within the month I think ... hence why there is no real traffic on the roads but come harvest time the roads will be chockers with grain trucks I think ... we should be gone by then!  So here is the typical view for today ...﻿ 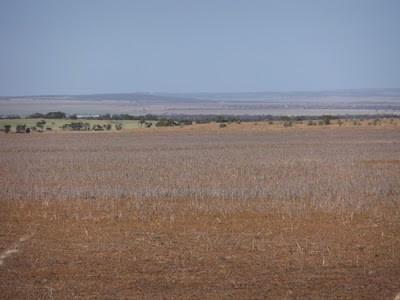 Didn't see any snakes today but a few and various lizards - Neil stopped to take a photo of one ... 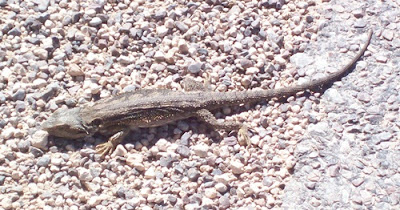 Still the wind is blowing behind us and we were still riding along at about 20-22km per hour and by the last 10km the legs felt like they hadn't cycled but there was a gradual rise coming into Lock and the legs sort of felt it then!  Lock is a grain town and doesn't consist of much - the campground is overpriced at $22 for a powered site (they charged us $20 since we don't have a caravan!) or $12 for powered (which is reasonable for unpowered) the town as an IGA, post office and pub and that is about it - lots of big silos for grain.
Here is our tent spot amongst the trees for shelter - about 23 degrees today but tomorrow I think it will be warmer at around 30 degrees.﻿ 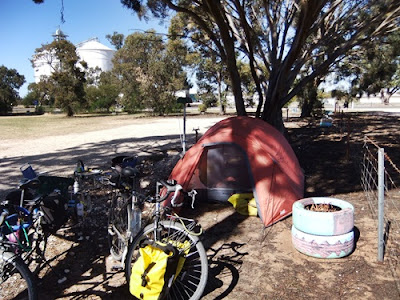