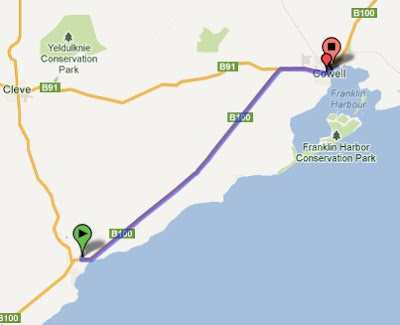 ARNO BAY TO COWELL = 47km
CUMMULATIVE TOTAL = 1539km
COWELL FORESHORE CARAVAN PARK = $20 powered (they gave it to us at this cheap rate knowing we only use it for the computer!)
It was a relatively short day today but we had to get up early so that we got to the Cowell IGA before it closes (at 12 midday!) and tomorrow it only opens between 10am and midday :)
After I wrote last nights blog we went for a stroll along the esplanade type area of Arno Bay - it was still very windy ...
this the view from the shore looking out - you can see small rings this is where they farm the tuna - a full enclosure - this was the closest one to shore the rest were way out to sea but you could make them out and some were close together and a ship was amongst them ... maybe harvesting them? 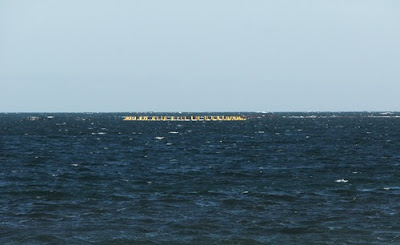 this is the view looking south ... 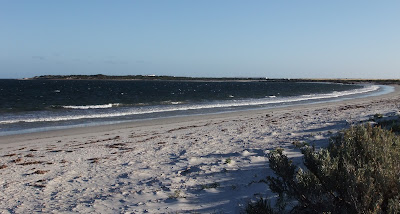 This is the view of the bay looking north ...﻿ 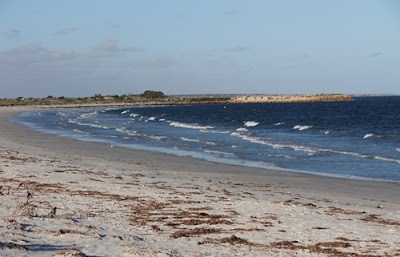 and this is the causeway that you cross when you go towards the campground ... this causeway sort of seperates the small township of Arno Bay from the tourist and holiday makers ...﻿ 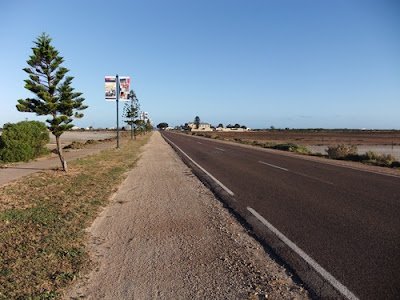 ﻿
﻿It is a nice enough campground - very crowded thou but friendly ... we have noticed that since we have been at Coffin Bay every caravaner wants to chat to us and actually really see that we are carrying a dog ... all the way over here no one batted an eyelid about us and the dog ... but since Coffin Bay we have been the talk of the coastline!
So onto todays riding - well we expected a strong south south easterly wind to blow us into Cowell instead we get very little wind and what wind is blowing is coming more from a east south easterly so it was a cross wind for the bulk of the ride.
The profile is bit of a misrepresentation of today - you definitely felt the long ever so gradual climb but there was definitely no down hill like the profile suggests.  I assume we didn't feel the slight downhill was because of the state of the road ... in fact this number 100 highway around the Eyre Peninsula is nowhere as good as the Birdseye across from Cowell to Elliston.  This 100 highway looks fantastic but in actual fact it is a drag for cycling.  The surface is chunky and bumpy and drops you a couple of km's per hour, it is a bit like going on a dirt road with all the uneveness ... a shame really as all it needed was a little more tar added to the road when they laid the stones on it!
Anyway across that causeway this morning at 7.30am Neil found a $10 note!!! I tell you he is like a hawk when it comes to finding stuff alongside the road ... me all I see is old newspapers and toilet paper!  Neil says I have no peripheral which is probably true due to not being able to see out of the sides of the glasses ... I will try that as my excuse from now on.
So Neil was happy as larry and then when we get to where we join the highway he finds a frisbee (a good one to) I did see that but ignored it but he picked it up to add to the one we already are carrying with us and haven't used (as it has been too windy) ... he says he will clean it and give it to Sharon ... I say I betcha she doesn't take it and tries to 'fob' it off on Caleb because it is used!!!
On our way to Cowell we both saw a very good pair of sunnies so Neil picked them up and they are in very good condition just one of the nose pieces is missing but that doesn't matter - they are a pair of Bolle sunnies!
Anyway despite the poor road conditions and the very unhelpful wind we made good time into Cowell around 10.50am.  As we were coming in we saw the charity ride group that is doing the 1000km to Adelaide and they waved to us so we waved back ... at least I did as Neil had been diverted by something shiny alongside the road!
We got to the campground and she gave us a slightly lower rate than normal for a powered site as we don't use much power on for the computers and a night light and since it is daylight savings it is only one for 30 mins before we fall asleep!
It is just like the Harbourview caravan park that we stayed in before (this is the place that the ferry leaves from) very dry and gravelly but at least it is structured and shady, so we are camped on gravel - very comfy!
We will stay here tomorrow and catch the 11am ferry on Monday - tomorrows (Sunday) ferry leaves here at 2.30pm which arrives at Wallaroo at 4.30pm and it is a little late getting down to Moonta another 16km from Wallaroo ... we could stay at Wallaroo but I think Cowell is nicer.
Neil with is daily 'hoard' ... 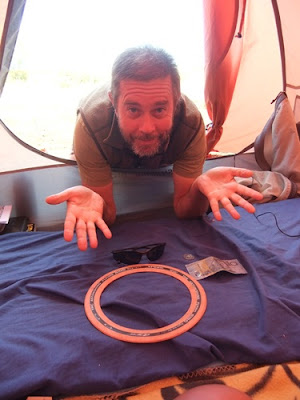 and our campsite - the water is a fair way from us but infront is just mangrove and I don't think the tide comes up to there! 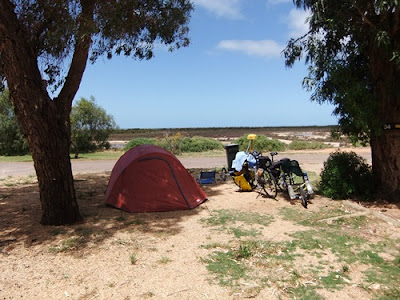