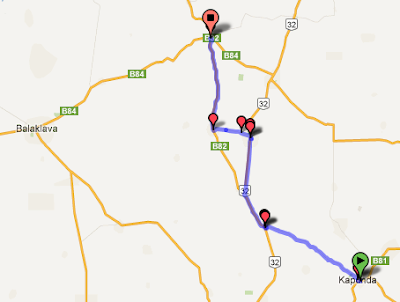 KAPUNDA TO AUBURN (via the Rattler rail trail) = 50km
CUMMULATIVE TOTAL = 822km
AUBURN CARAVAN PARK = $22 (powered)
Hi De Hi campers ... our temperature has dropped dramatically since lunchtime and we only just managed to get to the campground for it started to rain.  But first let me show you some mine photos from Kapunda - we had a rest day yesterday and took Kouta to the vet to get his Prednisolone tablets for when he scratches too much and I tell you he was not a happy chappy being there!  We did manage to weigh him and he is 6.5km ... the little fatty! actually the vet said he is a healthy weight size.
Kapunda was the first mining town in Australia and I think it was for copper as well as other metals ... all that remains are a few holes and a chimney stack ... 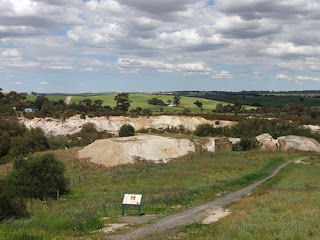 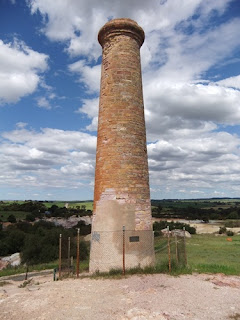 ﻿It is a nice enough town and has an IGA and Foodworks but the Foodworks is the cheaper and bigger of the 2.
So today they had forecasted showers and very cold winds and when we woke this morning there was no wind and it was quite mild!  So we headed off on the quiet road that goes to Tarlee and it is a gentle 8km climb to get out of Kapunda and then a nice 8km down hill into Tarlee.  From there we jump on to a rather busy highway to Riverton.  The highway has a shoulder which is surprising ridable although narrow and I was buffeted by strong side winds and Koutas movement so I struggled to keep within the shoulder.
We had a cuppa at Riverton which is a quiet and somewhat bigger town than what we thought - it had an IGA and campground.  From here we were going to join the Riesling Railtrail that goes from Clare (further north) to Riverton (the trail from Riverton to Auburn is known as the Rattlers rail trail)  the rail trail also is part of the Mawson trail.  The start of this trail is not well signposted (which is the case for most rail trails anywhere!) and it starts just north of town 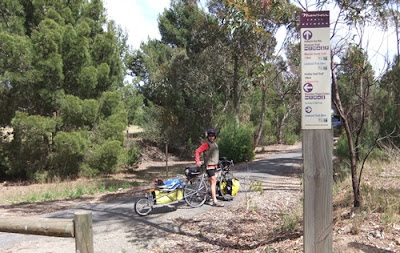 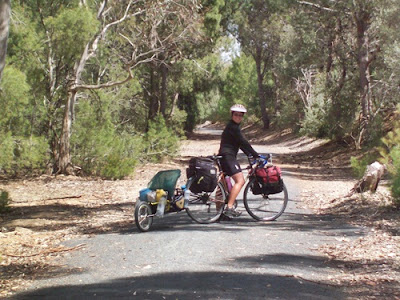 at the start of the path in these photos you are most probably looking at the path and thinking that is a lovely path to ride on ... well don't be drawn into this false sense of security because the next photos will definitely change your minds ... 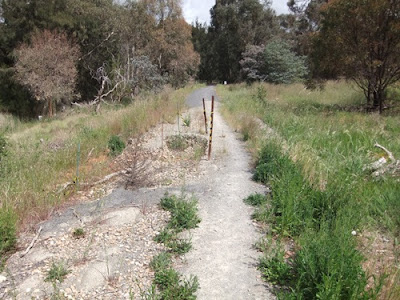 this one had a fair bit of rain damage to it (from 2 years ago and they still haven't repaired it!) and to the left of the path there is a huge hole ...﻿ 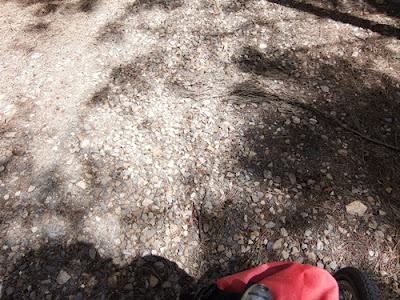 ﻿
﻿
then as you go further the trail goes into something like a damn dry river bed that was soft and had huge stones in it ... we couldn't ride in it so we decided to go back to the small road that goes to Rhynie and somewhere along that road (about 3km further along) you see the rail trail cross over and you can rejoin it there ... so that is what we did.
The rail trail is better from here - although there is some damage to the path it is still rideable.  You go through pastural land of grain, canola and also sheep and cattle and occassionally the farmer has left the fence up blocking the path from where their cattle or sheep have gone through.  At one poin the farmer has blocked the path completely with a flimsy wire fence and so you have to go around the fence post.  Otherwise the path is good and it follows the road that leads into Auburn. 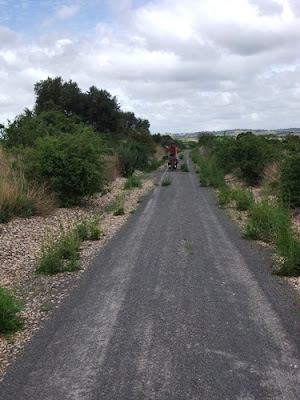 as you can see that path isn't too bad.  At about 8.5km from Auburn the wind really picked up and you could see to our left heavy black clouds (what they had forecasted) and then whoosh all of a sudden you are hit with 30km per hour winds and not just cold winds but winds with a chill to them so there was a scramble to get our gortex out and on!  There was another elderly couple on the path (they had ridden down to Rhynie and back) and they were struggling with the strong winds too.
So it was a race to get to the campground before the showers/rain set in ... we made it just in time as the caravan park is at the end of the trail - it started to rain just as we went through the gates.  The park is in the recreational grounds and the caretaker and his wife was most helpful.  Not alot of powered sites and she suggested we camp on the football field and store all our stuff up in the stands and that will protect us from the wind and rain and they gave us a long extension cord for power via some shed (such a nice thing to do!) ... she was right for then it just bucketed down while we sat in the stands having a cuppa, when a break came we hastily put up the tent.
The facilities are fab here, a camp kitchen (our first since Wedderburn!) and the showers are very modern and clean.  A well cared for caravan park and well worth the $22 :)
At the moment I think it is around 8 degrees but it is nice in the tent.  Every now and then the wind picks up and it rains and then stops ... but it is cold!
Tomorrow we are off to Port Wakefield and another cold day forecasted ... I wonder when I am going to get these so called 'hot' day Neil said I would get ... so far we have had .... one!﻿
﻿
Posted by Janet O'Brien at 4:16 PM