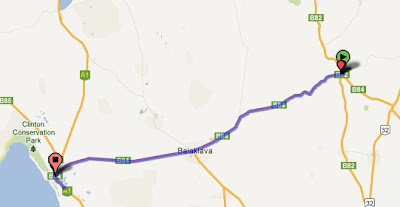 AUBURN TO PORT WAKEFIELD = 58km
CUMMULATIVE TOTAL = 880km
PORT WAKEFIELD CARAVAN PARK = $17 (unpowered)
Another very cold night (although not as cold as the previous night!)  We woke to cloudy and windy cold day but no rain forecasted.
While packing up we had a visit from one of the local cats, off which Kouta really wanted to be friends with (like with most cats he has no idea what they are all he knows is that they are animals and he would like to be friends with them!) but this cat had no intention of being friends with Kouta and as Kouta approached the cat certainly let out a long angry hisssssssssssssssssssss at Kouta!  So Kouta was content just to stare and stalk the cat who in the  photo below had just finished stalking a willy wagtail bird ... from my perspective it was hilarious to watch ... Kouta watching the cat, the cat watching the bird and the bird just prancing about completely oblivious to what is going on around it! 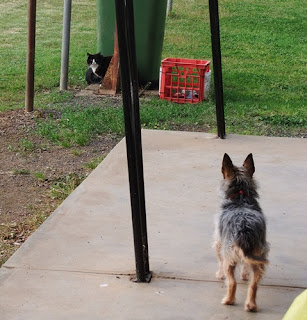 After signing the guest book we managed to leave around 8.30am.  It was a short climb to the top of the range and as you can see from the profile it was downhill from there ... basically it was downhill until you got to Halbury which is about 17km along the B84 highway (which is quite good!).  You get quite nice views of the plains ahead as you come down the hill ... 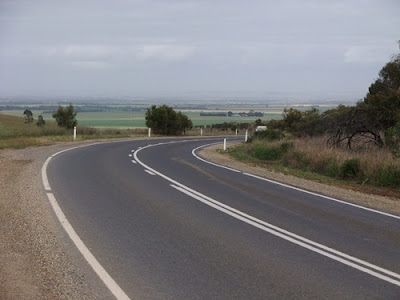 From Halbury it is basically flat to Balaklava which is a nice town and we picked up supplies from here.  It is Friday and obviously it is shopping day for every old person in the district.  Waiting outside for Neil it is a very chully wind a blowing and the amount of old ladies that came up to me saying the Kouta must be cold as he is shaking (one even offered a blanket for him - not me, as I was shaking, but him!) I said that he is not really cold and he has a jacket he just shakes all the time ... I didn't have the heart to tell the ole dears that that is what normally happens in old age - you start shaking uncontrollably !!!! ha ha ha LOL
We finally left Balaklava with tonights dinner (nachos) and of course Neil couldn't go past the mark downs - yoghurt (which we don't need), custard (which we don't need) and a 250gram block of light cheese - which I have to say is markdown of the trip so far!
From Balaklava it is 25km to Port Wakefield and it is a flat road, in fact it is dead straight for half of it and then it curves towards the south a bit.  It is just as well we didn't ride yesterday as this part from Balaklava to Port Wakefield would have been a killer with thos 40km per hour south westerly winds as we would have been riding straight into it and to make matters worse it was wide open plains so we would have been exposed to it all!  The sheltering trees/shrubs are on the right side of the road (going to port wakefield) and there was nothing on our left to shelter us from any wind!
We made it to Port Wakefield which is on the main highway A1, but the campground is off it and towards the water (not that you can see any!)  It is a campground that has alot of holiday vans in it which are empty at the moment and we are in unpowered and shoved to the back of the park, we are the only ones we think so it is very quiet - not sure if people will arrive tonight to their batches as it is the weekend. 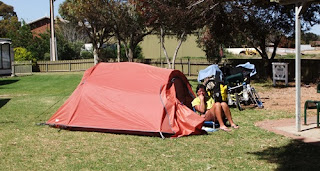 Neil went for a walk to see if he could find the ocean (him and 'seeing' the ocean!) and found the estuary and jetty 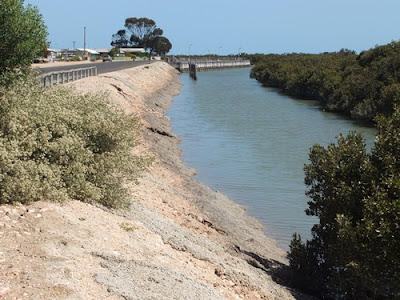 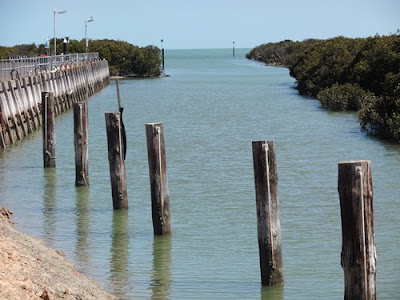 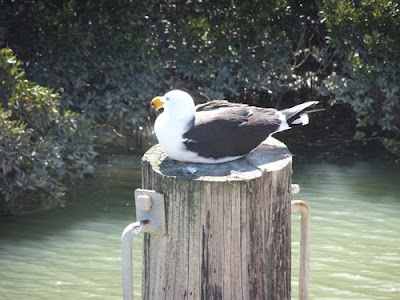 will go for a walk after dinner to have a look - tomorrow we are off to Wallaroo and at Kadina (about 6km from Wallaroo there is a Woolworths ... we are sooooooooooooooo excited about that ... may even take a photo of it!﻿