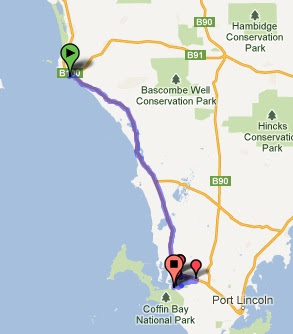 ELLISTON TO CUMMINGS REST AREA = 60km
CUMMINGS REST AREA TO COFFIN BAY = 82km
CUMMULATIVE TOTAL = 1323km
COFFIN BAY CARAVAN PARK = $32 (powered)
It has been a tough 2 days for us and it is very late so I am going to bombard you with photos with a brief explanation for each!
Rest Day @ Elliston = Waterloo bay﻿ 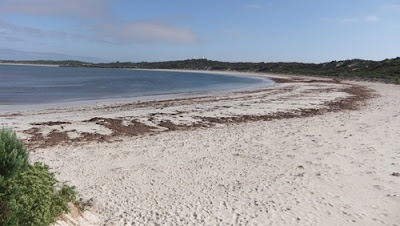 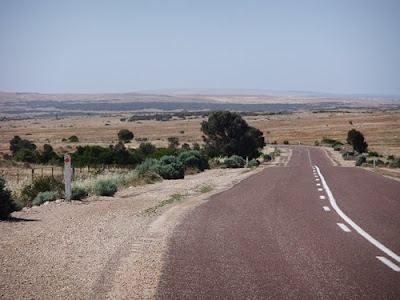 Just before Sheringa we came across this sign and the photo of the road to Nowhere is below it! 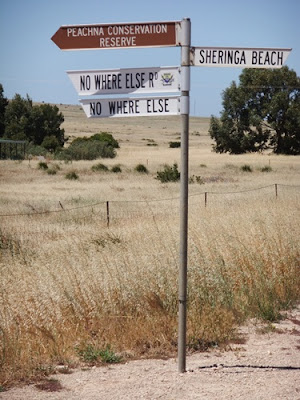 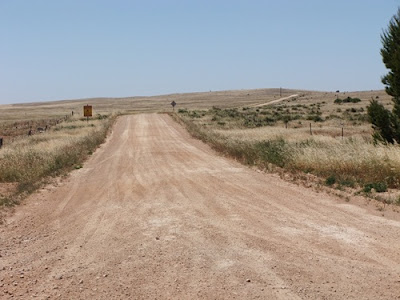 ﻿
Very slow going with such strong winds - the road is very much out in the open so any wind except for a tailwind would tough going ... just before the rest area is this historic building 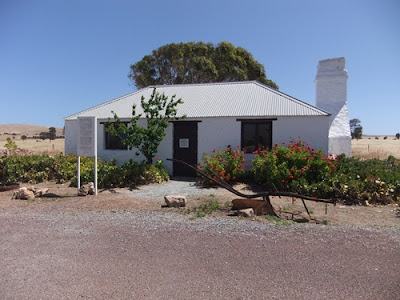 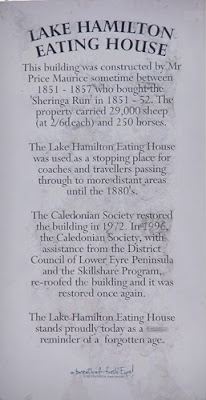 Extremely glad to get to the rest area - nowhere to came before hand and if it wasn't for such a strong wind I would have liked to have done a few more kms - but for the previous 10km before it I was down to 10km per hour and that is just ridiculous - it was even getting to the point that I went up a slight undulation rise at 10km per hour and believe it or not actually went slower than that on its' downhill due to the very strong winds ... I gave up on this day !  Our bush camp 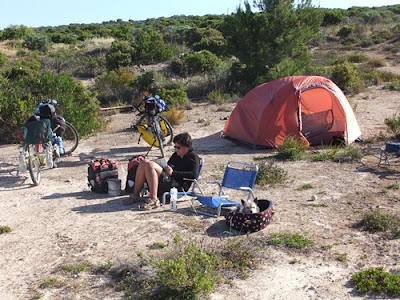 and we had a lovely view 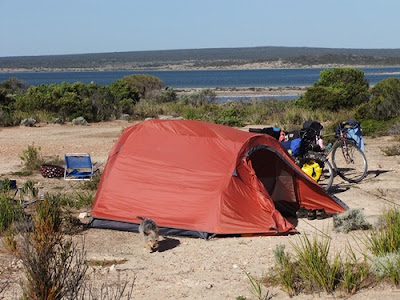 woke in the morning determined to have a better day and actually tackled the ride to the lookout - it said 500m but it was more like 1km!  Great view though 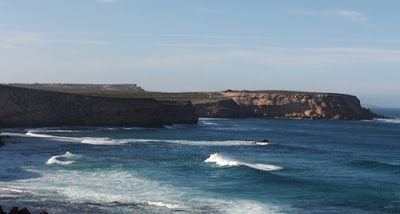 all the weather reports said today was to be a north easterly so technically that should be a tail cross wind for us - it wasn't it was more an easterly so we had head cross winds until Mount Hope then basically cross headwinds to Couta. Got a nice photo of the Marble ranges which we ride alongside ...﻿ 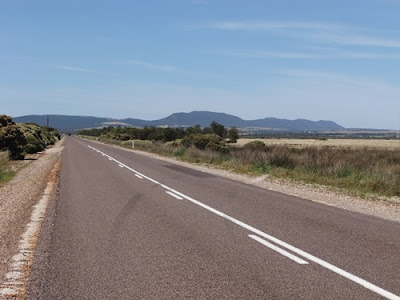 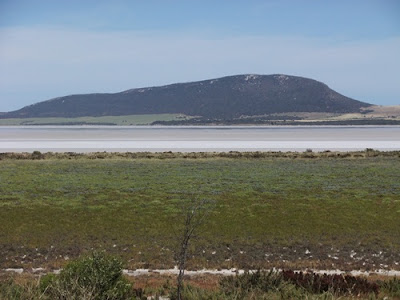 ﻿
had our lunch break at Coulta where Kouta passed out under the pine trees ... 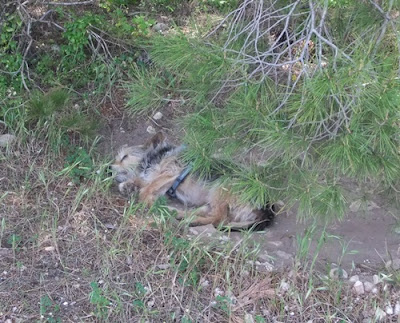 ﻿
and here is Neil enjoying his cuppa ... 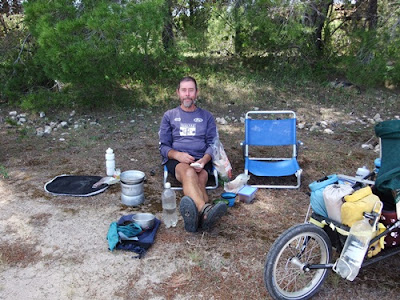 found where we sat we were constantly getting pine pieces dropped on us ... a bird was eating the pines and dropping them once they had finished ...﻿ 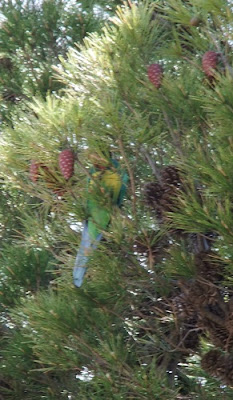 From Coulta it is predominantly down hill and you go down a valley and for this part we had a tailwind, once at Wangary the road veers east and so we had our head wind again but saw that the 5km dirt road to Coffin Bay via the Kellidie Bay conservation park was good so we took that as it would save us 12km 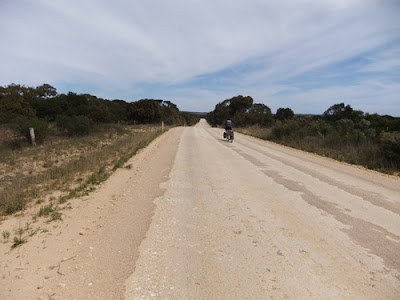 ﻿
relieved to get here - bigger than what I thought and full of huge holiday homes that are for rent or are empty.  Caravan park has immaculate facilities with camp kitchen but the price is very expensive and all the oldies are complaining like mad because some of the sites are not level and they have to spend time levelling their vans etc.  I think it is expensive but the facilities are fabulous and I certainly used the camp kitchen!
The park is next to a conservation park and kangaroos come into the camp ground - Kouta loved that and they come quite close to graze but not close enough to you for a pat.
Kouta watching carefully ... 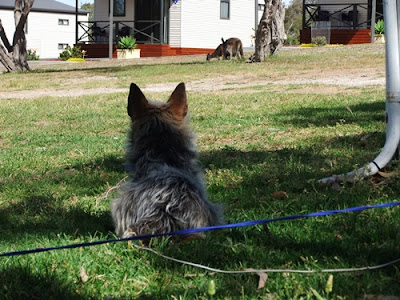 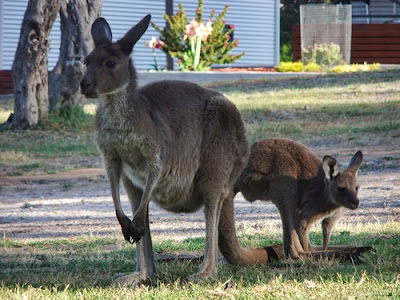 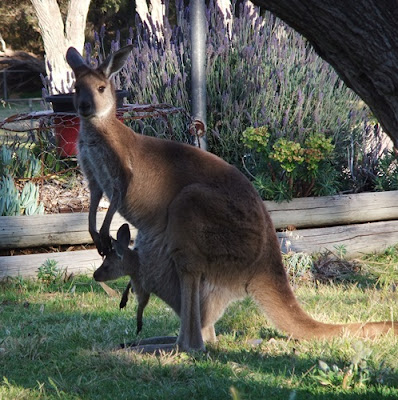 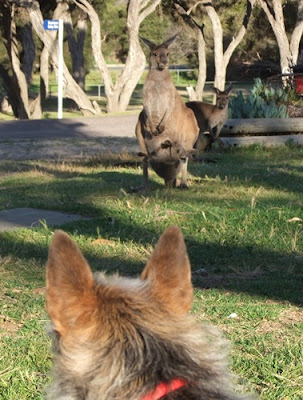 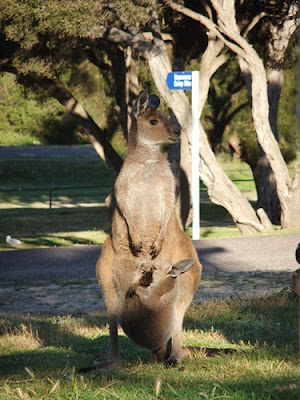 Went for a quick walk along the Oystyr bay walk and it follows the edge of the bay and on one side you have the water and on the other is someones yard ... just before you get to the marina area you actually walk alongside someones house ... I am not kidding they have their kitchen wall right on the border with the path that you can look in and see and at one point I actually thought we were on their veranda ... it was unbelievable. 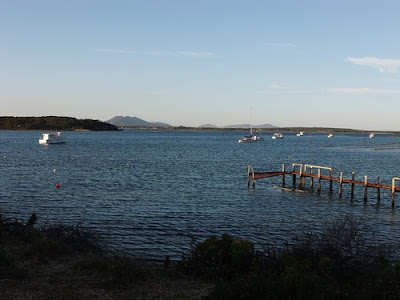 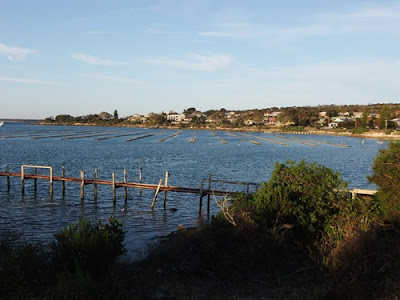 tomorrow another headwind forecasted ... of to Port Lincoln to pick up food supplies and then on to North Shields a further 10km north as Port Lincoln doesn't take dogs.﻿
﻿
Posted by Janet O'Brien at 9:18 PM