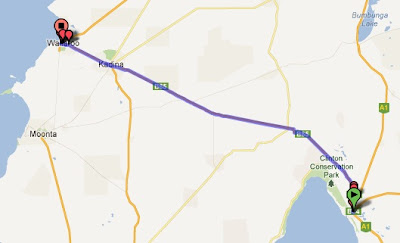 PORT WAKEFIELD TO WALLAROO = 67km
CUMMULATIVE TOTAL = 957km
NORTH BEACH CARAVAN PARK = $22.50 (with discount) unpowered
As you can see from the map we crossed the top of the Yorke Peninsula and are here at Wallaroo, we are hoping to take the ferry tomorrow to Lucky Bay on the Eyre Peninsula.  Unfortunately Neil forgot to find out where exactly on the Ferry the dog has to go - generally they stay in the car but whether they will accept him staying in the trailer where all the cars go and us staying with him we don't know and can't find out as the ticketing doesn't open until 1 hour before departure.  Departure is at 12 midday on Sunday so we will go there at 11am and if we can't stay with him then we will probably continue on around the Yorke Peninsula and skip the Eyre Peninsula.
There was hardly a breathe of wind today so cycling was a little easier for the bulk of the day - if anything there was an ever so gentle easterly pushing us along but not up the first hill just before Kulpara - it was a munter of a sooty grunter!﻿ 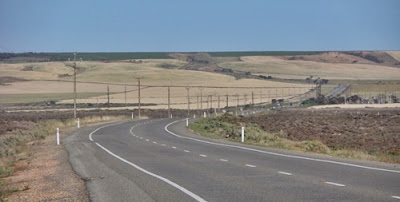 The range is innocent enough but the choice of where the road should go is not as they always find the steepest part of the hill and build the road up that!
The view about 2/3 of the way up is good but nowhere to stop along the side of the road so we waited until we got to the top ...

As you can see this is the top of the Gulf of Vincent and after waundering around Port Wakefield las night it tends to be mangroves and tidal.  I tell you Port Wakefield has 2 faces - the first near the caravan park which is the old part and is full of batches worse than what we had on Waiheke!  They are a miss match of tin, asbestos sheets and are about 1cm apart from each other.  I tell you bits and pieces are just tacked on to make another room, or the garage is converted into some sort of living space ... it was unreal and then this morning as we came along the A1 on the left are huge new housing developments!  The town on the main highway has 4 gas stations - 3 going to Adelaide and 1 going north, it also has 3 bakeries/cafes ... it is unbelievable!
So once you go up the 5km hill before Kulpara you have a nice gentle 5km downhill and then it undulates a bit but mainly in a downhill direction so the going was easy - at times we were on our biggest chain ring comfortably (must be getting stronger)
At Paskeville we had a cuppa and then continued on to Kadina where we picked up alot of supplies and then onto Wallaroo which is a further 8km on.
The road along here is fabulous from Port Wakefield to Kulpara and then it ends - it becomes a narrow road with not much shoulder and there can be huge patches along the road.  But that is not the worst of it ... that occurs once you get to Wallaroo - a bigger place than what I thought it would be ... clearly a holiday destination with huge houses backing on to a marina and who are clearly not paying enough rates as the roads are atrocious - they are probably the original roads from 1950's - I kid you not!  There are more potholes and patches in this town than the entire Australian road system, honestly I saw nothing of the town as all I could do was look at the road in front of my tyres to make sure I don't disappear down a pothole!
Anyway we tried the caravan park right next door to the ferry but that was full (only 18 sites available and the rest are cabins) so we had to come to the top tourist which is on 100m or so from the ferry terminal as the crow flies but about 3.5km by road as you have to go around the entire marina which has some lovely houses and quite are few are rental homes and are empty!  who said Australia was heading towards a depression!
So at the top tourist park we got an unpowered as the powered is really expensive - it has a camp kitchen which has bbqs, fridge, toaster and kettle so it is not bad.
Went for a walk along the beach as the tide is out and it is lovely here ... it would be an absolute dump at christmas holidays as it would be really over crowded and any place that is crowded is a dump!
Near the ferry terminal they have the grain silos and I think by the looks of it in this photo there is a long hose that goes to the wharf and I assume they fill the ship up with grain?

here is a close up of the silos and the red roof at the bottom is where we catch the ferry tomorrow ... 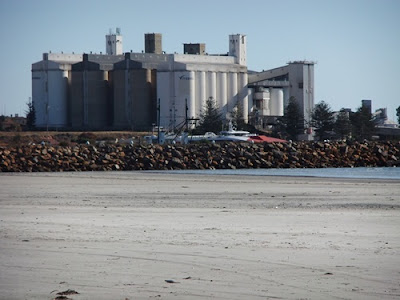 here is some more photos of the bay ... 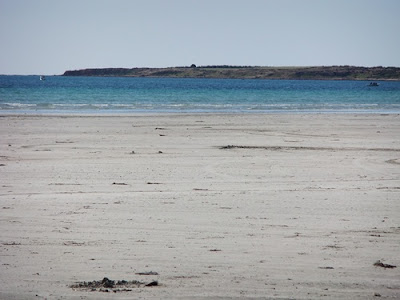 and this is the campground ... the front units are part of the park and the caravans on the right are $31 powered per night for the beach view!

Not sure when we will be having a rest day - it depends on how we go with the ferry.