MURRAYVILLE TO LAMEROO = 67KM
CUMMULATIVE TOTAL = 503KM
LAMEROO LAKESIDE CARAVAN PARK = $21 (powered) $15 (unpowered)
So glad we cycled today :)  We were meant to have a rest day in Murrayville but saw that there was minimal wind today and thought why not get further along as the north westerlies are about to kick in so that would mean a head wind to Murray Bridge.
It was a cold night again so we slept in all our clothes - we are cursing that we have this tent with the inner tent being mainly mesh - great for summer but not for when the nights are cold as it lets in the drafts and wafts of cold air ... we are definitely looking for another tent!
Off to a good start with a very slight tailwind (which didn't last!) and we stopped at Panitya just before the border to scoff down the last apples before we crossed into South Australia (they don't allow fruit or veges through due to a fear of getting the fruit fly).  Neil is not a big fan of apples and is sick of them ... me I couldn't cope with throwing the 2 away so he had to eat one of them.  While munching away we looked at the wheat silos and could hear a bird so we looked at the top of one of the towers and here was this Peregrine falcon (I have never seen one)
﻿ 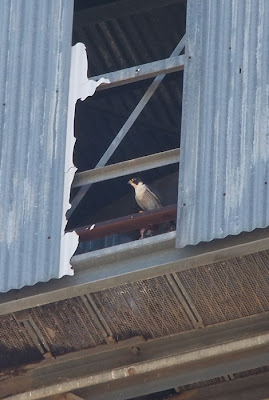 and then it flies off ... and to me it looks like it is carrying something ... 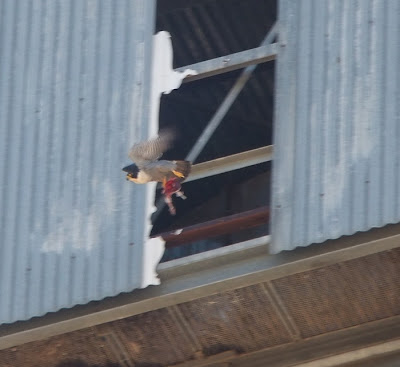 Just down the road is the border and there is a building but it was not manned as we went through (so we could have saved our apples!).  We crossed the border at around 21km 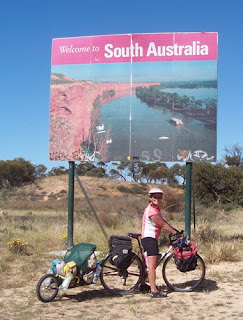 The traffic was quite heavy today especially going in the Victoria direction and eventually they all started overtaking us and going in the South Australia direction.  A mixture of cards and trucks.
We passed through Pinnaroo which is a reasonable size town and we noticed that once we crossed into South Australia that the crops are irrigated and look alot healthier than their compatriots just over the border!
Tomorrow (wednesday) Pinnaroo is having their show day and there was a very unique form of advertisement for this even about 5km west of the town 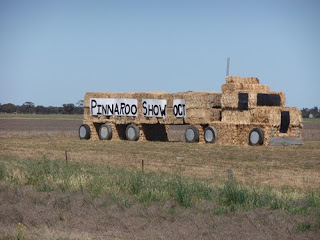 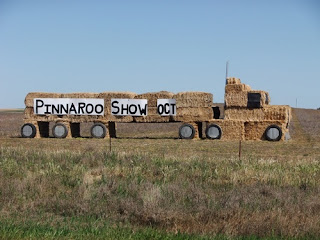 very creative way to use hay bales.
We stopped for a cuppa at around 38km and by now the legs begun to get weary, it was still pleasant cycling the wind was nothing and it was a bright sunny day and only around the mid 20's.  Our final stop was at Parilla and it has a nice new toilet and shelter - this town does have seasonal dongas (which we saw coming into town on trucks) as this has potatoes we think as we saw a sign coming into town of the 'Parilla potato'.
﻿
﻿
At the rest area they had a great "rock weather station" - very creative these South Australians! 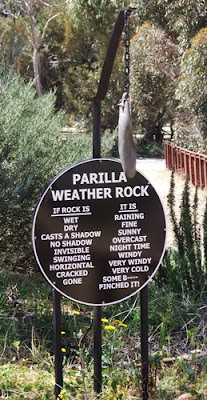 had a good chuckle at this and thought that Elders get their weather forecasts from something like this!
So happy to get to Lameroo and the caravan park is near the golf course which is irrigated and has lovely green greens and even here at the park it has grass but not much shade, our tent is pitched so that it gives us mid afternoon shade as it might be a bit hot tomorrow.
The park has showers and toilets which require a key as do the electrical outlets for each site, I suppose that is because they get so many itinerant travellers and workers through here and they may abuse the system and not pay.  Mind you it is a little on the expensive side to camp but hey that is okay.  The park is a community one and has yet to get laundry facilities so we had to do our laundry in the shower which is okay as they are huge ... there is room for a pony in there as well!﻿
Here is our tent spot ... 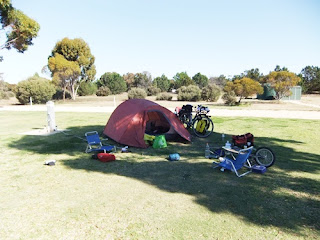 going to enjoy my day off tomorrow.  The supermarket is quite good and Neil managed to get some mark down dip and that was our first fresh food (besides the heaps of apples we had along the way!) since Hopetoun - 4 days ago.
Posted by Janet O'Brien at 4:42 PM