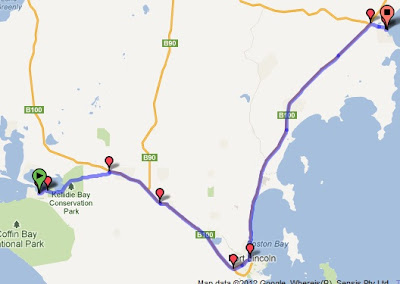 COFFIN BAY TO NORTH SHIELDS = 56km via Port Lincoln
NORTH SHIELDS TO TUMBY BAY = 40km
CUMMULAT﻿IVE TOTAL = 1419km
NORTH SHIELDS CARAVAN PARK = $29 powered
TUMBY BAY CARAVAN PARK = $27 with Top Tourist discount powered
I have been a bit slack lately with this blog but yesterday I had a very bad case of hayfever - my first for the season.  Been pretty lucky so far and have only had the odd symptom here and there but with the northerly winds and cutting hay around Port Lincoln ... it had to happen sooner or later.
Well the wind blew for the bulk of the night while at Coffin Bay and we set of around the usual 8.30am and it was blowing predominantly from the east but we were lucky in that the road from Tumby Bay to the Flinders highway was sheltered both sides of the road so the wind was neglible.
Kouta had a little bit of excitement along this road ... it goes something like this:
Kouta: "oh oh oh, Janet?, K-F-E!, stop, stop, K-F-E!, K-F-E!, stop Janet!"
Janet: "sit still what are you on about?"
Kouta: "K-F-E!, K-F-E!"
Janet looks and sees what he wants and decides to take a photo ... 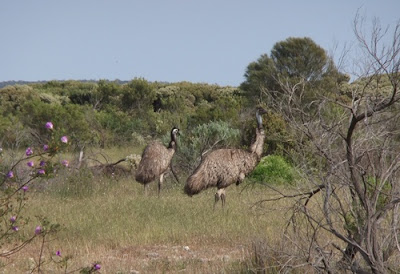 K-F-E = Kentucky Fried Emu !!!!!
Yeah right kouta!
We joined the Flinders highway around 14km and from there you climb a bit (but it is an easy gradient), the road is starting to get busy and there is a relatively good shoulder.  The wind has swung a bit to a north east while the road goes in a south east direction so it is now on a our side and sometimes on our back.  The trees along the roadside give us shelter.  There are 3 roads into Port Lincoln - the Flinders highway swings north a bit, but a bypass road swings south a bit and then goes into new west road or another that loops and approaches Port Lincoln from the south.  We took the New west road which was a bit rough in places but a steep hill down into town.  We found the Woolworths and stocked up on food basics.  I did the shopping and couldn't resist the 12 pack of cinnamon donuts for $1.96 and they WEREN'T marked down!
We haven't had a great deal of sweet stuff on this trip - just the usual bickys and fruit cake while on the road - basically because we don't come across big supermarkets to tempt us ... paying upwards of $6.00 for a Sarah Lee cheesecake sort of puts you off a bit! 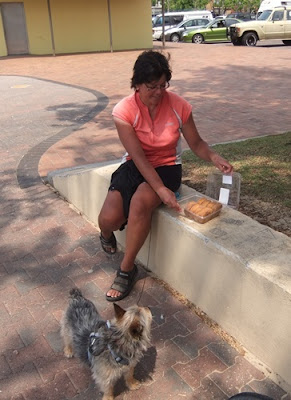 after shopping we went down to the wharf for a donut or 3 (kouta did have a fair chunk of mine and Neils serve - I swear he eats more than us!).  They have a swimming enclosure ... Neil reckons from the sharks 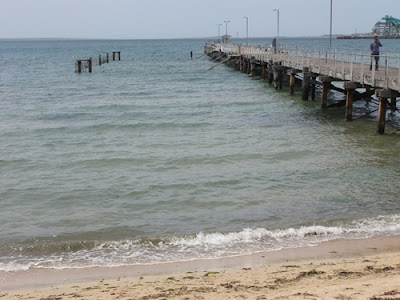 There was a camping store close by so we had to stop and get Neil a foam mat as his thermarest is not staying inflated and we have tried to find the leak to fix it but in most caravan parks the sink facilities are a little to small to submerge the mat in to find if it has a hole or if it is the valve.  He finds one and by now it is mid afternoon and wind has died down considerably (lucky for us) as we have to go North along the Lincoln highway to North Shields - the caravan park in Port Lincoln doesn't take dogs.  It is hot by now and for the first 4km out of Port Lincoln it is undulating and some of the undulations feel like munters, the temperature is around 30 degrees.  After the 4km the road flattens out a bit and since the highway goes along the coast (the only time it does around the whole peninsula) we get the opportunity to enjoy the view even though we are on the other side of the road!
North Shields caravan park is right on the waters edge and our campsite is about 20m from the water but between us and the water is the big concrete pipe that takes water to Port Lincoln and also the old road which is half missing - errosion!
our campsite ... 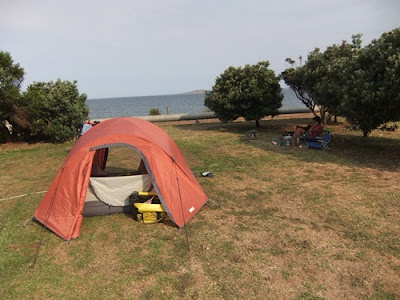 I tell you since getting the foam mat Neils bike is beginning to look a bit like yours Dad - lots of things piled high on it ... I said it looks like something you would find in Vietnam! 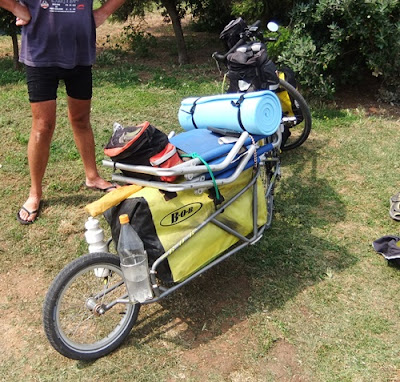 Glad to get to the campsite but the hayfever is getting worse, a cool change is meant to come and it does around 4pm.  From the campground you can see back along the coast to Port Lincoln ...

﻿
﻿
﻿
﻿
﻿
This morning we woke and the wind has swung around to a north westerly ... we have the worst luck with wind - going south we get southerly headwinds, we swing around to go north and guess what the wind also changes and becomes northerly headwinds .... I am jinxed I reckon!
however upon walking back from the toilet early this morning I did see a fantastic sun rise (around 6.30 - 7am) 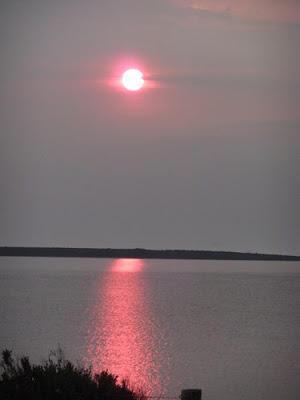 The sun was a glorious pinky orange.
We set off around 9am as we only had 40km to go but we did look at the weather radar as it was pretty cloudy but warm and the radar did show that  there might be the odd shower so we decided to go.  So there are no photos as the camera was tucked away nice and dry as we had showers for the first half.
The wind was a very strong cross headwind and for part of the way an incredibly strong headwind and then back to a cross headwind so sometimes the going was tough.  But we got here just on midday ... the wind has picked up now and is around 40km per hour! lucky we got here.  The forecast is for it to swing around to the south but we stay here tomorrow and it should be a tailwind for us when we go to Arno Bay on Friday.
The campground is nice, good camp kitchen despite what Badgers says and we have a good corrugated fence behind us which shelters us from these 40km per hour winds ... we are so lucky.  Still warm around early 20's.
Catcha later.
Posted by Janet O'Brien at 4:22 PM