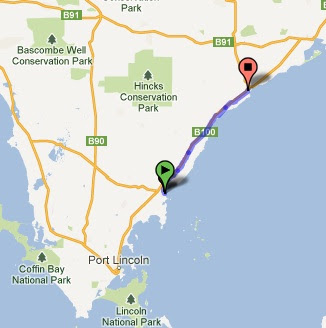 TUMBY BAY TO ARNO BAY = 73km
CUMMULATIVE TOTAL = 1492km
ARNO BAY ABSOLUTE TOURIST PARK = $25.00 powered
Woo hoooooooooooooo we had a tailwind today ... our first in over a week.  It wasn't as strong as the previous days headwinds (except for now but it is late in the afternoon) but it was enough to make today a little easier!
We really enjoyed our rest day at Tumby Bay ... it is a lovely place and I would have to say not all that touristy - I can imagine what tourist homes are available and the caravan park would be busy in summer hols but the rest of the town seems to be full of retirees ... in other words alot of elderly walking around and there is a considerable amount of them!  I suppose because it has a reasonable size hospital and Port Lincoln is only 50km away it seems logical to stay put in your home in Tumby Bay.  Here are a few pics ... 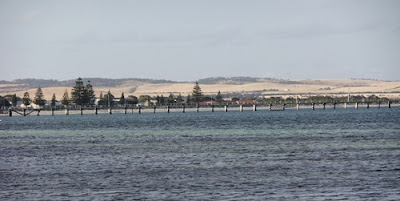 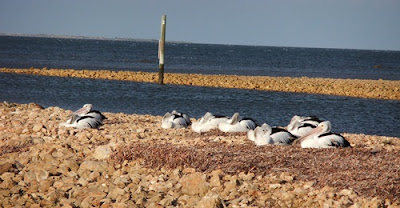 we are not sure what sort of fish these are and does the sign mean while you are in the water or are they stranded on the sand ... we couldn't see any!﻿ 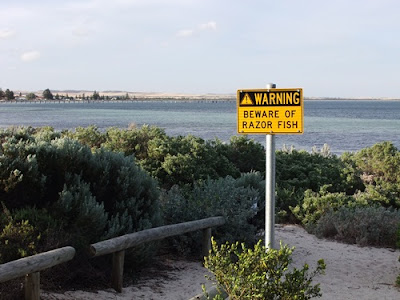 Also during our rest day decided to give Kouta a haircut ... it has been 24 hours since we cut his hair and he is finally forgiven us and lets us pat him ... attitude! 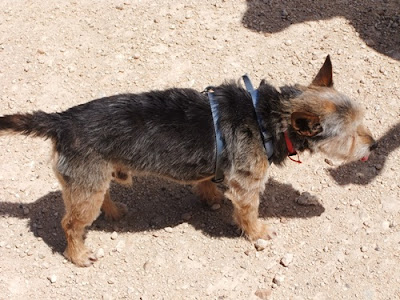 doesn't he look 5 years younger!
Anyway onto todays riding ... we heard on the Eyre Peninsula radio that there is a group of 22 riders from a Cycle riding group leaving Port Lincoln and riding 1000km in a week to Adelaide - they are riding for the Ronald McDonald charity.  They are unloaded and racing lycra brigade.  Anyway they were due in Tumby Bay for lunch and then onto Cleve by 4pm a total of around 140-50km.  We thought they might catch up to us at some point but as we pulled into the turn off to Arno Bay their support vehicles also pulled in and they were about 20 mins behind us!  At that point they had ridden around 120km! while we had ridden 70km but we aren't loaded so we did good time.  Apparently﻿
﻿
they averaged around 35km per hour while we did ours in around 17km per hour!
The terrain from Tumby Bay to Arno Bay is undulating, not difficult or steep undulations just continuous!  Everywhere you look are grain fields and everything is a golden yellow colour ... lovely. 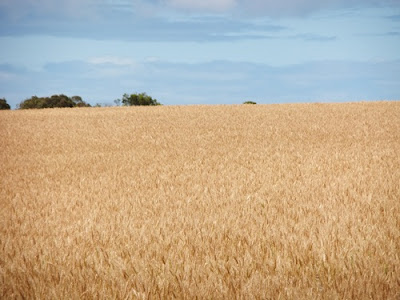 We even saw one field had already been cut!
Arno Bay is a real fishing place, more so than the others.  The park is small and crowded and ALL here (except for us) are here for fishing!  The bay is open and rough not really suited for swimming.
On the way in to here we saw a sign for a Tuna Hatchery and Neil said you can see them out towards the see so I will go have a look later when we walk Kouta.
Tomorrow we are back in Cowell which is around 44km and hopefully we can make it before 12 midday before the IGA closes!﻿
﻿
﻿