We are still here in Auburn, unfortunately we have had to have an enforced rest day (not that I mind that!) but we sure had some really wild weather since yesterday afternoon, evening and through the night.  Just thought I would share some photos of what we had ... It is about 6pm and I ducked over to the toilet which is about 40m from our tent, upon walking back I felt a drop and then another and all I could do was sprint the remaining 30m to get back into the tent but alas I didn't make it, I got to the grandstand and it just poured down so I had to sit there under the grandstand for around 20mins while it rained and then hailed ... it was a tad cold outside but I was dry ... once it stopped hailing and ceased raining I managed these photos ... this is from the front - 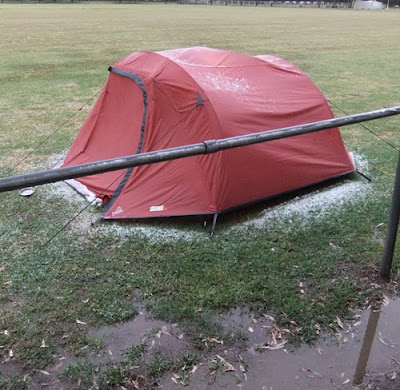 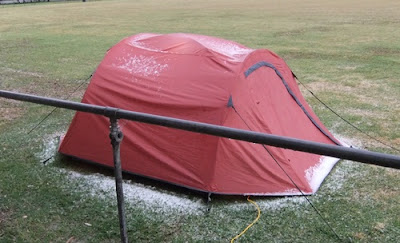 as you can see the hail stayed on the tent and managed to melt together and become almost snow like ... it stayed that way for a good 3 hours before melting.  Here is a view from inside the fly - lucky it didn't melt into the inner tent area! 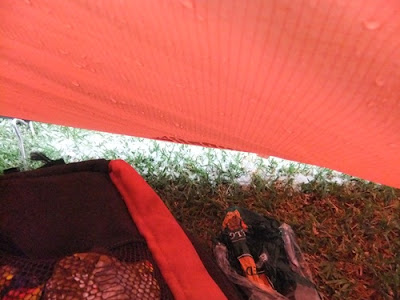 So all through the night it was raining and blowing a gale and even early this morning and although the forecast was for clearing showers the wind was driving the temperature to around 12 degrees and what was worse was that the wind speeds at Port Wakefield where we were meant to cycle to today was around the 40-50km per hour speeds and that we would be riding into that so I flat our said no I am staying here it is too cold to ride and it would be a miserable day ... Kouta second that by this ...﻿ 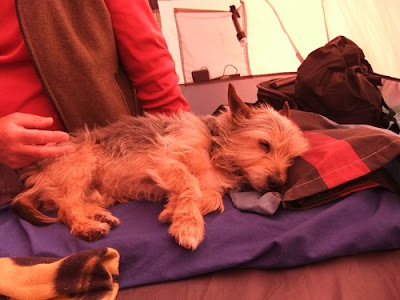 I am not joking that is Kouta sleeping with his head on Neils pillow :) he often does that on either of our pillows ... he is becoming so human like!  Fingers crossed that we get to move tomorrow - the bulk of the bad weather seems to have moved on!
Posted by Janet O'Brien at 4:53 PM