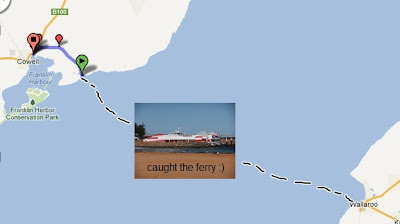 WALLAROO & LUCKY BAY TO COWELL = 19km
CUMMULATIVE TOTAL = 966km
HARBOURSIDE CARAVAN PARK = $25 (powered)
Before I begin on our ferry trip over - yes if you look at the map I put the ferry crossing on the map although I don't know how far across in distance it is!
But first I thought I would share with you something and then show you a few photos from last night ... Last night while doing the blog in the kitchen one of the campers came in and offered me half a potato salad and a lettuce salad - he said that he was going to throw it away as the kids won't eat it but thought he would offer it to me first (I think he saw us come in on the bikes and felt sorry for us!) so that was lovely to eat with Abbots bread mmmmmm! now for the photos ... the first is Kouta walking along the beach at sunset and there is a guy there flying a remote controlled aeroplane and so it produced a buzzing noise that was driving kouta nuts as he couldn't figure out where the noise was ... eventually he worked it out and was following it everywhere it was like he got second wind and was chasing it!﻿ 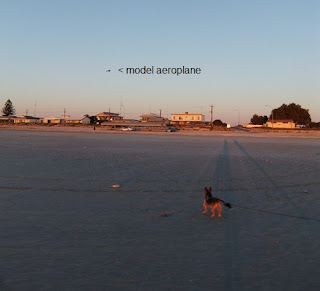 The next is off the sunset ... 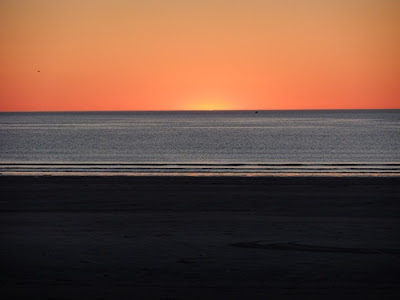 it was a good night temperature wise and we got to have a little sleep in as our ferry didn't leave until 12 midday, since check out was at 10am we got to the terminal a little early ... on our way I thought I would show you the state of some of the streets around here (remember how I was complaining about them last night!) ...﻿ 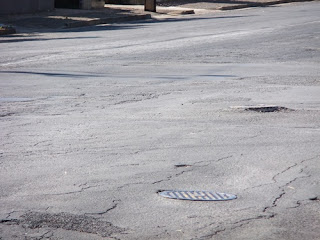 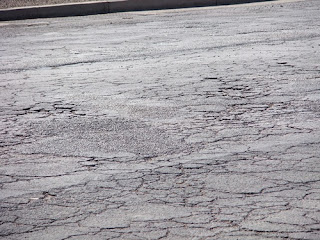 here are some photos of the Wallaroo ferry -﻿ 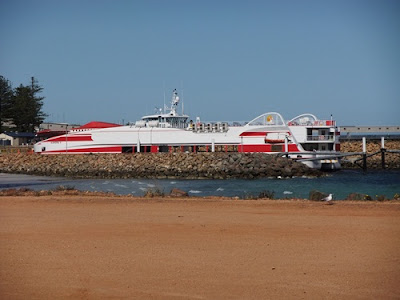 this is the front and they had to take it out and then reverse it back in ... the problem they had when getting it back in (rear end first) is that the wind had really picked up and it kept pushing it across towards the rocks ... but really it doesn't have much room to manouver (spelling?) between the poles ...﻿ 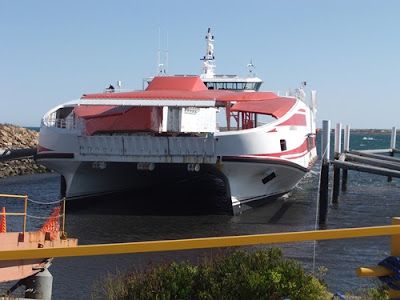 and the cars start to load on and then the passengers and us on bikes ... 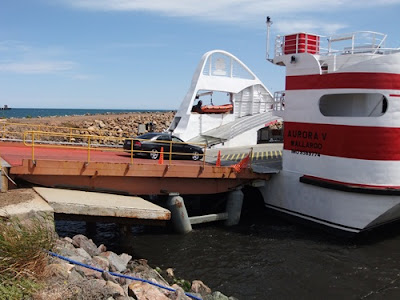 Once we let kouta out of his trailer he just thought "what the hell are we doing now ... I'm too old for this"  LOL - he thought all the noises were strange but once we got him upstairs and under cover and in his basket he was fine ...﻿ 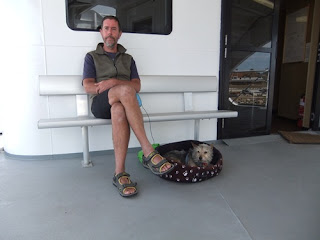 mind you he longingly looked in that doorway there knowing that was the 'inside' but we were not allowed in there with him! so we stayed outside mainly on the stairwell as it was protected from the strong northerly wind - I tell you that was blowing and as we got closer to Lucky bay it was a bit like being on a pushbike into a headwind ... it just got slower and slower and I think it got in about 20mins late!﻿
This is the view from the boat of Wallaroo... 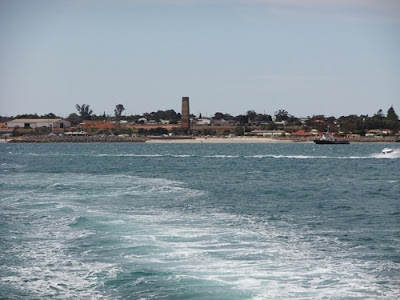 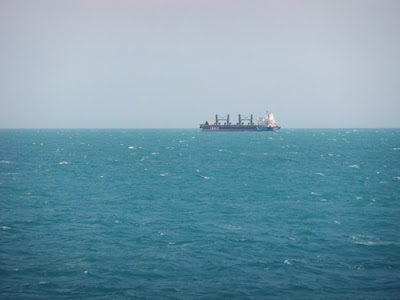 Kouta slept for most of the way whereas I sort of felt a bit sick especially out in the sea - Neil said the sea was calm but every now and then the boat would rock quite a bit - you couldn't walk straight without having to hang on to something so I assume his assumption that the sea was calm is WRONG!﻿ 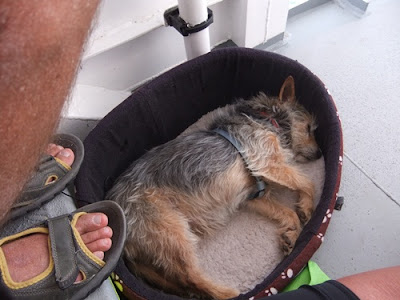 So Mum I think I may have your gene of sea sickness - but I did go to the top deck and that felt a little better - I think where we had Kouta at the back of the ferry you really felt the ferry roll - once on top it wasn't so bad and I did lie down on the stainless steel benches and that felt even more better!
Once on land we had to ride about 14km to the caravan park - straight into a head wind and boy was it hot ... 4 days ago we were freezing and today it is hot with very strong winds blowing and that will be the same tomorrow.  We will continue to some Weir just before Cleve and if it is nice will stop for a rest day there.﻿
﻿
Posted by Janet O'Brien at 8:21 PM