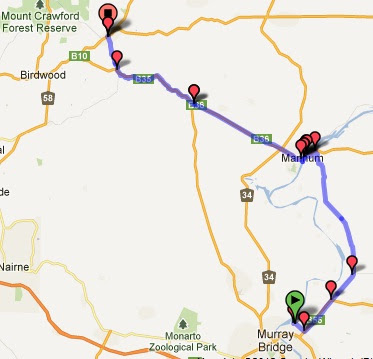 We have just had the day from Hell and I won't repeat what Neil said about how he thought we might feel by the time the end of the day comes ... it is something beginning with F and ending in D and there is a 'K' in there as well!
It began with a light rain last night with a bit of thunder and lightening ... which means Kouta has a panic attack and is between us panting with his bad breath all over us and we try to console and in the end I gave up and rolled over and left it to Neil!
So it was a later start than normal as we thought we were only going to Mannum which is 30km up the road.  So we start off and decide to take a small road and had the idea that it won't be sealed for around 500m to join with the main back road going to Mannum ... well that was the first mistake ... sure it wasn't sealed but it wasn't even gravel ... it was a sand track and it was soft sand so we started along it having to push the bikes, due to the weight of the bikes they just sunk in the sand so after the 500m we were drenched in sweat and our feet, shoes and cleats were covered in sand!
The back road to Mannum was quite busy with people using it to go to Murray Bridge.  It is an undulating road by the rises are ridable.  Although our last 2 days cycling have been quite strenuous that some of the rises were a bit hard on the legs.
Getting to Mannum the caravan park that takes dogs is on the same side as us (Mannum is across the river) and it is a Cowirra, so we rock up there and this is our 2nd disaster of the day, we ride in and then just rode straight back out.  You remember yesterday our first campground was full of permanent holiday sites and didn't look like it took in the blow in traveller or overnighter ... well this was another one.  So we jump on the ferry and sit in Mannum thinking about what to do as the main caravan park in Mannum doesn't take dogs.  After much deliberation we decide to pick up supplies and continue on to Mt Pleasant as we have no other choice.  I didn't really want to and neither did Neil as we knew Mt Pleasant is up in the South Lofty Ranges and we hadn't looked at the mountain profile so we know what to expect when tackling the hills.
The information lady in Mannum wasn't much help with caravan parks that are closer but she was accurate with the description of the road up to the ranges - it is gradual up to just before Palmer.  We didn't like Mannum at all in fact we have been very disappointed with the towns along the Murray (including trips before) they are definitely overpriced, cater to the 'stay put' holiday people that are only there in the school and christmas hols and the sites are cramped and small - suit us but not great when you are stuck next to a caravan that takes up all the space and a little of yours and that you are so close that you can hear their TV ... in fact at christmas these places must be awful and charge an absolute fortune for this type of experience ... I think all towns along the Murray have tickets on themselves ... when in fact it is a lovely river but not that great!
So we set out and we have a cross wind for the bulk of the journey - Mt Pleasant is only 29km from Mannum but how much of that is uphill?  we now know that it is around 25km uphill and 4km down!
Just before the town of Palmer (at 47km)  you start a very steep ascent and just out of town it gets a bit steeper around 7% for around 5km and then it flattens out to a gradual climb.  It was a busy road and very winding and not much of a shoulder to ride in - sometimes it was there and sometimes it wasn't.  On the way up we saw the bear rock the town promotes ... 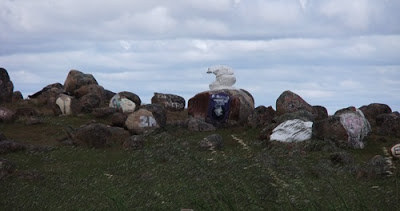 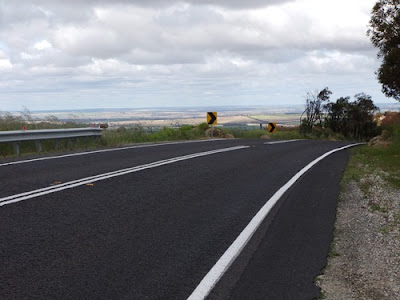 all up this steep part of the hill was around 5km long and it took ages for us to do.  It then goes down for around 2km and then a gradual ridable uphill to Tungkillo (it was a 'killo' alright!).  After that it goes up and down for another 2km and then we take the small road that goes to Mt Pleasant which is by now 5km away and we can both see the light at the end of this rather long arduous tunnel! - this was a narrow road used by locals and very winding and uphill with a little down hill to Mt Pleasant﻿ 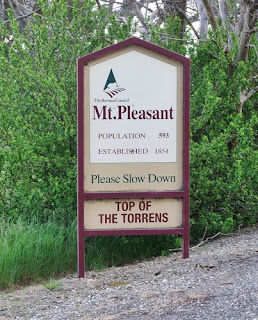 I was so relieved to see this sign that I had to take a photo of it.
The caravan park is in the local sports ground, there are a few permanents and a few big 5th wheelers (which you find alot in these sorts of local/community caravan parks).  It is nice, quiet and at the moment being this high up it is going to be a damn cold night ... I have very clean clothes left and I am sleeping in all of them tonight, the gortex has come out and that will act as a blanket and I have told Kouta that I am IN my sleeping bag tonight and he will have to fend for himself!﻿