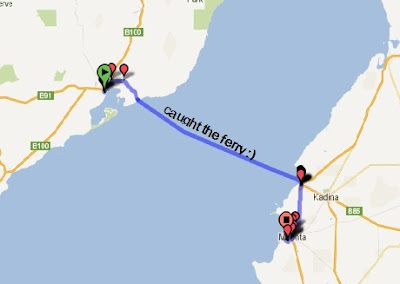 COWELL TO LUCKY BAY = 16km AND WALLAROO TO  MOONTA BAY = 21km
CUMMULATIVE TOTAL = 1576km
MOONTA BAY TOP TOURIST CARAVAN PARK = $28.80 (with discount) powered
It was a warm day today lucky we were catching the ferry for the bulk of it!
Yesterday we had a lovely rest day at Cowell and we decided to have fish and chips for lunch.  There was a fish kiosk where the jetty was and it wasn't much to look at but they had the loveliest looking fish!  It took a while to cook as I think Neil said all they had a was home fryer!  So once we got our 2 pieces of King George Whiting and a serve of chips and walked along the jetty and found a less windy spot to have our lunch ... 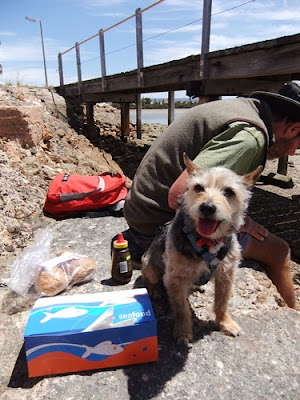 as you can see either Kouta looks real small now or our lunchbox is huge ... it is the  fact that koutas haircut makes him look tiny!
Here is what is inside the box ... mmmmmmmmmmmmmmm... 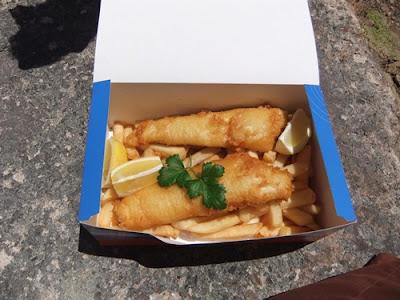 ﻿
So a peaceful day was had, the weather was very sunny but a chully south easterly wind was blowing.
Onto today - we got up and left relatively early allowing for any major disaster to happen to us along the way and be able to solve it and still catch the ferry at 10.30am.  We arrived in plenty of time, quite a few people caught this ferry and as per usual Kouta kept getting his photo taken while we waited to board the ferry.
The ferry departs from Lucky bay and this is a single line of holiday shacks along the beach front and I tell you they look a bit like steptoes yard (and I don't mean you dad!), they are a mish mash of corrugated tin and hardiplank type materials and you cannot see where the boundary lines are and the fact that there is no fences between each shack so I would imagine that there would be a great deal of someones boat and trailer on someone elses yard! 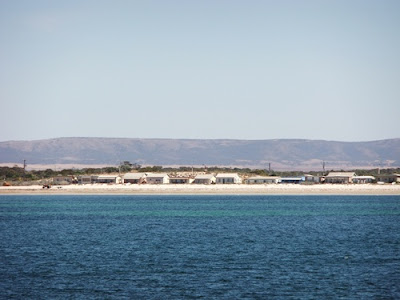 this is taken from the ferry.  Obviously the ferry is well patronaged despite the cost if you have a car and caravan, it is great for us and saves us heaps of time.
Here are the cars on the ferry 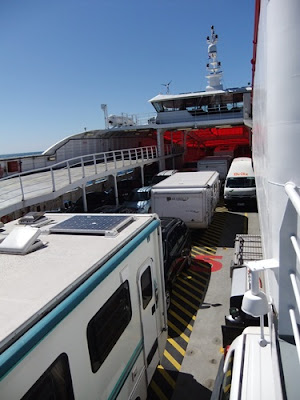 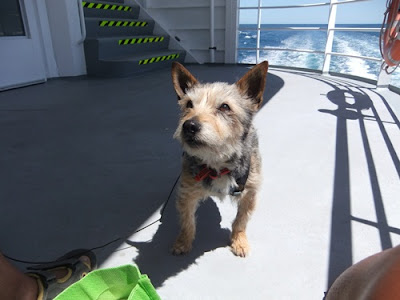 I think he found this crossing a little better than the last ... and so did I.  It was a very calm sea so there was little or no rocking.  It wasn't until we were close to Wallaroo that there were a little bit of white caps on the waves but still it was smooth sailing.
Once on dry land, we had a hot northerly wind to take us down to Moonta to pick up supplies from the Foodland there and then onto Moonta Bay few kilometers down the road.
We had to pick up quite a bit of food from the supermarket as we were running out of stuff and we picked up some bargains ... like Earl Grey teabags were on special unfortunately at the checkouts the cash registers weren't recognising the specials and they all came up at their full prices.  Off course the young filly I had decided to tell me that about a third of the way through my order ... so I thought I had mentioned all that should be on special and it wasn't until I got out outside that I looked and saw that she charged me for my teabags at the normal price and again at the special price.  So I went back in with all my shopping and pointed out to them that my Earl Grey has come up at the normal price and I showed them on my docket and then I showed them a generic $4.99 which I said is the special price for the teabags and they said it wouldn't come up as 'generic' on the docket but as Earl Grey ... I said I know and I can see that there and pointed to the docket but I had to explain and convince them three times that I have be charged twice for Earl Grey ... eventually they saw my way and refund me my $6.45 !
Moonta wasn't looking great so far to me ....
and that didn't exactly improve either - the campground is a top tourist park and you have to pay a $20 key deposit and a $10 dog deposit (basically if someone complains about your dog you don't get your $10 back!).  It is very expensive $32 normally but with a discount it came to $28.80 and that $28 is solely for the location and nothing else ... oh may be for the roses that are everywhere in the park.  There are not enough toilets and showers - I would hate to be there at peak time, the sites are cramped in and tiny (ok for us and our little tent), they put us down below with every other tourist and so we couldn't get internet access due to the cliff behind us, it was an incredibly sterile place and to really annoy me there was NO camp kitchen.  At that price I expect a camp kitchen!  We got an okay spot and could see the ocean as well as what our neighbour in front of us was having for dinner ... here is the spot ... 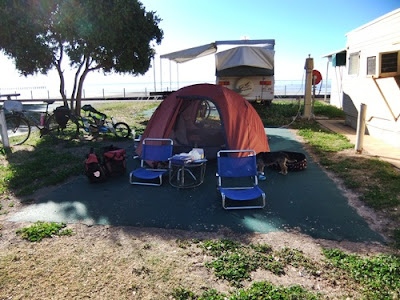 one good thing ws that we had shade as it was hot - early 30's.
Now Moonta bay ... well everyone said ah that is a lovely place .... personally I can think of bays just as nice or even better, in fact the foreshore is a big disappointment - a concrete jungle ... maybe it was better on the other side of the jetty? not sure but I am not going to bother going there again!
here is Moonta bay when the tide is out ... mind you we did see dolphins frolicing in the ocean with the monculars but even then they were still black dots on the horizon bobbing up and down! 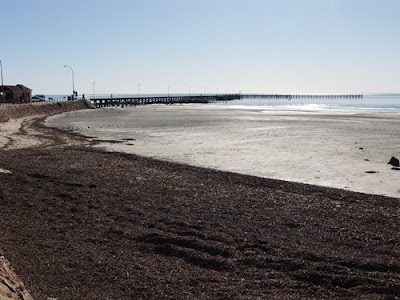 more on Moonta bay in the next post.
Posted by Janet O'Brien at 4:03 PM