Hi di Hi campers, we are officially in Queensland our 3rd state to ride in and will probably be cycling in this state for a good 3 months!  We had a good rest day at Yetman yesterday, 2 vans and the tenters went so that left us on one side of the tennis courts and another on the other side!  We decided that since the Geelong vs. Hawthorn game starts at 3.230pm that we would have our dinner at lunchtime.  They have 2 bbqs here at the hall, very clean so we used them! 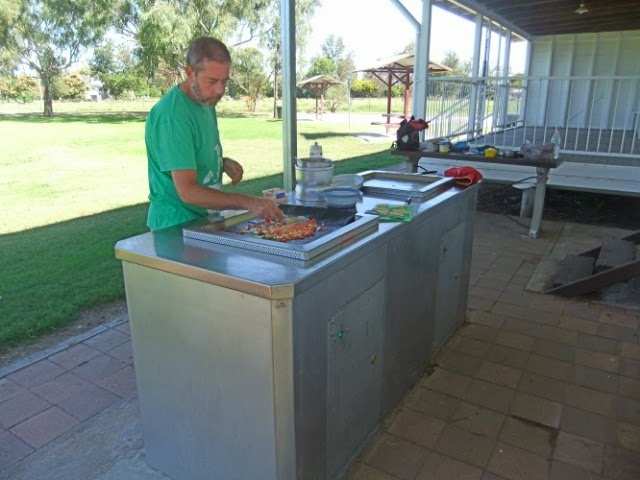 When we had arrived here the day before we  pitched our tent so that at 3.30 it would be in the shade so that we could watch the game in the tent ... 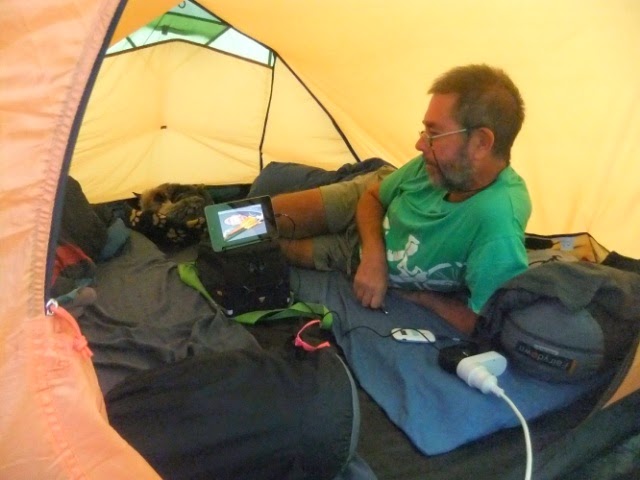 it was a good game made even better by Geelong winning and looking good for a grand final berth!!!  So happy we got this AFL app, despite yelling at it when it freezes or crashes at crucial points in a game! yesterday the internet was slow so the bulk of the last quarter couldn't upload and down load fast enough to keep pace with the video but the most important part we didn't miss which was when they managed to get ahead by 4 goals ... so happy when we beat Hawthorn!
This morning we woke and it was relatively mild, I put on the polyprops just out of habit, I didn't really need them on!
We left at 8am, I had forgotten to check the profile so we didn't really know what was ahead of us so we assumed a hill!
We took the Bruxner Way that runs straight east towards Texas.  Not alot of traffic this morning but there were more trucks than yesterday (no trucks yesterday!) ... 5 trucks more than yesterday!  One thing we came across the whole way were cotton wool on the side of the road - it was everywhere, they must have blown off the bales when the trucks barrel along here as they still have their pods or seeds in them 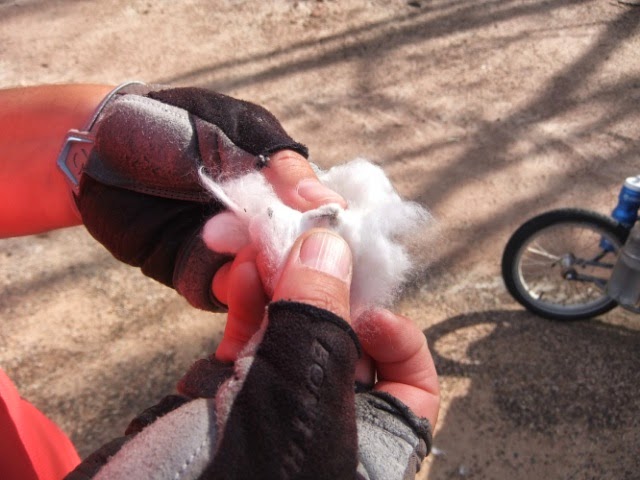 there must be a few cotton places around - we know Cecil Plains and towards Goondiwindi has cotton fields but surprised that there is cotton laying on the side of the road as the picking season I think is coming up so this must be last years crop.
Not far from the turnoff to Texas we came across a little road called Old Texas Road so we looked at the map and decided to take this road as it cuts out at least 5km and a little backtracking.  Now towards the end of this road we came across a farmer shooting out of his driveway across the road and turned around and back into the driveway ... 2 of his cattle had escaped in the open gate as he was hearding them, as we passed we slowed in case we spooked the cattle (like we always do and they start bolting along!) and the farmer got out of his Ute and I tell you we both nearly stopped dead ... this guy was a dead ringer for Anthony! same height, size, walk and even same face, look and funny hat ... it was unreal Heather!!!!  We think it might be Anthony's long lost cousin hiding in the backwaters along the NSW & Qld borders!
At the end of the road you turn left and you cross the Dumaresq River and are in Queensland 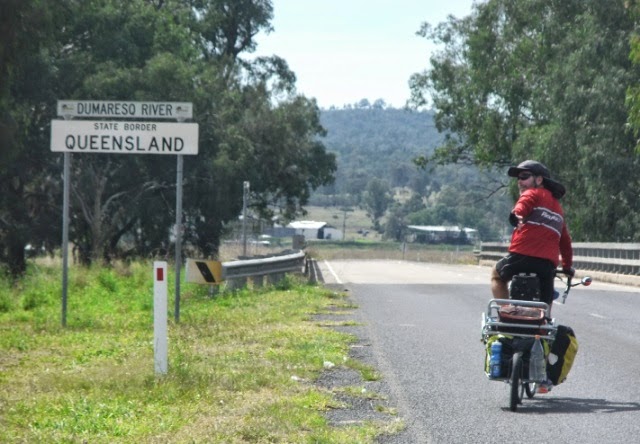 and just up the road is the small town of Texas 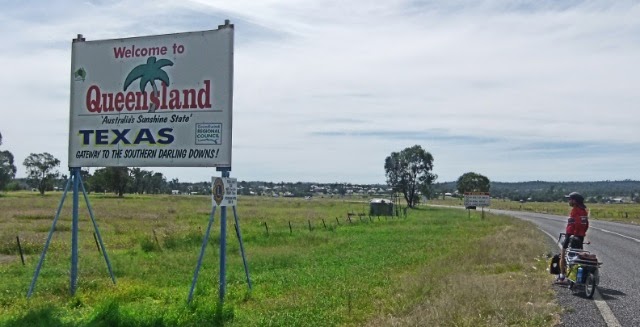 We have been here before but approached it from the north and left via the south and now we are approaching it from the west and leave via the east to Stanthorpe which is a 2 day journey with hopefully a nice bush camp along the river before Pikedale.  This is a quiet road we think and with all the local knowledge it is apparently sealed, you go to Glenlyon and then north to Pikedale and then east to Stanthorpe.  Looking at the profile it is a gradual uphill for the first 85km and then along to Stanthorpe.  Texas is at 300m above sea level while Stanthorpe is at around 800m.  Most of the hills are gradual with one or 2 steep ones along the way, our aim is to do at least 60km the first day and 45km the next.  No blog tomorrow as I doubt there is reception going over the mountain ranges!