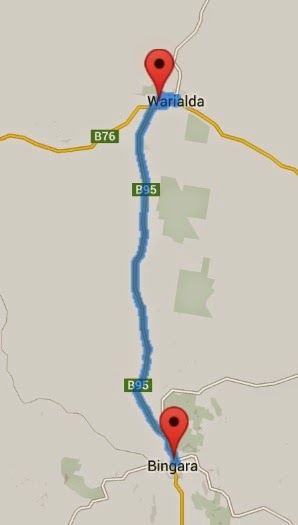 Happy Easter everyone, while you were all polishing off your easter eggs or starting to yesterday we polished of our 2 month expiry dated mince pies!!!
It was a quiet rest day although looking at the road it was busy with late comers going up the river towards Inverell.
We were entertained late in the afternoon with a Mum magpie and her young one ... they were not afraid of us and happily drank from Koutas drinking bowl that was in front of him - either he was still under the weather or asleep as he didn't chase them. 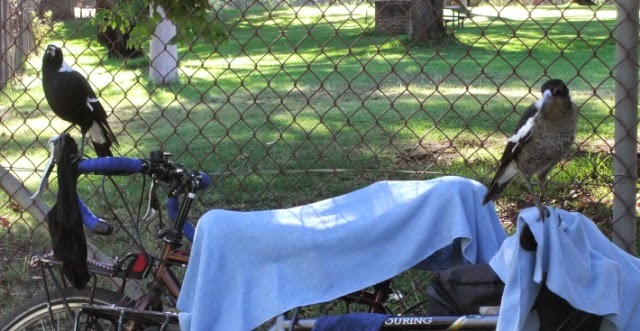 We think Kouta has recovered from his bout of illness over the past week as he was quite spritely this morning and is happily watching the world go by here at Warialda.  Yesterday evening we went for a walk along the river up towards the water plant and we took a side road and came across where everyone is pitched for the easter break ... they range from anything from a basic tent like ours to a fully equipped caravan or mobile home.  They all have some form of makeshift chemical toilet and outdoor shower, or they drive up to the public toilets in the park next to the caravan park.  Neil and I have decided that we will camp along here next time we come through as it is opposite the caravan park and near to town.  Generally they NSW doesn't like this sort of set up near a river and this sort of camping really only happens at Easter and Xmas but it goes all the way up to the Copeland Dam which is miles away!  We assume they allow it this close to town as they all spend their money in the town itself and the caravan park is small and is nearly full when we were there so they town would miss out on the money if they didn't allow the free camping along the river.  It is $10 to enter at the Dam and $35 for a powered site at the dam.
We left this morning fairly early just in case the IGA closed at midday since it is a holiday weekend.
It is up and down for the entire 40km but there was next to no traffic and there will be even less tomorrow to Yetman.
The area is now a lot drier than around Gunnedah, it has become more scrubby and there is less grass around and alot let burrs of which Kouta is happy ... he has been tippy toeing around a bit lately! 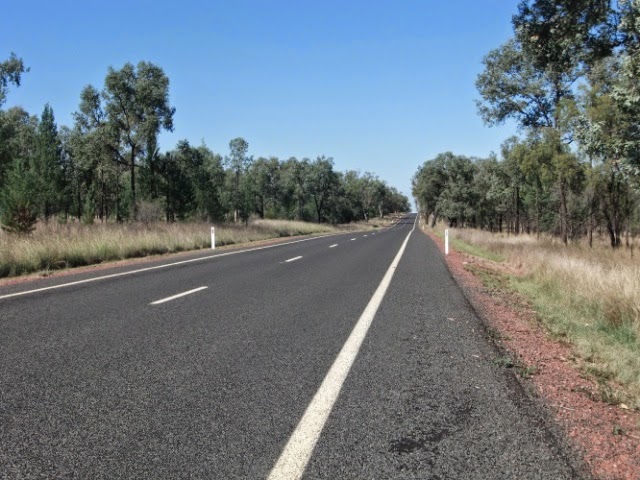 We arrived at Warialda around 10.30am and the park is empty all but one caravan.  It has a few new cabins which are apparently all booked out  as there is a funeral on Tuesday.  The park also has a lovely new amenities block.  Although there are no kitchen facilities it doesn't matter.  Neil is a little disappointed with the IGA as it was expensive and no real markdowns ... he is getting too fussy now!  We are pitched in
the shade of a big tree as it is about 22 degrees with a slight breeze. 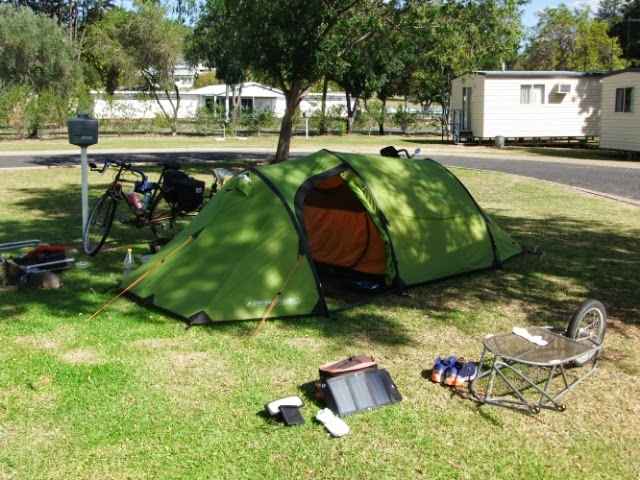 tomorrow we head to Yetman which is about 80km away and will stay there to watch the Geelong game on Monday arvo.