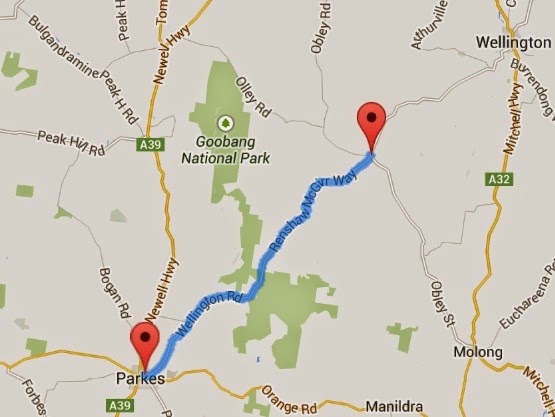 We woke this morning to a nice morning, no rain but very cloudy.  While having brekky though the fog began to set in once again.  Not as thick as some mornings so it was okay to leave.
We left Parkes with a nasty climb out of town ... and we remembered just before to we got to the base of the climb that if we ducked across the road and took the bike path we would cut out a very steep incline so we did that and it was easy sailing from there!
If you look at the profile it is a gentle climb for the first 25km and then a wee small series of hills for about 5km.
At around the 18km mark we were fortunate enough that the fog had lifted and we were able to see what Parkes is famous for ... a massive Satellite dish.  Now we have done this road before on our way up to Queensland 4 years ago so the photos below might be a bit dejavu ... the only difference is that 4 years ago it was a nice sunny day whereas today is overcast and foggy a bit so it can be a bit hard to see the dish.  The dish is famous for the Australian movie 'the dish' which was involved in the moon landing in the 60's ... 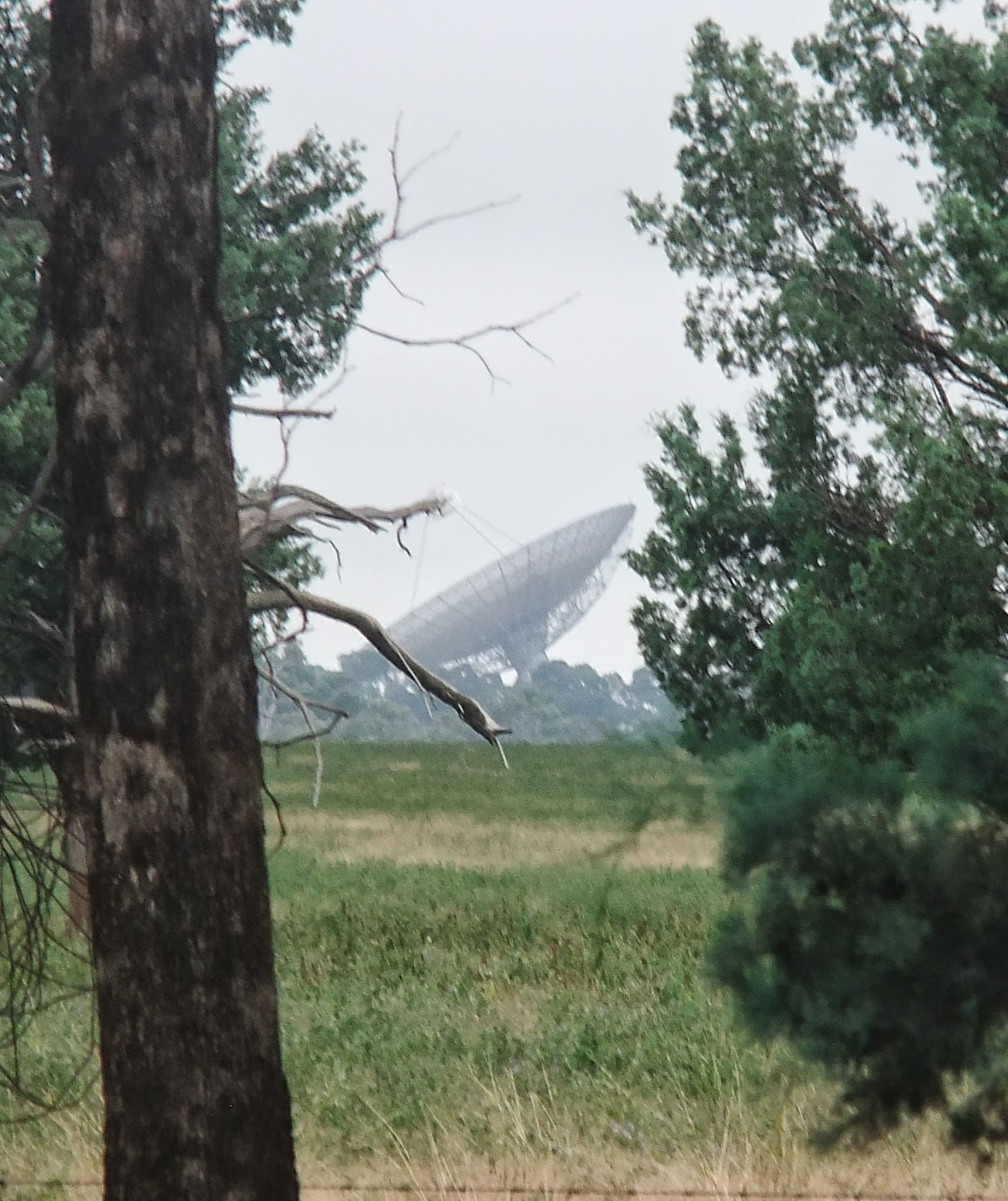 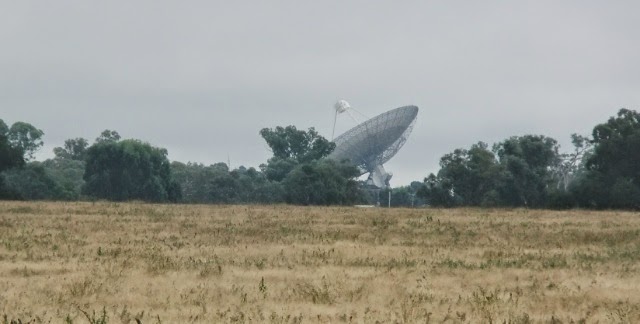 we did stop for a break  and we seemed quite close to it ... 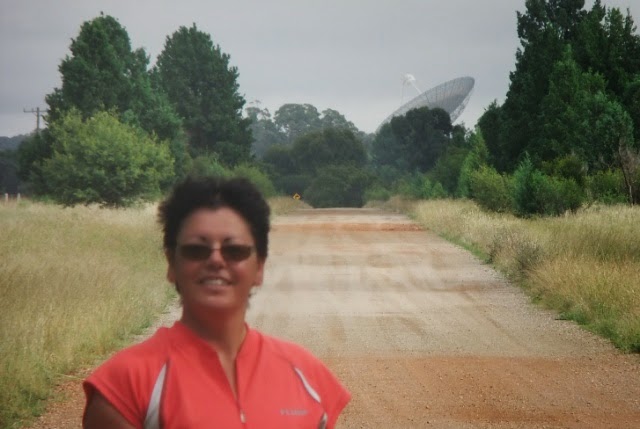 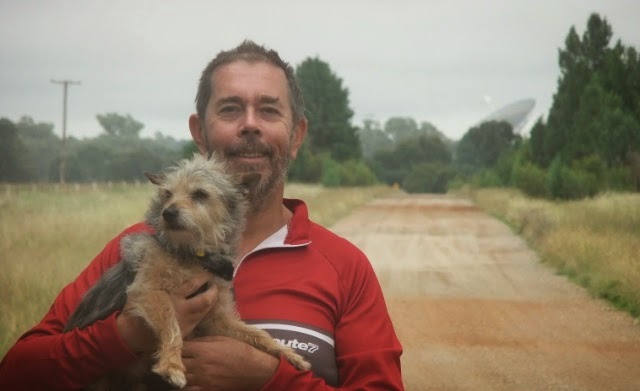 as we ride along it appears the dish is moving or rotating as the white piece is in a different position ... 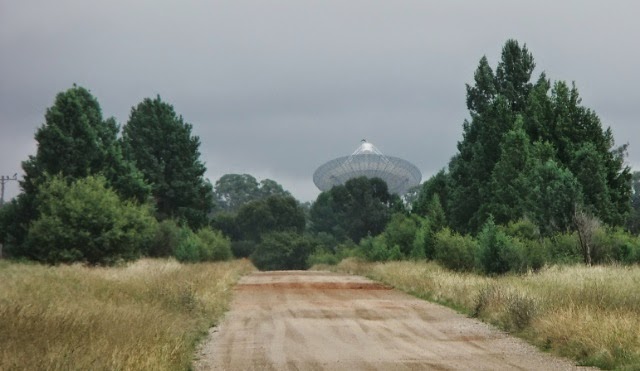 From here we start to climb a bit up to Goobang national park which is closed and is at the top of the tablelands.  It is a steady easy climb and I remember last time I struggled with this climb because we had come from the west (Griffiths and Lake Cargelligo) and there was no hill training for us but this time we have come from the south and we have had a little hill training so the legs are alot stronger and coped quite well with the steady long incline.
In fact once at the top there is no real down hill just a short one and then you gradually go down but not much.  It is like you are on a tableland.  Like everywhere we have been it is very green and lush.  Just after lunch the wind picks up and dare I say it it is a slight tail wind for us so the next 20km is easily done.  For the last 18km it is up and down with 2 steep but short climbs and then a nice down hill into Yeoval.  Yeoval has a population of 292 and is the first home of Banjo Patterson (the man who wrote Waltzing Matilda and others).  It doesn't have a campground so we go to the showgrounds, there is no one here but us (like last time).  There is not much here - tank water, a flush toilet that is a bit on the rundown side and a power box, which we will use to watch the Geelong game tonight.
Last time we couldn't get Optus and all throughout today I was looking for mobile towers on the hill tops and saw none, so I didn't have much hope as we got closer to Yeoval to be able to watch the Geelong game tonight but I seem to have eagle eyes for mobile towers and soon spot 2 very close to Yeoval so Neil and I are both happy campers to be able to watch the game tonight ... we have even carried a celebratory chocolate bar with us for when they win ... that I hope is not premature of us!
Dinner tonight was weetbix - our first weetbix dinner since there is no bbq or facilities here.  The tap water here and in town is not suitable for drinking.  Neil told me after he had got back from paying our $5 that it isn't suited to drinking so I had to tip out our pot of tea freshly made ... lucky he asked!
Tomorrow we are off to Wellington ... we have been there before when we came back from Queensland ... in fact from now on we are at places we have been to before ... we have no other choice ... although the road we are going on to Wellington we haven't been on before.  It is a short day.