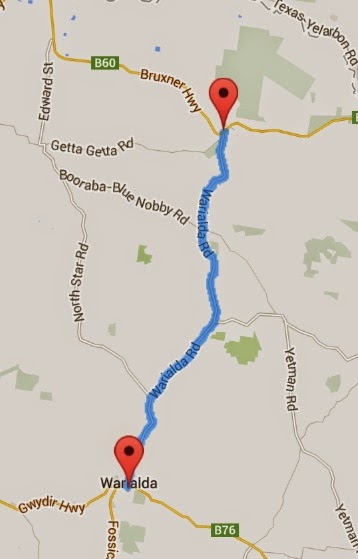 Knowing today was going to be a long ride we got up at the crack of dawn to find the lovely caretaker of the park had left 2 small organza bags of small easter eggs near the tent ... lovely isn't it.  She also left some for the cabins and the other caravans that are here.
I remember doing this ride 4 years ago and I remembered there is a steep climb out (like all towns!) and that it was a very very long day and we got to Yetman very late in the afternoon.
So Neil thinking the only real hill of the day is the one out of town and the rest is a 'bit' up and down ... well I looked at the profile properly and it is a steep climb out but you are going up and down for at least half the distance to today - to Coolatai at least.  By the 2nd climb Neil says, and I quote, "I don't remember it being THIS hilly!"  LOL poor Neil.  Just after we started somewhere between hills we saw a wedge tail eagle, now these are hard to photograph, normally I miss them and by the time the camera is out they are miles away or they are being chased by a pack of birds but todays one sat on the tree for me ... 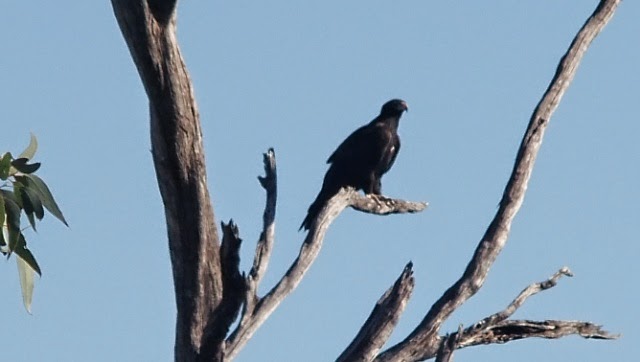 while taking this photo I could hear a car coming in the opposite direction so I took a gamble and waited til the car passed and this spooked the eagle and it flew off, so I went 'click'! 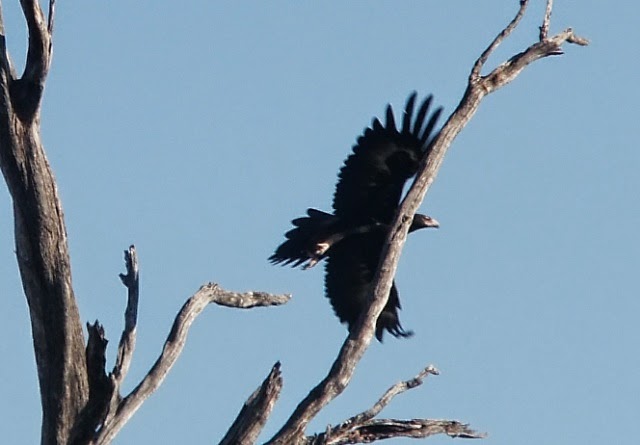 I love these birds, and I remember seeing one when I rode down the middle of Australia and it was dead alongside the road and this is the closest I had been to one and they are massive!
So the scenery is nothing by hills ... 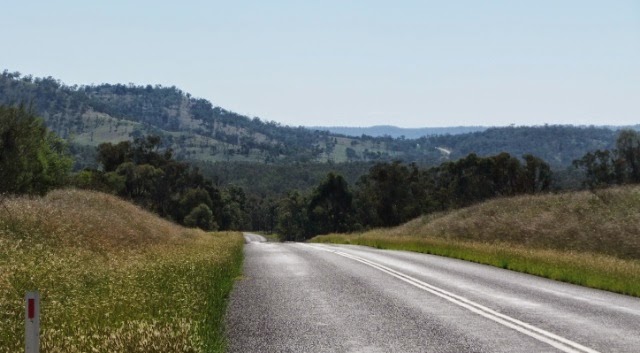 they are okay hills around 500m to 1.5km long (both up and down) and the gradient is ridable most of the time, one or two were 5-7% at the top.  The road is okay to Coolatai.
Just before Coolatai we came across this letterbox ... I think they might be Kiwis! 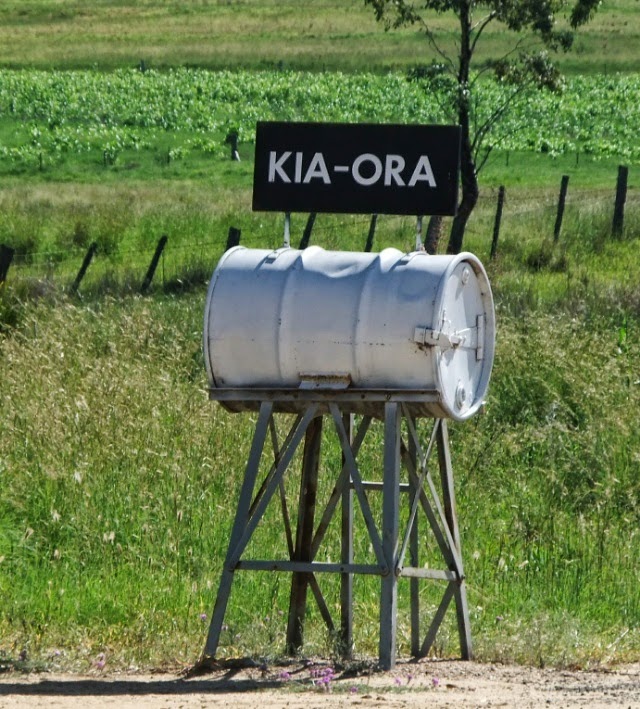 So we had a cuppa at Coolatai and it was tempting to stay there are it had showers and toilets but we pressed on as there were no power points!  From Coolatai the road became bad (different shire), they had a done a little bit of road work since we last came through but not enough really.
Continuing on with my fascination with country letter boxes ... this is a very creative one! 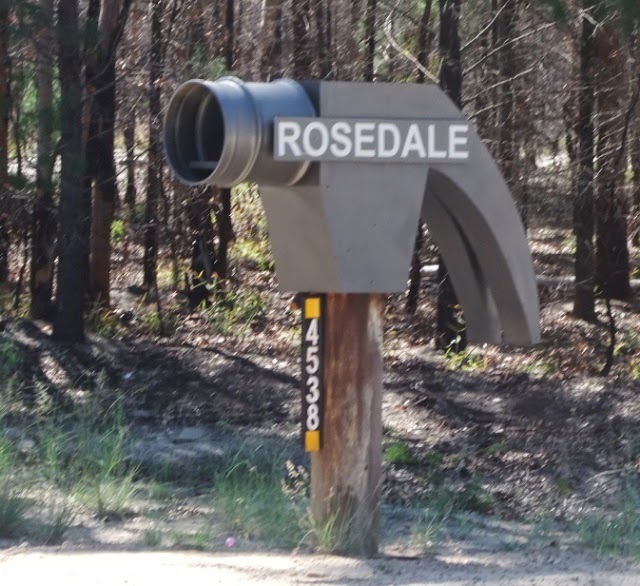 ha shaped like a hammer!
From Coolatai despite the poor road which eventually appears to be resealed but still has the lumps, bumps and cracks it is less hilly, if anything it is flat until 65km and you have your last hill - a 2km climb with a 6%er at least at the top!  Here is our last hill of the day, you can see the hills in the back ground which is basically where we have come from! 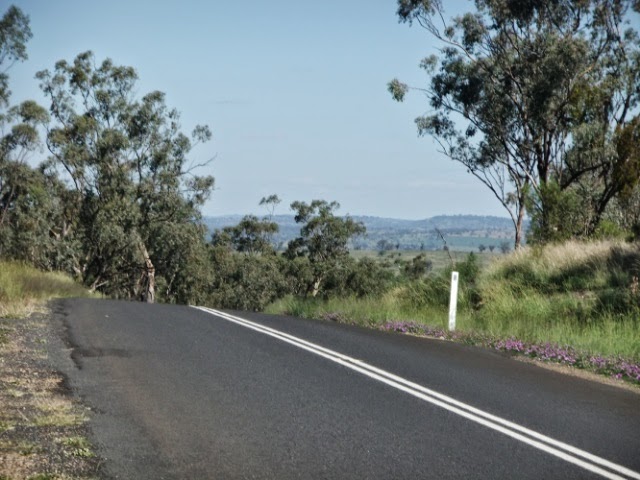 after this hill it is down and along to Yetman and just before you get to the Bruxner highway some nuff nuff put a grid in the road!  I mean who puts a grid in the road when either side has more fencing to keep livestock in than a prison, I mean really! 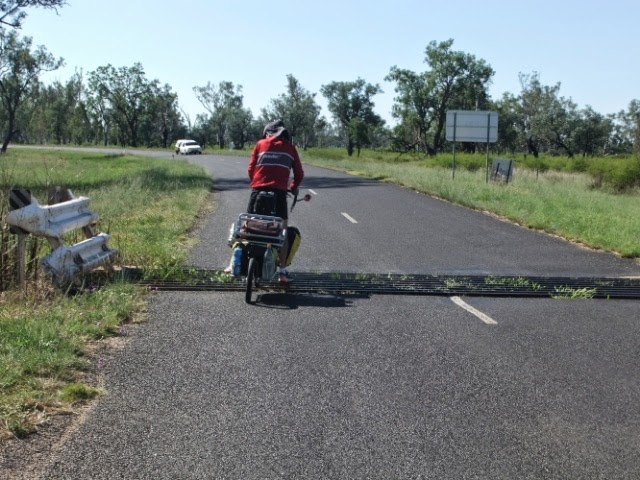 We got to Yetman at 2.30ish and we were exhausted, our first long day in a while!  We will stay here tomorrow (easter Monday) as we think the traffic could be heavy with everyone returning home for work or school.  The caretaker of the park said to Neil that this place was full this morning as there is a fishing contest on until 11.30am so most have gone home, at the moment there is only a few vans and tents here, we think the tents will go tomorrow and more than likely the vans.
Tomorrow is Geelong vs. Hawthorn so fingers crossed the internet is fast enough to cope with it!  Also they have a free washing machine here and we intend to use it ... in the 5 weeks since we have left home this will be our 2nd machine wash!  We do more hand washing!